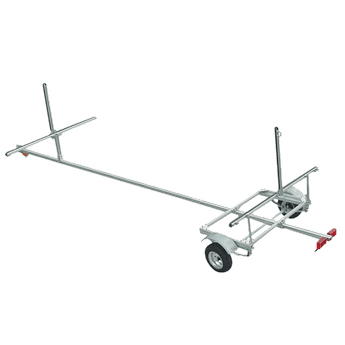 by Trailex
Details
I have been using this trailer since 2005. Easy to pull (and stop) by any car no matter how small. It has been stored outside the entire time, usually with 2 large tandem kayaks strapped down and ready to go. A power wash once a year and a little lube for the wheel bearings once a year keeps it as good as new. Easily transports 4 kayaks or 2 canoes, or any combination thereof. What would I change? The license plate holder is cheap plastic and breaks. When I went to order a new one the shipping from Trailex was 4x what the part price was. Trailex needs to do something with their shipping prices. Other than that it is a solid trailer that gets the job done.

by Thule
Details
I purchased my Hullavator for $65 from a Thule dealer that had not been able to move it. Given the dealer didn't have a demo set up I wasn't surprised as it is quite expensive and I couldn't justify the full cost on anything I had not had a chance to try first. However, I'll try anything for $65.

I used the Hullavator to replace my 30 year old Thule kayak saddles on my old Land Cruiser. Never had an issue loading my single sea kayak with the old set up but my recent purchase of a tandem Loon made me consider different options. Glad I did.

The Hullavator works exactly as advertised. It is easy to load and lifts the kayak onto the rack with little effort. I leave it on my vehicle through the paddling season and have had zero problems with it. It is very robust and if I ever wear out the gas struts they are easily replaced with ones from my local auto parts store. 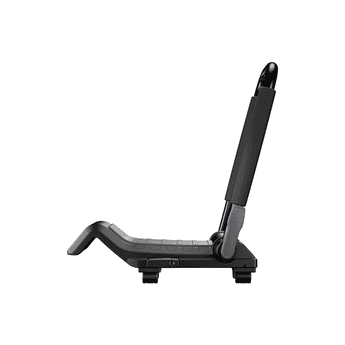 by Thule
Details
I've been using Thule racks on my cars and trucks since the mid-1980's. My kayak saddles (from 1987) have worked well, but I thought I would try out the Hull-a-Port. I wish I hadn't.

They are made to universally fit all bar shapes, which means they do not firmly lock on to the regular square Thule bar profile. When you try to reposition a heavy boat they tend to rotate on the bars. In addition, they are super tall so even my little Audi wagon has trouble fitting in an average parking garage. Gas mileage also takes a big hit. I ended up taking them off and threw them in the corner of my garage and went back to my 20 year old saddles. This is the first piece of Thule gear that I have been disappointed in.

The new version that folds should be better. I may give those a try...

by Olympus
Details
I have used the 770 for 8 months and agree that it is indestructible. I have used backpacking in Alaska (very wet), Utah (hot and lots of dust), climbing in New Hampshire and Nevada (banging it on rocks), kayaking in South Carolina (heat, salt water, and lots of humidity), and a vacation in Europe. It has come through with flying colors. The anti-shake feature is incredibly useful when shooting with one hand.

What don't I like? Battery life could be better, as could the quality of the color. The plastic on the rear screen is easily scratched. However, these are minor issues considering everything this camera can do and survive. Great camera.

by Old Town Canoe and Kayak
Details
I purchased a 160T last year to paddle with my 2 year old son. Although I have several other canoes and kayaks, I didn’t feel comfortable taking him out in a tandem canoe until he learns to sit still. This kayak was perfect for the purpose. Extremely stable, easily paddled without a rudder from the back seat, and, best of all, close to the water. I bought him a kids kayak paddle from Bending Branches and he loves to help paddle (and play in the water). Perfect.

The kayak is quite heavy but I expected Royalex to be. I drive a 4x4 Suburban but have no trouble getting the boat on the roof after 20 years of practice with other boats. However, if I needed to carry the boat long distances I would definitely get a cart. The boat is near indestructible and should serve me well basically forever.

I can’t wait to take my younger son, who will be 2 years old in June, out for his first paddle! His (now) 3 year old brother wants to show him what it’s all about.

by Necky Kayak
Details
I purchased a ‘glass Necky Tesla 12 years or so ago to paddle long, unsupported trips in Alaska, Washington State, and Minnesota. I needed something that could take a lot of gear, was reasonably responsive, and was built like a tank. I have been very impressed with the Tesla. It holds a month’s worth of gear and food, paddles well in heavy seas, and is still fairly easy to roll. With very little maintenance, the kayak has taken quite a beating but has never leaked or broken any hardware. The only downsides I see with this boat are the exposed deck pad eyes and lack of flat compass mounting point. However, I have seen a newer Tesla with both of these issues fixed.

Although I have paddled a lot of other kayaks which had more room, were more responsive, or easier to roll, I have never found one that had all of these characteristics rolled into one boat. Because of this, I am still paddling my Tesla after all of the years. And, I see no reason to change.

by Thule
Details
I originally purchased my Thule rack system in 1985 (for use on a Land Cruiser) and ‘upgraded’ in 1990 to the new style Thule racks (for a 4Runner), so I have a fair amount of experience with these racks. Although I have not purchased much new Thule gear lately, all of my 15-20 year old accessories work great. I use the 58” bars in the winter to hold my ski carrier and box. In the summer I use 78” bars to hold 2-3 canoes or kayaks, plus bikes. Given that most of my gear is so old, it is made of solid aluminum and steel and hasn’t given me one failure. Sure, I broke a fairing when I hit a flying rock at 60mph. And, I’ve lost a few of the nuts and nylon bar ends but these were easily replaced. But never have I had a fear of the rack coming off my truck. I’ve even caught a tree with one of my 78” bars, which bent the roof of my 4Runner pretty good. Still, the rack did not budge. My rack has spent a lot of time in Alaska and Minnesota winters and rust has never been much of a problem, either.

Last year I bought a Suburban (now I have two racked vehicles) and bought a set of Thule #450 Crossroads to mount to the factory rails. I was little concerned about the rack coming loose. Not that the rack would have a problem, but rather the factory rails would rip out of the Suburban’s roof. Happy to say, after several 1500 mile trips to Maine and Hilton Head my concerns have been but aside. This thing is as rock solid as I was used to.

If I have anything negative to say about Thule it would be that fewer dealers seem to be carrying them than when I bought mine. Sure, I can buy off the internet but I prefer to support my local dealers.

In my honest opinion, you can’t go wrong with a Thule rack.

by Wenonah Canoe, Inc.
Details
I have paddled a kevlar Advantage since 1991 and have nothing but great things to say about it. I have paddled it all over Maine, Minnesota, Washington State, Arctic Canada, and Alaska and have never had a single problem. Loaded, it handles well in large waves/wind and responds well to the J stroke. It holds plenty of gear for a 3-4 week trip and is easy to portage. It has also survived running rapids, smacking rocks, and living on my roof rack for 15 years with only a couple of cracks and chipped gel coat. In my opinion, this is the perfect solo canoe for either a quick paddle or an extended adventure.