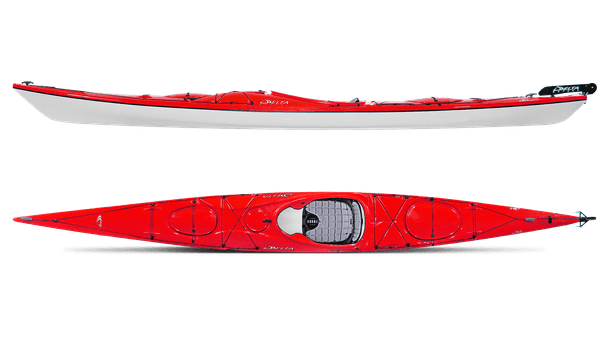 I purchased my Delta 17 last summer. After one year using it, I'm still very happy with this kayak. Its 17 feet lenght and moderate rocker gives it very good directional stability. Even without the skeg down, it shoots straight like an arrow. At 22.5 inches wide, it offers good balance between stability and speed. This makes it a very good choice for day trips. I didn't get the chance yet to test it in heavy swells, but it handles well in choppy waters. The front deck rises slightly and offers room to move my legs when they get sore.

Being made of a mix of ABS and acrylic, it is fairly light at arounf 50 pounds. I have a 14.5 plastic kayak whichs weights more! I'm no strongman, but I have no problem lifting it on the roof of my car.

As far as gear goes, the seat is confortable and easily adjustable. You can move it forward or back in a second. This is really useful when you need a more snug fit in rough waters. You can also adjust the foot pedals without getting out of the boat, which is also convenient. The skeg is released with a simple lock/unlock cable on the left side of the cockpit. No knobs or sliding plastic systems. Keeping it simple is the best way to avoid unnecessary repairs.

Both front and rear storage compartments are very roomy. I didn't see any water in them yet, although I usually don't flip the boat on the water. My only complain is the strong glue odor which is still the after a year, even if I leave the hatches open when in storage in my garage (thus the minus one star). The day pod is well located on the front deck and is easy to access (and relatively big). Finally, the recessed bungee lines are a nice feature that keeps the deck's surface smooth.

As far as appearance goes, it's a lovely boat to look at. Graceful lines and great colors (mine is orange/white). The Solarkote used on the deck gives it a high gloss finish. This may not be an essential feature, but it sure gives the boat some sex appeal! 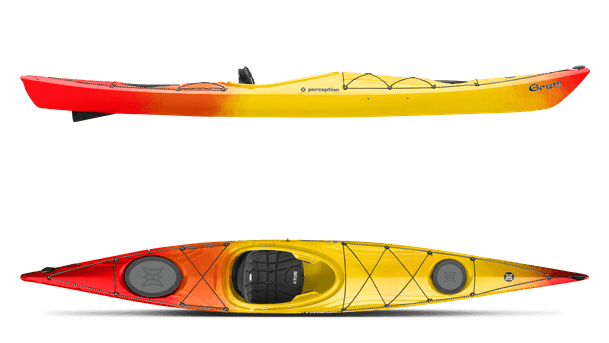 by Perception
Details
UPDATE ON MY INITIAL REVIEW It,s been a year since I got my Expression 14.5. I took it out several times and I still love it. It's easy to carry, tracks well and I think it has superb lines. The only problem was the seat. The boat came from the store with the standard "Zone" seating system. Although comfortable, the high back made it difficult to use a spray skirt. And as other reviewers have stated, it gets in the way when you try to get back in the boat after flipping it. So I ordered the Phase 3 AirPro back band, which is fairly easy to install. Now I have the same level of comfort, but with the bonus of a seat that doesn't hinder my progress as a wannabe kayaker!

by Perception
Details
I recently bought the Perception Expression 14.5 and I'm very pleased with it. I also own an Old Town Adventure kayak which I bought used a few years ago. It's a good boat to learn your kayak basics : it's stable, it rides waves like a boss, it tracks decently and it's roomy with its large cockpit. It's also solid and built like a tank. But it's also heavy for a near 14-footer, probably because of it's width (28 inches). I wanted a better and sleeker kayak to grow into. I had a Necky Looksha IV for a while (one of the older models, bought used again). It’s a beautiful boat, but I found it wasn't for me. I'm 5 foot 8 inches, 200 pounds, so it was a bit of a tight fit for me, and once in position I just couldn't get comfortable. It's tippy and the seat back rest is just too low for me. There's a lot of favourable reviews for the Looksha, but that kayak wasn't meant for me.

This being said, the Perception was on sale at a local store ($895 CND). I had a chance to sit in it at the store, but I couldn't test it on the water, so it was a bit of a gamble. But I had seen favourable reviews on this site, so I brought it home. On my first ride with it I could almost hear angels singing! It felt great: very good initial and secondary stability, very responsive and it tracks very well. Drop the skeg and it shoots straight like an arrow. And once I got the seat and pedals adjusted to my taste, it fitted me like a glove. A nice feature is the possibility to adjust the seat on the fly, either the height of the back rest or the angle of the front base of the seat (convenient if you want a tighter fit in rough water).

The hatch covers are made of rubber, which I think is still the best way to keep water out. The skeg is easy to deploy and bring back in its housing. Generally, the boat looks solid and well built, with good deck rigging. The carry handle are made of comfortable plastics and the boat is easy to carry. Even lifting it on the roof of my car is relatively easy. My only gripe is with the back handle, which is off-center. You have to remember that when you lift the kayak from the back.

I recently took it out on a windy evening on moderately choppy waters and it handled itself very well. It remained stable and rode the waves really well. It's not super-fast (after all, it's not a full-on sea kayak!), but it's easy to bring up to speed.

Last but not least, it looks great. It's a beautiful, well-proportioned boat, built on a British-type design with a moderate rocker. So if you're looking for a great touring kayak at a reasonable price (but which doesn't feel cheap), the Perception Expression should be on your short list for sure.