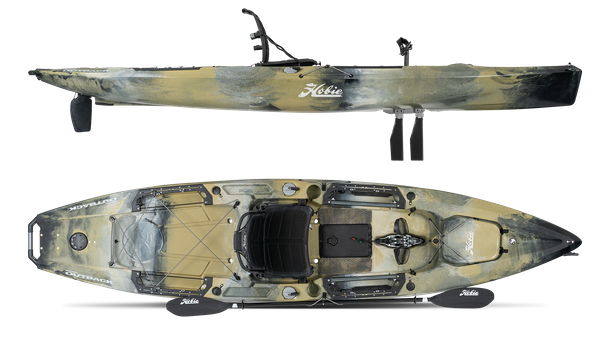 by Hobie
Details
I have been a dealer for Hobie mirage drive kayaks for 18 years since they were invented. Being a hard core fishermen, the Hobie was revolutionary when it was introduced as it allowed a person to move around and fish while keeping the rod in your hand. Over the years Hobie engineers modified and improved the kayak every year. There have been so many changes a book could be written about it all. The 2015 model however is leapfrog in technology compared to all the older years.

The new seat is super comfortable but it also raises you up enough to create a downhill push with your legs. This allows you to develop way more power then with the older models. The new drive now has 24 dlerin needle bearings on all moving parts.

by Delta Kayaks
Details
Ok, I finally got a chance to paddle this bad boy today. It was fast and it was reluctant to turn. I got up to 5.4 mph every time after about five strokes. It accelerated fast and maintained its glide unbelievably even if I skipped a stroke. I haven't paddled much in 12 years so I'm going to put more practice in on it and maybe tuffen up my man boobs.

Turning there was some resistance. I had to lift one butt cheek or drag the blade to turn quickly. Standing... it was as stable as my Pro Angler and easier to get back in the seat. I felt with practice I could paddle all day with a single blade stand-up paddle. This may prove to be this yaks most unique attribute.

I sat side-saddle and pushed it as hard as I could the photographer said I got one pontoon clear of the water without going over. I did weigh it as it carries a lot lighter then 48 pounds but the scale read 48 right on the money. No help needed to lift this thing by yourself on to a high SUV. It paddled into the wind which was about 15 knots with no loss of speed or glide. I think the concave tunnel might actually create lift. Noticed very little disturbance or wake coming off the bow.

I'm 200 pounds and the yak drew more water then I was expecting; about six inches. Footbraces felt rock solid with no flex at all no matter hard I tried. Hardware looks to be all stainless. The paddle lash was also rock solid I could barely move it once locked in.

Overall the only yak in its class I can compare it to are the Hurricanes I used to sell. It tracked much better and the stability isn't even comparable. With practice, I think I can polka on the catfish. I never GPS'ed a Hurricane so I cant compare speed but 5.4 MPH without paddling the last decade surprised me. I used a 240cm full carbon Werner.

P.S. Delts has just come out with a rudder system for the Catfish which should deal with my only complaint about how the Catamaran turns. With the rudder system I'm sure it would get a 10.

by Dimension
Details
Sorry to inform you all that Old towne or more accurately JOHNSON OUTDOORS has decided to end making the entire Dimension line. I've sold many thousands of these kayaks over the years and will be sorry to see the Spirit, Typhoon and Cricket go.

by Dimension
Details
Old Towne has owned dimension for 15 years they have decided to end the dimension line and have destroyed the Typhoon mold. You will never see another new one of these awesome kayaks again. If you have one it has just increased in value.