by Venture Kayaks
Details
I have owned an orange Venture Easky 13 since 2009. I am over 6'3", and aside from being a bit tight in the cockpit, it is comfortable, lightweight, easily maneuverable in tight, fast flowing rivers and handles large lake swells with ease.

I gave this boat a nine out of ten because I had to remove the footrests, but after that the cockpit is adequate for someone of my height/weight. With the skeg deployed, it tracks like it's on rails. Very sturdy plastic, and maintains its shape even on the hottest days. At 46 pounds, not too heavy to carry solo. Get compliments on it everywhere I go. Too bad Venture has dropped this kayak from its lineup. A great paddling boat for beginners to advanced.

by Eddyline Kayaks
Details
Bought the 2000 version of the Merlin XT in Carbonlite. This kayak is finished inside and out very very well. Anyone considering this kayak should definately TRY IT OUT before purchasing. I bought mine in the winter and didn't try it first. Cockpit opening was a major problem-too small for tall/heavier people. Definately a smaller-person boat. The hard plastic seat and seatback were also numbing after only a short distance. I think my biggest gripe was stability. Think you might like to quit paddling the Merlin XT and take a break? NO WAY JOSE! Unless you want to do eskimo rolls. Just sitting still in the XT was a feat only a high wire artist could appreciate. I have never sat in a kayak so tippy in my entire life. It has a pronounced V hull, and even at 23 inches in width, this thing was like straddling a torpedo. You simply couldn't take a rest or God forbid try to open your sprayskirt for a drink or a snack! I gave it the benefit of a doubt and took it out on three different occasions in three different environments to see if it was just a fluke, but I came away disliking this kayak more each time. Luckily, I sold it for more than I paid for it, so that wasn't disappointing. Definately NOT a beginners kayak, and not one for taller/heavier people. Quality and workmanship are top-notch, however the carbonlite isn't that light in weight. The newer version of this kayak has a much larger cockpit opening- but that still doesn't address the stability issue at all.

by Perception
Details
Having owned and paddled the Perception Vizcaya I must now update my earlier review. I finally purchased a Perception Vizcaya in 2000 and sold it in 2002. I think the major reason I didn't keep this kayak was its weight. At 65 lbs empty, it was very cumbersome to lift (especially alone!) and even with help it was awkward. I also didn't appreciate the smallish front and rear cargo areas, or the loose fitting day hatch much either. I am a larger paddler, at 6'4" and 210#, and this kayak was one of a very few that I could actually fit into and still have some room. Actually, as it turns out, it had TOO MUCH room! Trying to pad it out as I may, it still didn't provide me with a secure enough fit for edging and bracing that I wanted. The materials and workmanship however, were top-notch. I especially liked all of the deck rigging! The seat was nice too, but the seatback was lacking in support. The rudder was almost impossible to deploy, and very hard to bring up and get into that slot on top of the deck. This kayak is very hard to turn in wind! Without the rudder to help, you will build massive muscles trying to turn the Vizcaya in winds over 20 mph.

I guess my biggest gripe is the weight. I loved the shape and look of this kayak, but at 65 pounds, and my 210 pounds, and 60 pounds of cargo, you are paddling in excess of 335 pounds. Try pushing that around in a shopping cart! So, I bought a smaller, much lighter kayak (29 lbs!) and will give my impressions of that one later this summmer. The Vizcaya is a comfortable, stable kayak for inland lakes and rivers, and is a good beginners kayak, but just be young and strong enough to lug it around and just pray that you don't have to paddle it into the wind or far from your put-in after your arms are worn out. 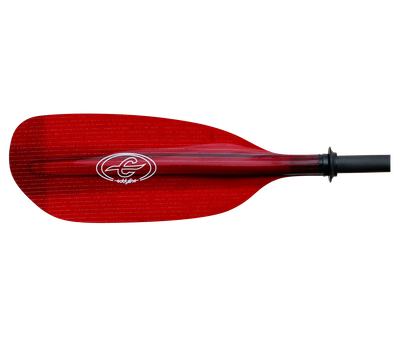 by Eddyline Kayaks
Details
My paddling buddy bought a Swift narrow blade fiberglass paddle this spring and I was foolish enough to try it. Now I am smitten. This has to be one of the best if not THE BEST, lightest, most comfortable sea kayak paddle there is. The paddle is virtually indestructable (the salesman banged a blade against a cinderblock wall repeatedly to show the strength)comes in some really swift colors, and feels like holding a feather. There seems to be no weight to it. Beautiful finish and nearly seamless ferrule. Expensive yes, but will spoil you for life.

by Perception
Details
I test paddled the Perception Viscaya last year and this year (2000) and still find this boat to be exceptional in every way. It is easy to get into and out of, a major consideration for someone who is over 6'3", and has one of the most comfortable seats on the market. The boat is made of a thick polypropylene plastic that stands up to anything you can throw at it. The Viscaya paddles with ease and turns and stops very well. The boat tracks remarkably well without the rudder, and even better with it's great steerable rudder system. This boat comes in some really cool colors too. I think I like the red or yellow the best. The hatch covers are flush-mounted, easy to open and close, and are for the most part water-tight, unless you paddle it upside down. I think the overall finish and quality is excellent and the rudder system and moveable seat are really great features the others should be copying! Storage is adequate for a 16 footer, and that day hatch is wonderful. All in all a great sea worthy boat full of features for a mere $1,375.00. I think the design of the boat is also unique, with it's long waterline aids in tracking. A great boat worth serious consideration!