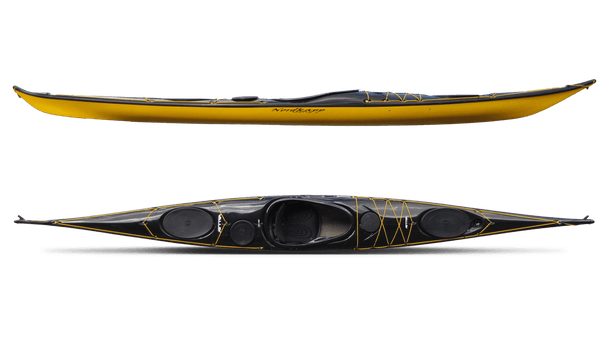 by Valley Sea Kayaks
Details
I bought one in early September, so it's been only 3 months now. For reference I am 5'8" and 200 lbs. I have been paddling a plastic PH Capella for 4 years. I've paddled friend's boats and tested several others over the past year searching for a new one; including: PH Cetus, Impex Cat 4, Capella 173, NDK Explorer, plastic Valley Avocet, a full size Nordkapp and WS Tempest 170. The Nordkapp LV stood out dramatically from these others. As always, these observations are mine and I may be crazy.

In three months I've had the boat out in a variety of conditions, including: 1 to 2 foot wind slop, clean 6 to 8 foot ocean swells, surfing 2-3 foot breaking waves, and a lumpy tide race east of Fisher's Island in LI sound. I've paddled with winds up to 25 kts coming from every direction.

Sitting still, the boat definitely has less initial stability than all of the other boats I've paddled. However, the lack of initial stability translates into much finer control in conditions. The Nordlow feels like a coiled spring full of potential energy, like it is just waiting for you to tell it to do something. Paddler input is instantly rewarded with a crisp response. It reminds me of a high performance sports car with really tight suspension and steering, any tiny movement of the steering wheel and the car responds instantly, no sway, no slop, no delay. Exhilarating, but pay attention!

As far as I can tell, there basically is no secondary stability; it'll edge over as far as you want to take it. Combine this with its very narrow ends and high rocker and the boat can be turned very fast. With some speed, aggressive edging and a solid low brace you can stand the Nordlow WAY up on edge and whip it around really quick for a 17 1/2 foot boat.

On a 3 mile crossing we had a 20 to 25 knot tail wind and surfed 3 foot swells all the way across. The boat was very well behaved. No sign of yaw from off angle waves, no difficulty keeping it on track. Counter intuitively, the lack of stability while sitting still on flat water translates to good behavior in random, confused waves. Those waves quietly move under the hull without affecting the boat’s equanimity or path. Quartering headwinds will cause weather cocking that is easily eliminated with a little skeg.

In larger ocean swells (6-8 ft) the boat again proved to be very well mannered; in fact, surfing steep, nearly-breaking 8 footers was one of the highlights of my kayaking career. I can't quite say the same for surfing smaller, breaking waves. In steep 2 -3 foot breaking waves I had some trouble keeping the nose out of the water. When the stern is lifted and the boat picks up speed down the wave, the narrow, needle-like bow wants to pearl. Much of that may be my lack of skill, I’m still trying to figure out the positioning and timing needed to surf a longboat. Still, I seem to surf better in the Explorer, Tempest and Avocet; all show less tendency to pearl in breaking surf than the Nordlow. It is fine and fun in smaller, breaking 1 to 2 foot waves.

It rolls very easily. Despite the fact that I've been rolling in the Capella for 4 years I find it much harder to roll than the LV. The Explorer rolled almost as easy for me as the LV.

The most obvious characteristic of the boat is its speed- it is fast! None of the boats mentioned responded as quickly and efficiently to a forward stroke; it jumps forward. Once at cruising speed it feels much easier to maintain the pace than most of the other boats. The Cetus felt pretty efficient at cruising speed as well but was nowhere near as quick or responsive (although it'll easily carry a month's worth of gear which the LV won't.)

Overall my impression is that the boat requires more attention than the other boats I compared it to but the benefits are that it is faster and responds quicker than any of them. It also handles rough, confused seas and high winds at least as well as any of the other boats I've paddled. It is probably not the best choice for long-boat surfing or long distance camping but it is serviceable for those activities. I love the boat.