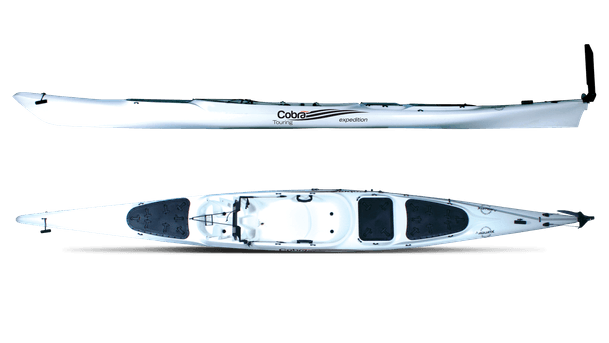 by Cobra Kayaks
Details
I originally got the Expedition for kayaking through the surf and in the ocean. It worked ok for this purpose but it was very, very slow turning around in the ocean. I replaced the Cobra plastic foot pedals with the updated aluminum foot pedals that Cobra sent me for free. I also replaced the weak stock plastic rudder system with a Feathercraft rudder system with their tandem (large) aluminum rudder blade, which has more area and is longer than the plastic stock Cobra blade. This works better than the stock rudder system, but the Expedition is still slow turning around in waves.

I now use another sit on top in the ocean and am learning to paddle my Epic V10 sport surf ski, so the Expedition will be used more for fishing. It fits me well, allows one to sit side saddle and cast, and has a lot of (narrow) storage space under the front and rear hatches. However the 20 ft Epic surfski turns much faster than the 18 ft Expedition, so the long rear keel must affect its turning radius despite the large rudder. 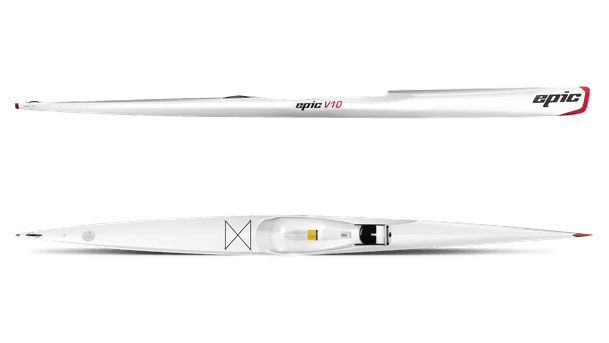 by Epic Kayaks Inc.
Details
I have a fiberglass V10 Sport. Adding the Epic foam seat pads helped a lot in making it more stable while learning because the cockpit, unlike most surf skis, is designed for people with very wide hips.

by Bell Canoe Works
Details
I am surprised with all the 9 and 10 ratings for the Bell Rob Roy which is completely different from my experience. I bought a new fiberglass Bell Rob Roy about 10 years ago and become very unhappy with both the Rob Roy and the manufacturer.
I've owned about 15 kayaks, several high performance canoes, and many years ago a Bart Hauthaway Rob Roy (Sugar Island). I paddled the Hauthaway Rob Roy for about 10 years, was familiar with its limitations/strong points and thought the Bell Roy would be a higher performance version of my earlier Rob Roy (and I was seduced by the Bell's wood trim).
After a short test paddle I bought a new Bell Rob Roy and discovered that the Bell Rob Roy is very much a compromise, being neither a good canoe nor a good kayak. It is too wide to lean or brace with your knees to control like a kayak and with too low seating for a good canoe paddle stroke. I called Bell about adding a kneeling thwart to paddle canoe style as their website site suggested and they recommended this option. After buying and installing the overpriced kneeling thwart, I found that it was too low to comfortably lean on and could cause entrapment if you dumped the Rob Roy, so the kneeling thwart was worthless. The original backband was very poorly designed so I upgraded to a better backband design. The Rob Roy was very stable for fishing and had a lot of accessible room for tackle, but not much fun to paddle as a kayak, if you are experienced and used to better designed kayaks.
The final straw was that the seam connecting the top and bottom of the Rob Roy was covered by cheap vinyl tape that came off in the first month when I bumped a dock piling in landing. It exposed a rough ugly gap between the top and bottom halves of the hull with raw fiberglass tape in between. All of my other composite kayaks, including the 30 year old Hathaway Rob Roy had either a fiberglass outerseam or durable plastic H seal connecting the top and bottom so I could not believe that a quality manufacturer would overlook this design flaw. I called Bell, including the president to complain and they said they had fixed this design flaw in the current years design but would only send me another roll of vinyl tape.
Unhappy with both the Rob Roy and the manufacturer, I traded in the 6 month old Rob Roy on consignment. So much for Bell quality. I recently ran into the person who later bought my original Bell and he had similar impressions about the Bell Rob Roy.