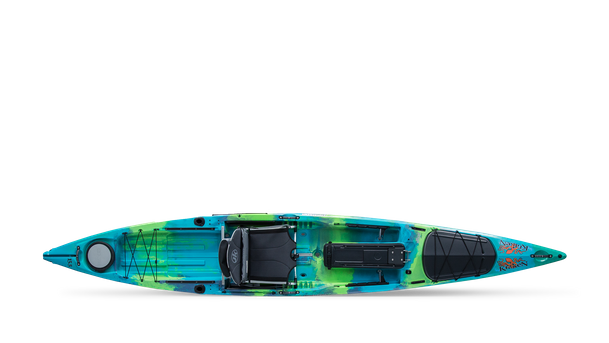 by Jackson Kayak
Details
I primarily use my Kraken out on the Chicago portion of Lake Michigan. Now arguably, Lake Michigan behaves more like an ocean than a lake with waves/swells plus there's the massive amount of recreational boaters on the water. I'm happy to report that this yak just excels at handling big open water!

Water trail access to LM here in Chicago is through Chicago Park District beaches so its all surf launches. The Kraken can really push through the surf and cut through the waves to get you out into the open waters without taking an unexpected swim (provided you know how to paddle through waves). Once out in the water, paddling 3+mi to get to the fishing spots is fairly quick and more importantly, I don't feel tired or fatigued before I've even begun fishing.

When I'm out on Lake Michigan I'm there to fish the day, I'm talking 8+ moving around chasing baitfish so having enough water/food/snacks/etc is never an issue. Between the center hatch, access to the hull under the center hatch, and the storage space area behind the KKrate, I can put all that I need in all of these areas. The front storage hatch is big enough that I can breakdown and store my C-Tug trolley easily.

The Elite seat 3.0 is COMFY! Let's get that out there right away plus the ability to "trim" the seat forward and back really helps when you have a heavy load on the yak. Depending on the water conditions you can adjust your seat to raise the bow or lower it to cut through the waves, etc etc.

The Kraken is fairly slim coming in at about 30" wide but it is stable! The biggest point to make when speaking about the Kraken's stability is that if you're used to paddling wider yak's, or never paddled a kayak before, the initial feeling is that its not stable. The reality is that you need to acclimate yourself to the Kraken and learn it. Put in the time to just paddle it, push its limits, purposely rock side-to-side to try and flip it...once you gain confidence in it, you'll really see how stable it is. However, if you like to stand this isn't the kayak for that!

My first couple of times loading/unloading it I accidentally dropped it and it held up very well. Superficial damage only so it seems really durable to me. The Kraken is ready to hit the water and fish right out of the factory! For the price you pay, you really get a lot of features and that to me is what attracted me to purchase this yak.

My only critique for improvement is the front handle. Because I'm almost exclusively launching from the beach with a full load, it can be a challenge to haul the Kraken 50+ft through the sand to the water to launch. If the handle was perpendicular to the yak it would allow me to use more of my forearm/bicep/arm/shoulders into pulling the yak through the sand. Because it's currently positioned length wise, it doesn't allow you to use more of your stronger muscle groups in your arms. Outside of the sand however, it's not much an issue I will admit though.

Overall, great value, great features, great performance. If you fish BIG open bodies of water....Great Lakes, Big Reservoirs, Offshore, you should really consider the Kraken and if nothing more, give it a test paddle!