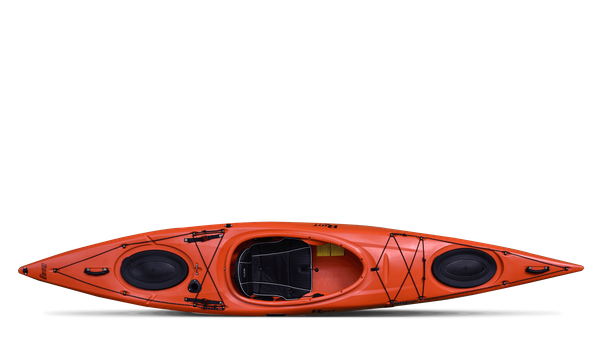 by Riot Kayaks
Details
I have owned my Edge 13 now for close to a year and am convinced that this is the most kayak you can get for your money. For a shorter kayak of just less than 13 feet it has two bulkheads, grab lines and bungees all the way around the kayak, two rubber hatches, a fishing pole holder, thigh braces and a skeg.

The kayak is good thick plastic - tough and durable. It is very stable. With the skeg up it paddles well and turns easily. With the skeg down it paddles straight and fast. I have no problem keeping up with 17 foot touring kayaks. I have fished out of it several times and it works fine, but lacks most of the conveniences of a sit on top. The rubber hatch covers don't seal well, but at 25 inches wide and very stable, this is not a kayak you would roll, or dump easily.

I got mine on sale and then used the membership 20% off coupon at the REI outlet. This boat has popped up there a couple times since I bought mine. I highly recommend it as an all around, do anything recreational kayak.

by Riot Kayaks
Details
I picked up the Riot Edge 13 from REI's online outlet store with an additional 20% off the outlet price. All my other boats are 17-18 foot boats and I wanted a crossover boat for creeks and rock hopping in smaller water ways.

I have never seen a rec boat that has as much to offer as this one. It is not as wide as most rec boats and paddles very well. It tracks great with the skeg down. The seats are extremely comfortable and highly adjustable. It has almost every amenity you might want (two bulkheads, fishing rod holder, rescue straps for paddle float re-entry, two drain plugs, one for the rear compartment and one on the side of the cockpit, thigh braces, adjustable foot pegs and lots of deck straps). It even has a netted storage above the legs under the deck.

The only thing I am disappointed with is that the hatch covers seem slightly too big for the hatches and will most likely not seal well if the boat goes over. Even for a higher price than what I paid, this is an excellent rec boat, but with REI's current sale, it is a steal. I gave it a 9 because of the hatch covers.

by Skwoosh
Details
I have been using this pad for about three months in my Impex Force 5. Before this pad I would start getting a sciatic pain in my right leg after 30-40 minutes and within an hour it was almost unbearable. I can paddle for hours now without any pain. It stays put where you set it on the seat and the gel pad provides maximum support and protection without being too thick. I highly recommend this pad, especially for hard fiberglass seats.

by Wilderness Systems
Details
I am not going to write a lengthy review because pretty much all the good and bad has been said. In Summary, the 145 is slower than the 140, very stable, tracks good even without a rudder, the hatches leak, and is, overall, a very good buy for the money, especially when it goes on sale.

What I want to address is the hatch covers. When I took my safety class, we used the 145 and the Tempest 170 with the same problems on both. Whether doing an assisted rescue, or a self rescue, it was very difficult to get back in the kayak without going over the top of the rear hatch, and invariable, the cover came off, collapsed, or the seal was broken, and on the next go around it leaked very heavily. I ended up including in my rescue, the step of replacing or re-sealing the hatch while laying on my stomach with my feet in the cockpit before I could turn around and slide into the cockpit. This alone makes it totally unsuited for serious touring of any kind, because if someone were to go over in rougher waters. It would be easy to swamp the back end and quite a chore to balance on the back trying to fix the hatch before securing oneself into the cockpit. If they were to fix this, I could probably give this kayak a much higher rating.