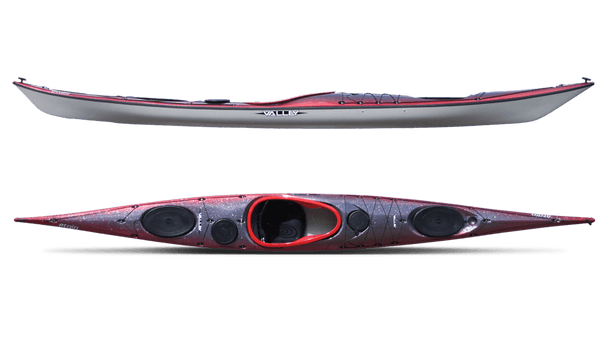 I purchased the kayak used in very good shape, but

I must also divulge my own specifications. I consider myself to be an intermediate paddler, well past my golden years, and stubbornly committed to not advancing my kayaking skills further. I am a hefty 140 pounds and a lanky 5’ 5” in height. Over the years I have owned many sea kayaks including a variety of Brit boats; so I have at least some perspective.

The kayak fits me well. The cockpit is easy for entry and exit. For example, on entry, I can plop my butt on the seat and then pull my legs in. The fore deck is higher than for a true LV kayak, leaving room for my feet. I am not a fan of deck pods just fore the cockpit because they encroach on foot space. However, this Étaín has a (removable) deck pod which is shallow and does not have that effect. In particular, I wear size 11 water shoes over my bulky dry suit socks, but can easily take my feet off the foot braces and stretch out my legs. This is not true in my bigger Classic P&H Cetus, whose deck pod is in my way if I want to stretch out my legs.

The seat is configured so it can be moved, either slightly forward or slightly astern from its middle position as delivered. This is not all that easy and the seat is best moved by tiny elves who are also very strong. Nevertheless, I moved it astern and ensured that the backband was also further back. Next I supported the backband with minicell foam to keep it firm and vertical – requirements dictated by an old lower back injury. Moving the seating astern reduces weathercocking and allows me to get the spray skirt on with reasonable ease.

I haven’t had the kayak for long, but am pleased and expect it to be my favorite. The weather here is still cold with water temperature around 5° Celsius. So I haven’t tried rolling, but am confident it will be as easy to roll as my Cetus. If not, my Cetus will again become my favorite. 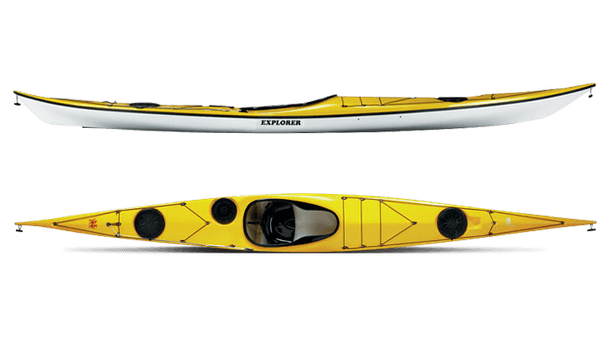 In mid summer of 2016, I purchased an older (1996) NDK Romany Explorer which is nowadays sold as a SKUK Explorer, of nearly identical design. This kayak was dirty and disheveled, even a bit stinky. However, it was fundamentally sound and featured a well known classic design. I cleaned it up, added new rigging, a paddle park, a keel strip, a new back band, and fixed a minor rear hatch leak. It was my intent to then sell the now enhanced kayak.

At this time my primary kayak was a Mariner Express, also a cult classic – quite famous for needing neither rudder nor skeg. It certainly lived up to that reputation. However, I was learning to roll and was having a hard time rolling the Express, even with my very supportive Pawlata roll. I failed more often than not and was essentially making zero progress. I consider a roll to be an important safety technique. So I was discouraged and, at 76 years old, was almost ready to forget rolling.

On a whim, I decided to try rolling the NDK. In my first session, I rolled on each of my 17 attempts. The rolls were shaky, but this was very encouraging. Was this a rolling breakthrough? No, on returning to the Mariner, I was about the same as earlier. So I stuck with the NDK for many weeks, until I knew where I was underwater. My technique had really firmed up. At this point I tried the Mariner and was quite successful, although the rolls were again on the shaky side.

So, for starters, I would say that the NDK Explorer is quite easy to roll, even for an elder. The kayak is 17’ 8” long and with a 21.5” beam and has enough rocker to be maneuverable. It isn’t a really fast boat for those dimensions, but it is certainly fast enough. It has a rope skeg, which I rather like for the ease of repair. However, I have yet to actually need the skeg – this kayak is quite neutral, maybe not so much as the Mariner, but not significantly inferior.

I have not weighed the NDK. but it is clearly on the heavy side. The older NDK kayaks are very sturdy, considered somewhat bombproof. The kayak may be slightly roomy for me at 5’ 5” and 145 pounds, yet I rather like that. I’ve read that the NDK Explorer LV does not have room for my hooves, so the standard model is the appropriate one anyway.

I am not a kayak camper, but would note that the NDK (with skeg box lurking in the rear hatch) reduces your packing options. This would not hinder a backpacker at all, but I would need to become more efficient in terms of what gear to bring for an extended trip. Further, I like to keep my deck relatively clean.

I’ve owned my share of kayaks, and would rank this as the best of those. These kayaks would include: - Seaward Endeavor - North Shore Calypso - NDK Romany (classic) - Boreal Design Ellesmere - Mariner Express This isn’t quite a fair comparison, because my skill level has evolved as well. Finally, if the kayak were lighter, I’d be a bit more pleased, but otherwise I am happy.

by Jackson Kayak
Details
Rec kayaks occupy a very different niche than sea (touring) kayaks. Nevertheless, in either case safety should be paramount. The Ibis does not have sealed bulkheads. This defect can be mitigated by purchasing, maintaining, and always using float bags. Most buyers will not do so. Consequently, they would be better off purchasing a rec kayak with fore and aft sealable storage hatches; such kayaks do exist. Those who already own the Ibis should discipline themselves to use float bags or else stay in shallow water.