by WindPaddle
Details
I love sailing the lake on good days but packing out even the small sailboat can sometimes be a pain. The WindPaddle lets me rig my 13'6" tandem as a pretty decent flat-top sailer with much less effort than a sailboat. Of course, it's not a sailboat and this sail doesn't take up very much wind and it really doesn't catch well beyond about 120` but it's very easy to rig and incredibly forgiving on the water. Almost makes me want to rig a mast on my SoT and take for a real sail...

by Islander
Details
I got this basic SoT second-hand about a year ago and have since put it in flat lake, slow river, and ocean. It really shines as a very forgiving beginning paddler boat on flat water.

It's rather slow to the paddle. Not a bad thing for a beginner who will be making paddling mistakes but perhaps annoying for someone who wants a boat that cuts the water more cleanly.

Once underway it tracks very nicely, well enough for a beginner to comfortably stay in a group without having to fight the boat.

The cockpit is sufficiently large to make entry/exit easy and deckside storage is well designed.

As with most SoT this size, it's pretty easy to load and move about by one person though a adding a strap to the back instead of relying on the molded-in handle makes it a touch easier to manage. 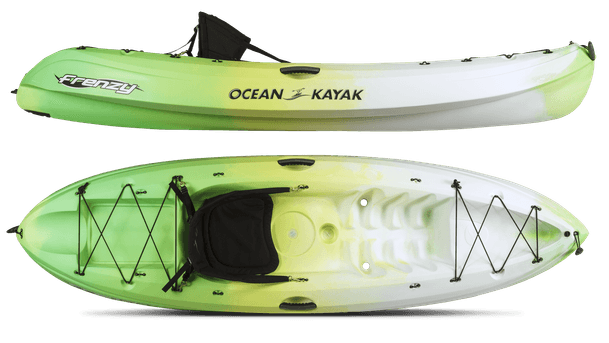 by Ocean Kayak
Details
I have to give this one a solid 9, for what it is, it's a great example of the type and rather inexpensive when considering the quality. Given a choice of this kayak or my surfboard for the beach, I load the Frenzy. It's also the kayak I loan out when teaching friends on the flatwater who've never kayaked before, it's a great beginner SoT.

It's a 9' long, 31" wide wave catcher ideally suited for ocean surf. I'd not mind if it were a touch shorter and a touch narrower but these dimensions seem to make for a very-very stable boat in the waves that tracks straight to shore. A huge plus is the weight and portability - it's just no big problem getting from truck to surf over the sand.

I've also had it in the lake and on flat river. It does reasonably well out there. It's not as maneuverable as a touring yak but for an SoT it does remarkably well and sits low enough in the water to be stable in wake. If you're just floating around or doing some fishing it's fine - you'd no t want to do a long 'yak tour in it since it's so wide that it can be hard to get going and harder to turn quickly. But for recreational floating, it's great. It's also really good for beginners who need a very stable boat that doesn't answer too quickly to paddling mistakes.

by Crescent Kayaks
Details
We got this for those days when we wanted to spend some closer time together and/or only load one boat for the two of us. It's a great tandem for recreational flatwater on the lake or river.

The biggest plus is the incredible stability. You can't turn this 'yak over if you try. You'll fall over the sides before you flip this thing. The 34" width isn't so wide that it's unmanageable though, it paddles very well for a great big 12' 80# (rigged) SoT. It cuts the water as cleanly and as fast as any of my single SoT's and faster than some.

Larger paddlers and heavily rigged fishermen will appreciate that the design allows for paddling from the center seat. The 450-500# capacity makes this a great single SoT for folks who are concerned about overloading a smaller single boat and flipping it.

Another huge plus, if you're the handy with tools type, is the ease of working on this boat. This kayak is particularly easy to customize and rig if you'd like to add components that don't come standard.

I can't say enough good about this particular model as tandems go. It's definitely not the same as some of the models that cost 2x or 3x as much and it's certainly not a touring 'yak. But as recreational flat-tops go, this is a very well designed boat with all of the stability anyone could ask for in a tandem SoT.

It would also make for an exceptional camp/rental kayak.
[PS: take it into the ocean and use it as a longboard - it's wide enough to stand on. Total blast!] 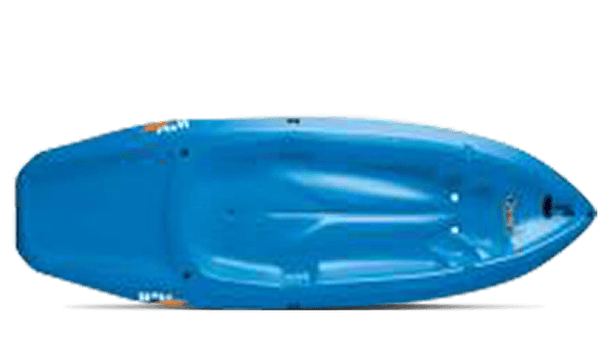 by Lifetime Products
Details
Don't think age, think size! It doesn't matter that someone is 10 years old if they weigh 165# (too much for this boat) and it doesn't matter if they are 40 years old if they only weigh 100# -- this is a light capacity (<130#) wide-bottom SoT. I'd hazard that it's even better at <100# because at max capacity it takes on a lot of water of the top and sits very low.

For very small paddlers (5-8 year old), with close supervision, it's a good and very inexpensive introduction to kayaking but there are some better options out there if you're serious about teaching them. It's cheap enough to buy several though and that's a big plus. They weigh next to nothing!

At 34" and only 6' long - it's a particularly stable boat that will only flip if you're overloading it. And, the design is such that it's pretty easy to remount if they happen to fall over the side. As a real paddler, it handles sloppily. It wants to go straight once it's moving and it becomes really hard to change direction. The assumption being, I assume, that little paddlers need the stability over the maneuverability. They won't be able to make this boat keep up in a group.

Overall, not a bad buy but don't think you can push the capacity too much and end up with a short and wide 'yak for an adult much over 100#. The quality of construction is minimal to match the price but it holds up in lake/river just fine and is a great little wave rider for the younger ones.

by Islander
Details
While this is an out of production model, it's coming up on the used market more than a little. I picked one up for $100 and gave it a whirl.

It's tippy! No question. I'm 5'4" and 136# and I can tip it. It's plenty answerable and tracks nice for me though. And it's very easy to launch. Not so easy for re-entry though - that's just not really going to happen. For an fat-bottomed SOT it's very fast. I floated it plugged and unplugged - I got a bit more stability unplugged and it really didn't take on much water for me. The cockpit is pretty deep for an SoT.

My buddy, 6'1" 325# tried it out. Once he managed to get in he didn't make it far at all before turning it over. Several attempts and he gave up on it.

My take: this boat is really nice if you happen to be under about 5'7" and 175#. Kids, teens, small adults will handle it exceptionally well. As the user is taller-and-taller, the boat is less-and-less stable. There's an obvious center-of-gravity conflict with the center-of-bouyancy if you're on the 5'8" and taller side of the spectrum.