Favorite paddle by far, worth every penny. I'd give it five stars except for something I'll get to later. There's a bit of a learning curve coming from a European style paddle but it's not too bad. Once you figure out that the stroke is different (canted) then it becomes very powerful, even when bracing with the narrower blades. Super strong, super light, very easy to keep pace with (or outpace) people with Euro paddles. The blades are much thinner than any wooden paddle I've ever seen. I love the shoulderless design, there's enough of a change in the shape of the shaft that your hands still know where to go for a forward stroke but it's really easy to slide the paddle to one side or the other for a really powerful sweep stroke.

I've had my Kalleq for about 8 months and it has many miles on it now. It's what I reach for first (my other paddle is a fiberglass Werner Shuna and it's great too, just different) every time I go out; it's a great piece of gear. They even give you spare parts and tools to replace the tips should you need to. The pattern of the carbon fiber makes this thing look like a work of art once it's in the water and wet.

The only reason I'm not giving this 5 stars is because when I got my paddle it came with a little slip of paper encouraging me to give it a great review on a site such as this in exchange for free stuff. That left a bad taste in my mouth at the time, I questioned the quality of the paddle as well as the honesty of a lot of the reviews I was reading. I declined the free stuff as opposed to writing a review for something I'd spent minimal time with. So Gearlab, if y'all are reading this please note that you have an awesome product that you don't need to bribe people to speak highly of; the Kalleq speaks for itself and it's amazing. 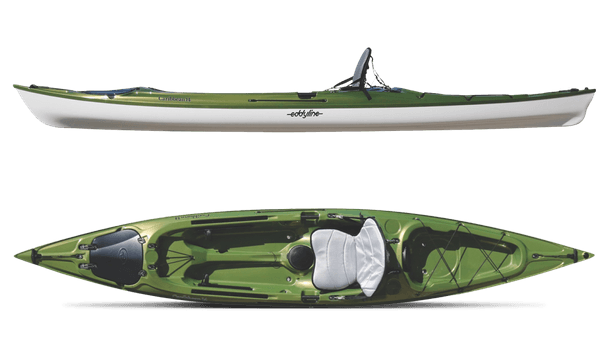 There's really no other SOT quite like a Caribbean 14. I purchased one in 2018 after owning a thermoformed WS Tarpon Ultralite 12 and renting Hobie and Jackson boats. I enjoy kayaking with a paddle, I don't really care about pedal drives, and I love that I can easily move this kayak around by myself thanks to the rigid handles in the middle of the boat; I just pick it up over my head and take it where it needs to go. I'm not terribly strong but the boat is super light given its size.

I use the Caribbean in the Louisiana marsh to chase redfish, speckled trout, and black drum. In this environment it's had collisions with oyster reefs, barnacle covered concrete, countless submerged tree stumps, and it has been bottomed out a few times when a large ship went through the bayou too fast and sucked the water out. This yak is tough as nails and has handled it all like a champ but I also do my best to take care of it. Anyone that says thermoformed kayaks aren't durable haven't paddled them at length. It's a very fast SOT, the last time I tried I was able to sprint it faster than my 16.5' sea kayak.

As far as handling, it glides like a dream and it's quiet. As a result, I've been able to catch some sizable redfish by just drifting up on them as the energy from my paddle stroke waned; all I had to do was make a 5' cast to plop a spoon in front of their face. The Caribbean wasn't designed for this, but in calm protected water I have little problem standing up if I want to cast further. The more I paddle the boat the less I do this, I just try to be better about sneaking up on the fish.

On the other end of the handling spectrum, I've taken the Caribbean 4 miles out, fully loaded with 2 nights of camping/fishing gear, in a 17mph tailwind with waves and it got me where I was going. Aside from having to be super mindful of not getting thrown sideways by the wind/current it was manageable but not advisable... I wouldn't do that trip again in this boat but it also wasn't designed to be in open water like that.

My only gripe with the Caribbean is that the seat sits a little high. The seat is plumbed to drain water and in the conditions it's designed for it's a very dry ride. I'd take a lower, wetter ride in exchange for getting blown around by the wind less. That said, if my Caribbean were destroyed/stolen today I'd order another one tomorrow. Such a great boat!