One of the lowest-risk and most effective techniques for reaching a victim is by use of a throw rope. In this article, we're going to take a look at the basics of using a throw rope. 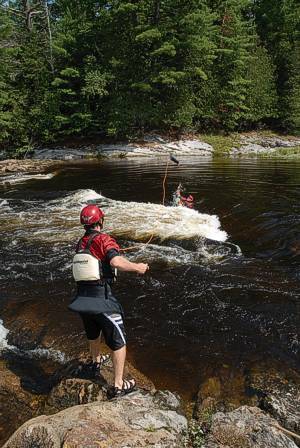 As the rescuer, your first priority is to make sure you're in a secure position, ready to handle the load of a swimmer grabbing onto their rope. In the best-case scenario, you've taken the time to set up safety by positioning someone with a throw line in a good spot downstream. In other cases, you may have to act quickly by running down the bank or even throwing from a boat. On the bank, the ideal placement has the rescuer within reasonable reach of the swimmer above a relatively safe landing zone to pull him or her into (an eddy or slower water near the shore). Be sure that your footing is solid, both for the toss and the pursuant rescue. It's best to use a rock or something else to help brace you. Another technique is to crouch or sit down, brace your feet, and use a hip belay, which is achieved by bending the rope around your waist to add friction. Notice that we said bend.

It's important never to wrap the rope right around any part of your body-the forces are strong! Lastly, consider the angle at which the rope will be pulling on the swimmer. The idea is to throw the bag out to him or her so it pendulums them back in toward you. Once the swimmer is directly downstream of you, the rope will be serving no use but to hold them stationary. In some cases, it you may need to move further in from the bank as he or she gets closer to shore to maintain the pendulum angle.

There are several different ways to throw the rope, and the decision is based on your personal preference for a given situation. In general, an overhand or sidearm toss is usually best for longer distances, while an underhand throw can be effective for quick, short rescues. Regardless of which type, to become proficient with a throw line you need to practice. With its odd shape and the drag of the uncoiling rope, it's much different from throwing a ball. On top of this, you often have only one shot-so accuracy is crucial, and anticipating the river's flow makes aiming more difficult. For this reason it's best that at least some of your practice be on a river, where hitting the target is more challenging and realistic.

The first thing to do is alert the victim to your location and to the fact that you are throwing him a rope. You can do this by shouting or using your whistle. With regards to the toss, start by pulling out an arm-length or two of rope to give you the freedom to wind up. Hold the free end in one hand and the bag in your tossing hand. Ideally, you want the bag to land right in front of the victim. With that said, it's also good to keep in mind that it's better to throw the bag too far and slightly upstream of the victim than too short and downstream. The reason is that with more line out and the bag just upstream of him, the victim still has a chance to swim to the rope before it starts to pendulum into shore. Once the victim has the rope, quickly brace yourself for the tug and get rid of any slack (if you have time).

If you're the victim, you can make the rescue go much easier. When you are swimming, be alert and look around for the rescuer. When the rope lands, try as hard as you can to get to it, because it might be your only chance for rescue before being washed downstream. Grab the line, not the bag, as the bag may have forty more feet of cord in it! Once you have the rope, hold on tightly with both hands and get ready for a very strong pull. Roll onto your back (in the defensive swimming position) and place the rope over your outside shoulder (the one furthest from shore). In this position, it's easier to keep your head above the surface, and with the rope over your outside shoulder you're maximizing the pendulum effect.

This article is an excerpt from Ken Whiting's recently revised book,
'The Ultimate Guide to Whitewater Kayaking - 2nd Edition' 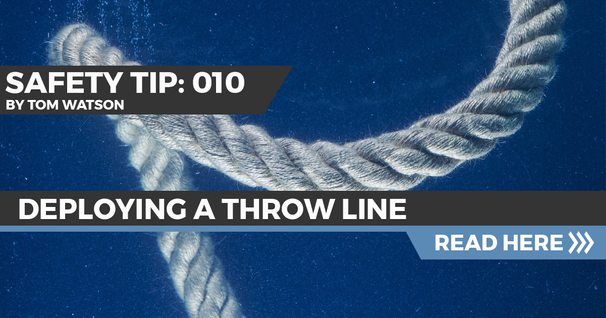 Casting out a rescue throw line, either contained within a Throw Bag or gathered in coils requires… 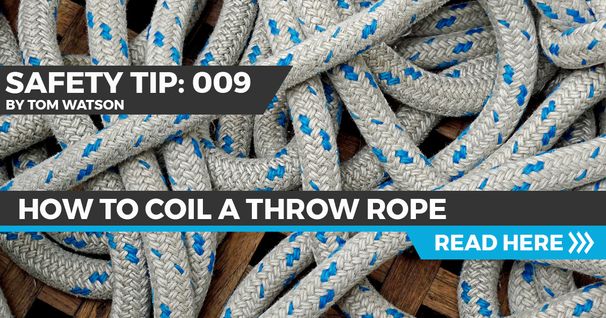 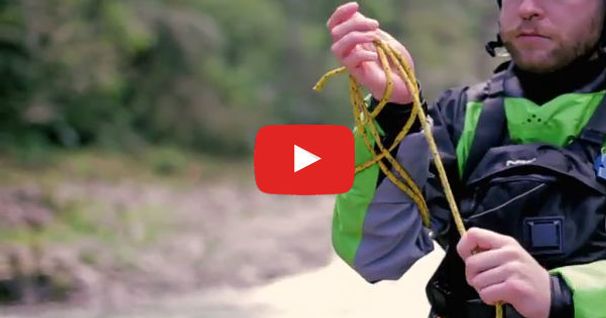 How to Quickly Coil a Throw Rope

Running white water contains inherent risks, and every boater should learn to practice proper safety and…