Tips For Getting Through Waves

Don't underestimate the power of waves, no matter the size. Here are a few tips to help you navigate waves safely and efficiently!

Here’s a couple of basic tips for getting through waves.

First off, I'd like to say a huge thank you for all the feedback I received in the last video on stability and hull design. I received so much great input, and I'm going to be looking to share as much as possible in the coming videos.

The reason for this topic is that in the last video discussing stability, I was showing the kayak being sideways to a wave. Several people commented “well, wouldn't you want to be facing the wave instead of being sideways to the wave?” and while that is true – that's actually the first tip for this one – that doesn't mean you won't find yourself at some point in different positions and orientations that you want to the wave. Trust me, there's been times that I’ve been upside down, sideways, backwards, being slammed against the ground… Sometimes, despite your best ability, the wave will decide for you. If your plan is to only deal with waves when you're launching and landing, there's still a chance you might end up in a different position that you're not expecting on the wave.

Let's get into the tips. The first one, as I mentioned before, orientation. Usually, the best position to be in versus the wave is staring right at it. Your kayak as it is will want to get through it if it's pointing directly at the wave. The same way the water parts as you paddle through. Don’t get me wrong, there's lots of situations where the waves are going to behave very differently – it might pick you up and slam you without you even trying. But lengthwise you just have a lot more stability than side-to-side. Also, facing the wave means you can keep an eye on it the entire time, you know exactly where it is, and lastly, you can power into the wave.

A fun thing to do as kids is if you're in the ocean and waves are coming at you, waiting for the right time and then diving right under it as it passes. The idea is, if you have enough momentum, you punch right into the face of the wave and you end up on the other side. It can be a similar thing if you're trying to punch through or over a wave with your kayak.

This reminds me of my time years ago in Charleston for training. I went out with a group to the jetty in Charleston Harbor, and we were playing in the tiderace there. Nigel was our coach that day, and one of the exercises we were doing was going up and into the waves, then coming around and coming back with the waves – always trying to be in control. For a couple of us that were just getting used to being in those waves, as we did the exercise, Nigel was next to us and every time a wave came he would yell out “POWER!!!” similar to the way Jeremy Clarkson in Top Gear would do. The idea was to plant your blade in the water and as you saw that wave cresting, to make sure you got through.

Tied into that, the next tip is to be wary of where your paddle shaft is. Make sure you're not holding it right in front of your face because if the wave crashes and slams into you, that shaft will slam right into your face. Keep that shaft to the side a little bit, just away from your face.

Another little tip, this is something I really like doing, if I get the timing right I like trying to make it so that the wave comes right past my feet and then I plant my blade on the other side of the wave – on the back face of the wave – and then I power through. That has helped me a lot of times with bigger waves, because as they slam into me, my paddle is already past the wave and is pulling me through the wave. So even though the wave might have a lot of power, I am pulling myself right through it rather than just hoping I had enough momentum to get through.

Another thing you could do is if a wave is really going to slam into you, try to present less surface area to the wave. A lot of people like ducking a bit as you're doing this so that the wave doesn't slam into your body and push you backwards – it should allow you to punch through a bit easier depending on the type of wave it is.

The last tip, which is my favorite, is a little bit more advanced. You need to be comfortable with your roll and you need to be comfortable in waves. The idea is, as I mentioned before, as kids it's always really fun to try to dive under the wave as the wave face appears. If you go under, the wave goes right over you. So it’s the same here. As the wave approaches, as long as it's deep enough under you, capsize, let the wave go past you and then roll back up. I know that Cate & Jeff out in Mendocino have a really great blog post worth checking out (https://womanonwater.blogspot.com/2018/01/paddle-out-techniques.html) they have a couple of different ways of punching out in waves and I highly recommend reading up on because they also have very different conditions that we do here in New York. But this technique they call a “turtle dive,” and it's just a lot of fun to do. I think it's also really good for becoming more confident with waves.

I mentioned in a previous video about managing fear when sea kayaking that this is one of the things I like to do. I try to go to a setting and then just practice for a while in an area so I can feel more confident. When I was in Oregon for Lumpy Waters years ago, we were playing in an area that had bigger waves that I know I could have handled, but instead I chose to play in slightly smaller waves. In these smaller waves I worked on presenting my side to the wave, facing the wave, being backwards to the wave, etc. I was getting tossed around, and I was doing these rolls as waves came just to feel more confident.

Recently, when I was in Maine I took a swim when we were playing in current. Looking back on that, I know it was because I didn't feel confident enough or comfortable in the setting. If I had just taken the time and tried a bunch of rolls before doing the exercises, I know I would have done better. We were there for three days. The first day I kept thinking “oh man, if I miss this wave, I don't know what's waiting for me behind me.” By the third day, I felt a lot more comfortable and more confident. However, when playing in the current I didn't take the time to feel more comfortable – I wish I had tried doing a couple of these moves since it always helps me feel more comfortable in different paddling situations.

To wrap up, please do not underestimate waves. The sea always wins. Still, it's great to work on skills, learn how to handle waves, and do the best you can in them. Please, if you can, always work with paddlers that know what they're doing. Friends, coaches, just don't go out alone especially in the beginning. Go with someone that can help you out, that can give you tips on the spot. Maybe consider taking some surf classes, rough water classes, and the same thing goes for conditions. Can you handle what's in front of you? Have you been watching sets? Do you understand where waves are breaking? It is very easy to get hurt in waves, even small ones – they pack a lot of power.

If there's anything you'd like to add, or you have any stories you want to share, or any other tips that you like to do while you're playing in waves please comment below. I hope this video was helpful, subscribe if you'd like I always try to put these videos out. As always, Luke Rovner for Kayak Hipster, thank you for watching and see you next time. 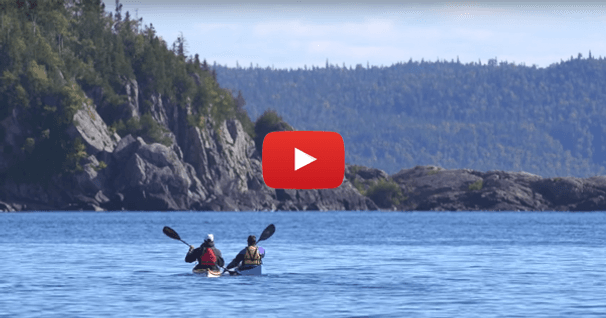