The following is an excerpt from World Champion, Ken Whiting's new book, "Rolling a Kayak"

Teaching the kayak roll is an exercise in patience and communication. For many instructors, it is the most enjoyable kayak skill to teach for the challenges involved, and for the feeling of satisfaction that comes from successfully helping a paddler learn to roll. 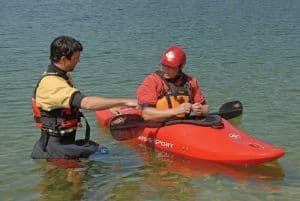 Before looking at some of the ways to teach the roll, it's important that I preface this section by making it clear that the techniques presented here come from my years spent teaching the roll, and working and learning from other instructors. Although they are time-tested and proven methods, they certainly don't represent the only way to teach the kayak roll.

One of the most important things to do as an instructor is to keep in perspective how difficult and emotionally taxing things-which may seem simple to an experienced paddler-can be for new paddlers. Fear and frustration can be powerful hindrances to learning. For these reasons, it should be a priority to develop and support the beginner paddler's comfort in being upside-down underwater-before they have an opportunity to flip unexpectedly and scare themselves-and it is why I recommend starting with the wet exit.

Every paddler has a different comfort level on the water. Some paddlers won't mind flipping and swimming on their own accord. For others, flipping upside-down will be a terrifying experience, even with you standing right beside them in the water. For more anxious paddlers, try the following progression. Start by standing in waist-deep water with the paddler facing you in their kayak. Ask the paddler to hug their deck while you flip them over and then immediately flip them back upright. As they gain confidence, you can ask them to slap the hull of their kayak when they want to be rolled up so they can safely experiment with being upside-down a little longer. It won't be long before they will have the confidence to try the wet exit with you holding onto their kayak, ready to roll them upright in case they suddenly feel like they "can't get out". After a few wet exits with you on hand, they'll be ready to flip over themselves and perform the wet exit with your more distant supervision. 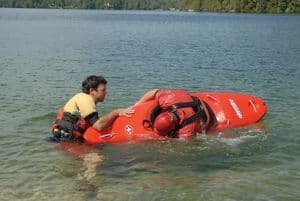 Once a paddler is comfortable with the idea of being underwater, you can start teaching the hip snap. Ask the paddler to first practice rocking their boat back and forth while keeping their upper body still and upright. This teaches them to stay loose at the hips, which allows their upper and lower bodies to work separately and cooperatively with each other. Next, ask the paddler to practice their hip snap while on their side and holding something stable, such as the side of a pool, a low dock, or the bow of a friend's boat. Once they have developed a full hip snap and learned to keep the head down throughout, try a few T-rescues. When a T-rescue can be performed competently on both sides, a paddler is ready to learn to roll.

As with teaching any skill, remember that different people learn in different ways, and no one way is better than another. On one end of the spectrum you have people who learn visually and through action. No matter how effectively you break down the technique verbally, this type of person really needs to see it and/or attempt it to fully understand it. On the other end of the spectrum you have people who learn in a very technical fashion and who need to be given clear verbal breakdown of the method with obvious landmarks. Most people fall somewhere in between these two ends and will need the roll to be both demonstrated and broken down in a clear and simple manner. This is not only important when introducing the roll, but it is equally important when working with a paddler one-on-one, while standing in the water. As clearly as you may be verbally communicating what you would like them to do, you may have to hop into your kayak and demonstrate it.

With regards to which roll is the best to teach a learning paddler, there is no correct answer. As I mentioned earlier, some instructors will very successfully teach the Pawlata roll first. The Pawlata is much more common among sea kayakers and much less so among whitewater kayakers because the latter need to be ready to go immediately after rolling up, making it preferable to not move the hands around on the paddle. I prefer to teach a standard C-to-C or sweep roll because it promotes good rolling technique from the very beginning and it helps to develop paddle dexterity.

Whichever roll you decide to teach, don't give the paddler any options early on. The simpler you can keep it, the better chance they have at rolling successfully. If after working on a particular type of roll for a while, you decide that it would be best to try a different style, no problem. In the interests of being attentive and flexible, feel free to adapt your teaching technique as necessary, but understand that you want to limit how often you switch techniques.

Here are pictures in movie form to help you see what is being explained:

I have always found the most successful teaching progression starts with me standing in the water with the paddler. I ask them to focus on setting up with their paddle high out of the water, and their head and body leaning far out to the side. I ask them beforehand to let me guide their paddle, while they focus their attention on making a complete and powerful hip snap and keeping their head down. By repeating these motions, the paddler learns how their paddle should move through its set-up and catch phase. Once they are setting their paddle up nice and high out of the water, hip snapping effectively, and keeping their head down throughout the roll, they are ready to start taking more control of their own paddle. At this point I stand right behind their body while they are still upright. While supporting them either under their arm or by grabbing hold of their PFD, I have them slowly fall towards me. They can now completely right their kayak while I keep their head just above water. If required, I talk them through the paddle motion and even use one of my hands to help guide them. The key, as mentioned earlier, is to support the paddler not the blade, so that they do not have to put too much pressure on their paddle.

These assisted rolling practice drills will develop good technique over time. Some paddlers will catch on right away, while other paddlers may need a number of sessions before it clicks. Just stay patient, attentive, flexible, and positive. Another thing to keep in mind is that rolling uses muscles in ways that a learning paddler isn't used to. This fact, combined with the mental challenges of picking up a new skill, mean that there is a point at which "learning fatigue" will set in, so don't expect to spend more than an hour or two teaching to roll on any given day. By going longer than this, I can guarantee you that the learning curve will quickly plateau, or even reverse. 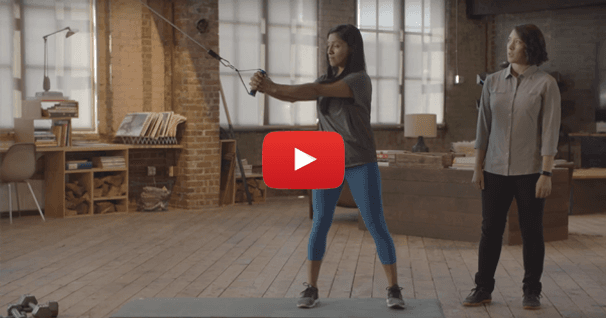