Watermelon has always been considered the emblematic summer fruit thanks to its high percentage of water, its delicate sweet flavor and its somewhat crunchy texture. But the intense reddish-pink tint of its flesh also shows excellent health virtues while, at the same time, interesting traveling and culinary potential for the gourmand paddler.

Watermelon contains as much as 90% water. In central Africa, where it was first discovered, the custom of serving a few pieces of this delicious fruit as a thirst quencher to any traveler has been established for centuries. It also played a very important role in ancient Egypt, where water was (and still is) in short supply, so much so that pharaohs were often buried with a few watermelons to ensure they would not get thirsty during their trip to the outer world. Nowadays, throughout the world, watermelon has its aficionados who enjoy different ways of preparing it. In China, for instance, it is very popular served as a deep fried appetizer, while in many countries of the Mediterranean Basin (Greece, Turkey) it is often prepared with lime or lemon juice, a dash of olive oil and offered to guests with a slice of sheep cheese and some walnuts. In Central America, the rind is eaten either pickled or candied. In India, the seeds are roasted with spices and eaten as a mid-afternoon treat or crushed to make bread. In Russia, many people still make a delicious traditional watermelon wine whereas in North America, watermelon is usually eaten as is for its delicious flesh or added to a fruit salad.

Depending on the varieties, watermelon flesh can be light pink, yellow, orange or even creamy white. But the reddish fuschia-like color remains the most popular, especially among North American growers, who produce about one third of the annual world crop. Watermelon is a member of the cucurbitacean family, which links it to cucumbers, cantaloupe or squash, which all grow on vines, on the ground. Their weight varies from one to 40 kilos, their color goes from very dark green to bicolor stripes and their shape from perfectly round to oblong like a football ball.

Not only is watermelon an excellent thirst-quencher; it also has the potential to reduce chronic inflammation which is suspected to cause illnesses such as asthma, diabetes, arthritis, coronary disease and certain cancers. This protective phenomenon is linked to a high content of antioxidant elements, whose main purpose is to travel throughout the body searching out free radicals to destroy them. Those free radicals are found mainly in the sun’s rays, the oxygen we breath and can also be caused by pollution. They are very destructive when they block blood vessel walls by sticking to them in great number or when they damage human cells, which leads to the development of different forms of cancers.

All plants have an extremely sophisticated antioxidant arsenal which protects them against these invaders. That’s why they all have bright colors. For each specific color, there is a cocktail of components that act as a protective shield. And the nice thing is that animals and human beings are also partially protected by the antioxydants found in the plants when they eat them.

Vitamin C, A, lycopene and beta-carotene

The first antioxydants that can be found in watermelon in abundance are Vitamin C and Vitamin A, the latter being produced through betacarotene. One cup of watermelon provides 25 % of our daily needs in Vitamin C, an anti-infectuous and anti-inflammatory agent which also protects teeth and bones, and 12 % of our daily requirement for Vitamin A. This vitamin is very effective at keeping blood vessel walls free of cholesterol deposits, a role that can only be well performed with the help of Vitamin C.

Carotenoids are another powerful antioxydant. Lycopene is one of those agents, and it protects both the heart and the prostate. One recent health study published in the Journal of Clinical Nutrition showed that foods rich in lycopene such as watermelon, papaya or tomato could reduce from as much as 84 % the risk of developing prostate cancer. The same study underlined the protective effect of that substance for colon, lung and womb. It is also considered to be very effective at reducing hypertension, along with the risk of developing other heart-related diseases. On the other hand, very low levels of lycopene in the blood are believed to increase by 230 % the risk of developing certain types of cancers. The dark pink watermelon is a good source of this precious lycopene.

This juicy and savory fruit contains betacarotene, another carotenoid, although in smaller quantities than is found in carrots. The watermelon beta-carotene transforms into Vitamin A in the blood and also protects against age-related macular degeneration. It is also rich in Vitamin B6 and B1, which help maintain our energetic capacity and to optimize body functions. It’s also a good source of magnesium and potassium.

A perfect traveler for paddlers

As you might imagine, watermelon is an excellent companion for kayakers, even on lengthy trips because its tough skin protects it against humidity that’s always part of any kayak trip. Once open, though, watermelon must be eaten within 24 hours if not put in refrigerator. That’s why it’s a good fruit to bring along for a party of four or more. You can also find smaller varieties. Excellent eaten as is, watermelon can be added to a wide variety of camp dishes and it will give them a sexy twist, along with a more than welcome nutritional bonus. Try it in your morning granola with unsweetened yogourt or as a snack in the afternoon with a handful of walnuts. Or make it part of a delicious and refreshing salad.

How to choose the best watermelon

A study published in the Journal of Food Chemistry by the USDA claims that the lycopene content of a watermelon increases by as much as 11% to 40% when it is left at room temperature rather than in the fridge, while the percentage of betacarotene jumped by 50% to 139%. With only 48 calories for each cup it is considered to be the most nutrient-dense food. For a very nutritious watermelon pick one that is heavy for its size, with a skin that’s not too shiny, with no spots. One end of the watermelon should have a yellowish-creamy tint, which is a good indication that the fruit ripened on the vine rather than during transport.

Slice the water melon into slices 2 inches thick. Than slice again to form pieces of 2 square inches. Remove a bit of each water melon flesh to form a small cavity into each cube. In a small bowl, mix the remaining ingredients together. Stuff each cavity with the tuna-mayonnaise mixture. Serve immediately. You can also replace the mayonnaise with some pesto, which travels easily for trips longer than 2 days.

Slice the watermelon in large slices, then cut them into triangles. On each triangle, sprinkle a bit of Feta cheese, then the lemon juice and some lemon zest. Add a few crushed walnuts and slices of dry sausage. Finish with a few drops of olive oil and a pinch of oregano. Serve immediately. 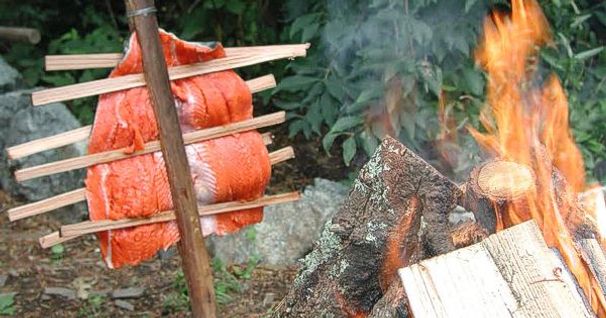 I may be dating myself here, but I still remember tasting feta cheese for the first time about 30 years…

For the Love of Lentils

Wait! If you think lentils are a poor man’s meal and too complicated to cook… it’s time you…

Salsa sauce is a great symbol of Mexicans’ taste for the good life and good food. Its history dates back…