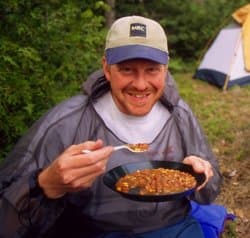 If you're car camping, or the portages on your interior canoe trip happen to be short (or better yet, nonexistent), then you definitely have the privilege of taking along a few luxury food items. After all, some dehydrated meals taste a little like munching on a cardboard box. So there's nothing better than to be able to pack fresh meat and vegetables, at least for the first few days of your trip. There's absolutely nothing like it. Imagine ending your day and dinning on a juicy steak, crisp salad, and chocolate ice cream for dessert.

Here are a few tips on keeping the fresh food fresh and the frozen food frozen. 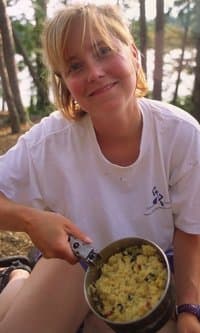 True camp coffee is nothing but real grounds-and-water-in-the-pot coffee. Bring water to a rolling boil, take it off the heat source, dump in one generous Tbs. of coffee grounds per cup of water, and let it steep (covered) alongside the campfire for approximately five to ten minutes. To settle the grounds, tap a spoon on the side of the pot 3 to 5 times.

The most crucial element of brewing "true grit" is to never let the coffee boil once you've taken it off the heat source. Old-timers used to say that boiled coffee tastes like rotten shoe leather, and they're right! The reason for the bad taste of boiled coffee is in the bitter tanic acid and flavouring oils it contains. The tasty oils are released at 205° F (86° C), just below boiling point. The bitter acids, however, are released right at or just above boiling point.

Another important factor is how to settle the grounds before serving the coffee. Some people throw pieces of egg shell or toss in a few round pebbles. I've even witnessed campers take hold of the wire handle on the pot, swing it with the speed of an aircraft propeller, and have complete faith in centrifugal force. This suicidal action will pull the grounds to the bottom of the pot - guaranteed. I merely tap the side of the pot with a knife or spoon and then make sure to offer the first and last cup of coffee to someone else in the group.

When I remove my poggies after a strenuous three hour kayaking session there’s nothing my hands, my…