I’m always torn between my two passions: as a foodie and as a paddler. But living in a northern clime with summers that are all too short, the kayaker in me clearly wins out whenever that lazy, hazy, crazy season rolls around. I virtually clear out of the kitchen and let my carnivore of a husband take over the cooking duties on the grill.

But another equinox is fast approaching, and the leaves in my neck of the woods are already taking on their first tinges of color. So last Saturday, I pulled on a fleece and visited our local farmers market.

I was again amazed by the colors and varieties of fruits and vegetables available at this time of year. Nature’s bounty at its best, and since it all comes from local producers, at its freshest as well. Garden-fresh produce like eggplants, bell peppers and summer squash or zucchini are now available all year long, but right now, they are among the vegetables that are readily available at the farmers market, along with tomatoes. And since I’m always preaching about using the freshest local products, my mind raced about how I could incorporate these summer vegetables into this paddling column. We can talk root vegetables again later, but right now, these products are in abundance.

These vegetables are great to eat, but they are also real health foods. The eggplant, for instance, is not only rich in vitamins, dietary fibers and minerals, it also contains powerful antioxidants. One phytonutrient found in the eggplant’s skin is nasunin, a potent antioxidant that has been proven to protect cell membranes from damage. U-S Agricultural Service researchers have found it contains chlorogenic acid, one of the most potent free radical scavengers found in plant tissues. Eggplants can help protect against cancers, bad cholesterol and viral activities. With this illustrious track record I still have to convince my husband to accept and, eventually, enjoy its somewhat spongy texture and pleasant slightly bitter taste.

The bell pepper too, whatever its color, has powerful antioxidants that help destroy free radicals that travel through your body, causing huge amounts of damage to cells. Bell peppers also provide fibers that can help lower high cholesterol levels, another risk factor for heart attack and stroke. And red peppers contain lycopene, just like tomatoes. Recent studies suggest that individuals whose diets are low in lycopene are at greater risk for developing prostate cancer and cancers of the cervix, bladder and pancreas.

Even the humble zucchini contains phytonutrients and can be considered a disease fighting food. It is an excellent source of manganese and vitamin C and a good source of magnesium, vitamin A, fibers, potassium riboflavin and phosphorous.

But all this talk about the health benefits of these late summer vegetables shouldn’t detract from the fact that they are also simply delicious and so easy to cook. Both bell peppers and squashes originated in South and Central America, but they quickly carried throughout the world by Spanish and Portuguese explorers. And while the eggplant was first cultivated in China, it, too, soon made its way to Europe and the New World. The Italians, the Greeks, the French and people from the Middle East have all incorporated these vegetables into their best regional recipes. Considere classic dishes such as Italian caponata or stuffed zuchini, French ratatouille, greek fried zucchini, Lebanese baba ganouj, and you will realize that they are stars among the stars in these parts of the world. That could be one of the reasons why the Mediterranean diet is perceived as being so healthy.

As for paddlers, there are many interesting and easy ways to enjoy eggplants, bell peppers and zucchini on the go. A piece of aluminum foil and a bit of olive oil is all you need to create fabulous parcels that will cook in no time on the grill. They cook very quickly, which is convenient, even if they are a little fragile for transporting. While eggplants bruise easily and should be kept in a non collapsible container, summer squash and bell peppers will last easily three days. They will also make fabulous dishes for a picnic.

Cut 2 large pieces of aluminium foil. Cut the zucchini into 1 / 2 in. slices. Cut the bell peppers into medium size cubes. Cut the onion lengthwise into 8 wedges. Crush the garlic cloves and then cut into very small pieces. Pour one quarter of the olive oil on each aluminum foil and spread the oil evenly on the foil with a paper towel or your fingers. Place the vegetables equally in the center of each foil. Drizzle the remaining oil, than sprinkle with the herbs, salt and pepper and fold into two hermetically closed packets. Put over the fire on a grill, turning frequently. Depending on the intensity of the heat, cook the vegetables for 20 to 30 minutes.

Cut the eggplant in two, lengthwise, and put its face side down on an oiled cookie sheet (or an oiled grill, over a camp fire that’s not too hot). Cook for about 30 minutes or until the flesh is very soft. Let cool, then scrape the content of the eggplant with a spoon and put in a bowl. Discard the skin. Mash the eggplant flesh with a fork. Add the remaining ingredients and mix well. Serve with pita wedges and crumbled Feta cheese. To make the Lebanese version (baba ghanouj), add 2 tbsp of sesame paste and 1 tsp of sumac to the mix. Add the pine nuts at the very last minute as a garnish.

This is a dish to make at home, in advance, and to bring during a one to two day(s) trip. Cut the vegetables into small cubes. Put all the ingredients in a large saucepan. Cover and simmer for about an hour, stirring occasionally, or until well cooked. Before serving, add a few olives on each dish. This is delicious hot or cold with croutons and dry sausage (like rosette de Lyon) or in a wrap with a bit of prosciutto (dry Italian ham) and bits of authentic parmegiano reggiano cheese.

With a large grater, grate the zucchini and the carrots and put them in a bowl. Add the scallions and the parsley. Set aside. In a small bowl put the vinegar, the sugar, the salt and pepper and the mustard and mix well with a small whisk or a fork. Add the olive oil slowly and continue to whisk until it is well emulsified. Pour on the vegetables, toss well and serve as a side dish or with a can of tuna and some fresh bread for a complete meal. 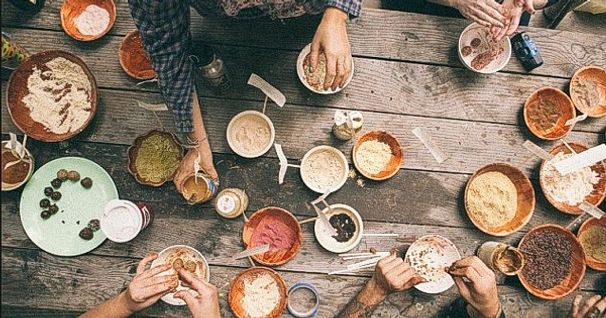 I will always remember when my friend Patrick, a seasoned paddler who thrives on organizing wonderful…

After 6 years of contributing to Paddling.net as a food columnist I think it is about time I tell you…

How to Plan a Multi-day Gourmet Paddling Trip (Part 2)

Last month, we looked at the easiest way to plan daily meals for a multi-day paddling expedition because…

When one considers that rice is a staple for three billion people around the world, it is no wonder the…