Nothing says Christmas more than rich, dark cakes loaded with candied fruit, nuts and spices that bring to mind an old Victorian tradition. Many fruitcake recipes are topped with a generous dose of alcohol such as brandy or rum.

But what's even more interesting is that a good fruitcake (especially a recipe that calls for soaking in alcohol) needs to age in order to develop more flavor and an interesting personality. This means that the batches you prepare now will be at their peak when paddling season resumes for most of us. So if you are one of those people wondering what present to bring along when you've been invited for a dinner during the holidays or to a New Year's Eve party, don't look any further than in your pantry; homemade fruitcake makes the perfect gift. It may require a bit of time to prepare but it is virtually impossible to miss.

Perfect gift to pack for a paddling expedition

If you make it a month in advance, it will have enough time to age nicely and to improve in fragrance and flavor and will be ready to eat, although it won't yet be at its best for Christmas.

Finally, another interesting point about fruitcakes is that there are many different types of recipes available to suit all tastes: spicy or sweet, dark or light batter, with or without candied fruit, with or without spirits, with a single variety of nuts or a mix (Brazil nuts, walnuts, hazelnuts, almonds,) etc.

Add history and an international touch to your recipe

One thing you may want to do in order to make your present feel even more like a special gift is to write a note about the history of fruitcake on a decorated cardboard laced with a ribbon. That history is impressive since almost every country has its own traditions and recipes. The Italians cherish their panettone, sweet bread that's filled with candied fruit, with some newer versions adding chunks of chocolate. The Germans bake the traditional stolen, a loaf-shaped cake that also contains dried fruit and is dusted with icing sugar. The Dutch version is called kerststol. The Scottish love their Whisky Dundee, a traditional Christmas cake generously soaked in…Scotch whisky! It contains only Sultana raisins, cherries and almonds.

From Ancient Egypt to the USA

The first known version of fruitcake comes from Ancient Egypt, where it was left in the tomb of a wealthy person as a departure gift to the afterlife; the more the cake was laden with dates, raisins and almonds, the richer the deceased. In Rome fruitcake called for pomegranate seeds and pine nuts, mixed with barley.

The name fruitcake was adopted in the Middle Ages, when bakers added dried fruit, spices and honey to the batter. Spices were a recent legacy from the Middle East and consisted of cinnamon, clove, nutmeg and ginger. At the time this cake was seen as a very special gift in winter time because fruit were so hard to find during the cold months. In the 16th century, sugar from the American colonies made preserved fruit very popular; so much so that too many candied fruit were being produced, and fruitcake was an easy way to use those surpluses.

Nuts were added to the mixture to bring good luck for the next year's harvest. In Victorian England fruitcake became a huge success at tea time, and not only during the Holiday season. It also became popular across America, although it declined in the 1950s and 60s when poor quality industrial-type fruitcakes flooded the market during the Christmas season. But nowadays, fruitcake is back in favor in many households where it is still a family tradition that is passed from one generation to another. And you can give your creativity free rein when you take time to bake the cake yourself.

A few secrets to master the art of the fruitcake

Any professional baker will tell you that the secret to a good fruitcake is first soaking the fruit in alcohol and then adding more alcohol to the cake itself while it ages wrapped in a cheese cloth, enclosed in a metal box. This will add moisture and a deeper, more complex flavor. Just make sure you also prepare a kid-friendly version!

There are different qualities of candied fruit and nuts, so chose the best. Fruitcake should be aged at least a month (and up to four months) in a cool, dry place, which makes the timing perfect for the start of the next paddling season in spring (at least in the Northern Hemisphere!)… You can create the mix of fruit, citrus rinds and nuts you want, including dates, figs, dried pineapple, papayas, mangoes, apricots, lemon or orange rinds, dried cranberries, cherries or blueberries in the amounts you want as long as you respect a simple rule of thumb: the weight of the fruit and nuts must be approximately the same as in the original recipe.

Another important thing to remember is to dredge the fruit and nuts in flour so they won't sink in the batter. Merry Christmas and happy fruitcake!

* Since I really don't like currants or maraschino cherries, I created a recipe where they do not star. But you can replace any dried fruit you wish in this recipe with them. 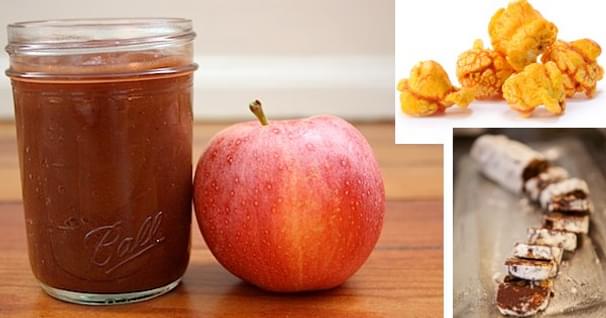 This Christmas, as always, you're hoping to see big smiles appear on the faces of your loved ones when…

Mint: How to fully enjoy the most spring like herb

It’s springtime, and gardeners have either already begun or are anxiously waiting to plant their herb…

Halloween may be over, but before you throw away the pumpkins that adorned your doorstep this fall,…