I've been asked a lot of questions on a video I've done a while ago that was on the basics of kayak surfing. And the thing is, near where I live, condition is usually not that great for surfing. We need to travel in order to try to find some good conditions. So, I had the chance to go down to Mexico and paddle with my good friend, Daniel, and he does quite a bit of surfing. As well as I went through all my old footage of me learning to surf, I think that's helpful too. Because I have a couple of big mistakes I've made and some of the consequences that happened. And I think that will be good to show as well.

So, first of all, this is gonna be a very basic overview. Please do not consider it a lesson. This is more of just understanding what to look for when you either go take a lesson or when you work with someone experienced. Please do this with someone experienced. Wear the right gear, wear a helmet, wear a PFD. Surfing can be very dangerous depending on where you're doing it. Just be safe out there.

So, first off, where are you gonna be on the wave? A lot of times people think that if this is the wave, what they want to do is slide down the wave and then ride all the way out in front over here. The problem with doing that is that as you're going down into the wave, look what happens. You lock your bow, you lock your stern in the water, and then all of a sudden the wave does whatever it wants with you. So, what you want to do is be in a position where you can be in control of the kayak and the movement, and not have the wave dictate where you're going. What you wanna do is stay closer to the top of the wave so that, at that point, you're able to control the kayak however you want.

Now, a lot of kayaks have come out that are either much shorter, like playboats, that you can use where that doesn't apply. You can pretty much be anywhere on the wave. Or, there's lots of other kayaks to have lots of rocker so that when you are on that face of the wave, you can still have control. But for the average sea kayak, that's usually long, has a bit of rocker, but still it doesn't want to be down in the front of the wave. It wants to ride a little bit further back. And the way you wanna achieve that, and being in a spot that you're comfortable, is by controlling your speed relative to the wave.

Here's another example of me taking a surf lesson a couple of years ago. And you see me paddling, paddling, trying to catch this particular swell. And what I do is I lean forward and take lots of strokes. And then I wind up leaning forward, back, forward, back a little bit so I can control where I'm sitting on that wave the entire time. And eventually, I let it pass me. It's essential when you're playing with waves to keep a strong paddle response in front of you. Don't get your elbows behind your body. Don't raise your elbows above your shoulders. Don't leave your shoulders open for injuries. And as you work from side to side, turn your entire body.

So, in terms of what your paddle is gonna be doing, you're probably gonna be doing a combination of bracing, so using your paddle to stay upright as well, as some type of stern rudder. A stern rudder it's a great maneuver to learn from someone that really knows what they're doing. But, essentially, what it is, is taking your blade, using it as a rudder, and then you stern on either side of the kayak, so you can control your movement on your turning without losing momentum.

Now, the most important lesson I learned the hard way during the class is using those chines, using edging from side to side to control your kayak on the wave so that you're carving your way down the wave rather than just going down it. So here's a perfect example of that. We were playing in tiny waves of probably one to two-footers right by the coast. And I'm paddling here trying to catch this wave. I should be rotating a little bit more. But now the wave decided to turn my kayak...it's also called broaching, to turn it to the left. I'm getting ready to brace into the wave, but I'm not using absolutely any edging. So can you guess what happens next? The wave crashes on top of me on the left, takes me for a ride, window shades me off the beach.

So, that's a perfect example of why you need to wear a helmet. Here my head definitely hit the sand a couple of times as I rolled around. But what I love about this clip is I was taking this class with Dale Williams, who I absolutely recommend as a superb instructor. And as I watched the footage later, I noticed something that was excellent. Dale noticed my capsize and my window shading off the beach. So he wanted to come in and check on me, and then just to give me pointers on how not to do that again. I get my kayak out of the way. The camera is still rolling, and I'm gonna point out. Dale is in the background on the left, and he's gonna be riding that little wave all the way to me. And I was delighted when I realized I caught this on film. Here let's watch this.

He's carving on one side, carves on the other. And look at how much he's throwing his wave around. And now that's just inches of water and he still manages to carve and turn the kayak around completely. But still, let's see that again. Let's go back to when he realizes what happened to me. He's gonna catch a tiny wave...so it doesn't matter the size of the wave. His technique is the same: carving to the right like crazy. You can see the whole of the kayak both times carving to the left, and then he carves to the right again. It's just beautiful how he's able to turn the kayak on a dime in that little bit of water.

So, this a little while later. I'm trying to do what Dale told me to do and really try to edge. I am not rotating my torso. And also, that's something that needed to improve. This was a couple of years ago. But this is why it's great also to film yourself because you think you're doing something well, and then it turns out you weren't. But in any case, I throw my weight into the left side. I'm using those chines in my kayak. And I'm able to really control the carving on the wave from side to side. That's a lot better than before.

And look, I lean way into that wave with a brace in order to let the wave when I want to go by and not have the wave through whatever it wants of me. And by leaning forward and back, I'm also controlling that speed. So now let's look at all of that together in a couple of the clips that I shot with the drone of Daniel because he makes it look very seamless in how he catches his waves.

Here he's gonna take a couple of strokes. And then once he feels he's starting to get some speed into the wave, he's gonna throw that edge in, he's rotating his torso, he's keeping that box in front of him, and he's keeping his paddle in the mix of a stern rudder or a bit of bracing, depending on what he feels he needs at that moment. At that point, he sees that he is a little bit too far down. And at this moment you can actually notice. Look at this moment. His bow and his stern are completely locked because he's all the way on the bottom of the wave. So what does he do? He slows down a bit, he gets up on the wave again, and then Dan gives him the ability to try to do something else. Let's go to this other clip.

This one's a little bit foamy, but you can still see the same thing. He takes a couple of big strokes, and then speeds along. And at the moment he can, he throws that edge. Same thing here, he takes like a couple of big strokes, puts that right edge, uses his paddle as either a stern rudder or a little bit of bracing. And then he's able to turn and let the wave go by him.

The last bit of information I'm gonna leave you with is that always try to lean into the wave, always edge into the wave. If you find yourself sideways on the wave, plant your paddle in the wave, use it as a brace just like in that other clip when the wave hit me from the side and did whatever it wanted with me. If I had really edged into it, the wave would have passed by me, or at least would have moved me down, but I would not have capsized and then rolled around with wave.

So, I hope that was helpful. This is just a very light overview to what to expect when it comes to surfing. Do not use this as a lesson and go surfing. Please, work with people that know what they're doing. Surfing can be dangerous. You really can get hurt. I've been working on this for years, and I feel like I'm just getting started. But when you catch a wave, and you feel like it's a free ride, it's just such a wonderful feeling. And it doesn't matter the size of the wave. I've ridden one- footers, and I just had a smile from the start to the end of that wave.

So, if you have any questions or you wanna follow up on this topic at all, leave me a comment below. Please subscribe if you want to see more of these videos. I'm always trying to put them out. And it's always Luke Rovner, for Kayak Hipster. Thank you for watching. See you next time. 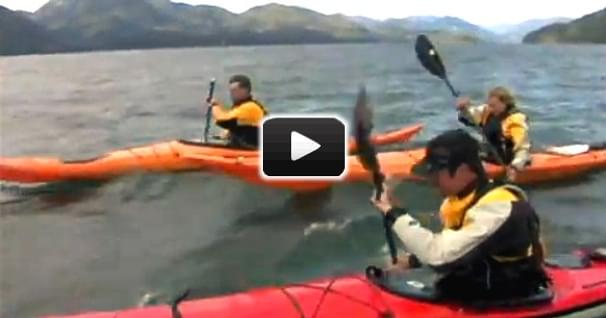 When sea kayakers talk about conditions, they'll usually have wind in mind because no other element… I got the chance to play in some rough conditions out on Long Island near Democrat Point (NY), along…