Sometimes we eat to fuel up; sometimes we eat to warm up. And then there are times we eat just because it makes us feel good. Whatever the motivation, a hot meal can really hit the spot, especially if your dining room is the cockpit of a kayak or while lounging alongside a campfire. While some might be content to ward off hunger pangs with a high-energy food bar, others might opt for a serving of chicken with pasta and tomato sauce – stove top hot and ready to eat in ten minutes! Sounds yummy.

There are several nutritional factors to consider when choosing a particular brand. One way to measure the value of a meal is to check the number of calories per serving. Here's a very general comparison of entrees taken from several leading brands:

- The recommended daily sodium intake for an average adult is about 2,300 mg. (about a teaspoon). Compiled from "Food Product Information" sheet provided by REI. - The U.S. Dept of Health and Human Services, Dietary Guidelines for Americans states a suggested daily calorie intake for a "moderately active", 19-30 yr. Male 2,600 to 2,800. The suggested intake for a Female is 2,000-2,300.

Here's a look at the range of an assortment of "ready-to-eat/self-heating" meals on the market today. 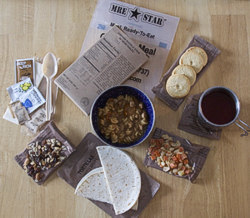 Historically, in times of conflict, "C-Rations" were the common form of field sustenance – in an environment where it was hard to get and keep fresh foods. Also, smoke and the light of cooking fires meant revealing oneself to the enemy. Later, improved versions ultimately led to government issued MRE's – Meals Ready to Eat. The foods offered were either pre-cooked or dehydrated: from chipped beef or chicken, to side items such as wafers and granola mixes to a packet of candy (M&Ms seem to be the candy of choice in military MREs.). Couple the food with utensils, salt/pepper packets and a tiny napkin and one had a full setting for meal that could be eaten cold from the packet, or via warming over a heat source. If for some reason you decided not to consume all of your MRE, not to worry, they have a shelf life of years!

I have an MRE packet I was issued in Fairbanks in 1977! Yup, over thirty years ago – and I still have it. I had resisted opening it for years prior to writing this particular article. I gave in and inspected the contents. "Corn Beef Hash" in an airtight, foil pouch, on a shelf for over 30 years! Hard to imagine being hungry enough to try that. I haven't yet. Yea, that's right – food wuss. I did try the sealed wafer. It was bland, flakey and... dry. I don't think that even right after it was cooked that it tasted any better. It was at least still edible after all those years!

A typical MRE usually offers the consumer about 1200-1400 calories. For military purposes they are meant to be consumed as part of diet totally 2800 to 3600 calories! Lots of energy for soldiers in war zones.

Today's MRE comes with a chemical heat generating pouch that is activated by adding a small amount of ordinary tap water to a plastic cooking envelop. Since the food is already cooked, these meals are simply heated to approach stove-top temperatures of yumminess. I looked at two popular brands:

MRE STAR: I tried to compare chicken dinners with other chicken dinners of the same type (pasta vs. pasta). MRE STAR is a full meal packet that has flavors comparable to all the others I tried. I never found one to rave about but never found any I couldn’t live on satisfyingly for several days, either. MRE STAR offers the typical varieties of beef/chicken/pasta/veggie entries. Supplemental food includes a drink powder mix, wafer/cracker; peanut butter, granola and a snack complement. The utensil packet is similar to all: plastic spoon, fork, salt/pepper/seasoning packets, sugar/coffee/creamer and napkin. Average cost = $6.50/based on a case of 12.

EVERSAFE: Another leading supplier to the military, these meals also passed the “eat again” test. Whether my piece of chicken is a cube or a free-form chunk, I want it to look and taste like chicken. Like the MRE Star, EVERSAFE meals are all high in sodium, too, some up to 60% of recommended levels in just one meal. That being said, none of these were too salty to the taste – or overly flavorful or spicy at all. Tomato sauces had a touch of tomato tang, but white gravies in chicken dishes were pretty bland for my taste buds. That said, just bring along your camping spice kit (you do have one, don’t you?) and doctor it up to your levels of tastiness. Average Cost: +/- $5.50; in case lots.

One big difference between the MRE's of old and the other "quick meals" of today seems to be that MRE's are considered complete, full calorie meals whereas the heat-and-serve pouch meals are convenient and fast but rarely have that much caloric value, some offering few calories but at 3-4 times the cost.

Neither of these MRE's includes a water packet for activating the heating packet. A positive note on that is that since the water does not come in contact with the food, you can use water right out of the river or lake.

By my interpretation, these truly are self-heating quick meals! The entrée (which is already completely cooked) is sealed in a small plastic dish which is more firm that the foil packets of the MRE and hence easier to handle/eat right from the carton. Also, these kits come with the exact amount of water you will need to activate the heater packet. The water is nicely packaged in a pouch- ready to pour. Tastiness was a step up towards “flavorful” but still could have been kicked up a notch – or three! 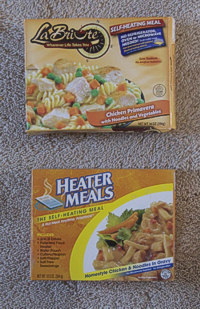 These meals were the most flavorful – and the least "quick"! I compared chicken entrees for my taste testing and found each one slightly unique and all more tasty than all the previous meals. That's not totally surprising since these were also the most sodium laden of the group. The tastiness came partially from the salt that I think might have enhanced other seasonings used for a particular entrée.

All the meals in this group required water from an outside source, a stove or fire for boiling and in some cases additional containers to cook or simmer the packet’s contents (most could be prepared in their own package).

In general, most of these I sampled were double servings. Combining two packets into a two-course entrée is a plus these meals have in common with each other. 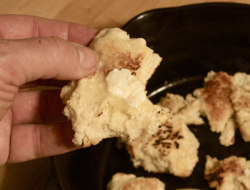 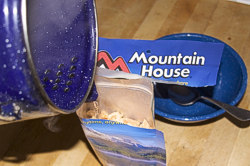 There are a few minor variances in the taste among similar entrees by different brands. A prudent shopper would be wiser to consider personal nutritional needs such as carbs or proteins, and certainly the amount of sodium you should be consuming. As far as prep goes, clearly the quickest/easiest ones are those with the required water already included (Heater Meals/LaBriute). The most flavorful are those that require some "cooking" time in pots (Cache Lake) and the most diverse are those that offer supplemental foodstuff and snacks (MRE Star/Eversafe).

With the exception of the Mexican entrees, all brands could use some help from a personal herb/seasoning kit.

Quick perk, serious refueling or simply the novelty of having a hot meal without ever leaving your boat, these "quick" meals help take the edge off of hunger. Bon appetite, matey!

With the summer season ready to glow, I've been busy lately rearranging my cooking essentials: the…

"All day I've faced a barren waste without the taste of water, cool water.Old Dan and I with throats…

Fresh Herbs: leaving the ordinary behind

Growing up in a big multiethnic city I often shared meals with the family of one of my best friends,…