In our culture, apples are considered the quintessential autumn fruit. So much so that we tend to forget that pears are also one of the season's important gifts. Even if they are now available 12 months a year, they are at their best in November and can change any meal from so-so to extraordinary in no time.

Pears may not be the toughest travellers, but with a bit of care, they can be used in a wide variety of simple dishes, at least within the first two day of any paddling trip. They make delicious appetizers and can be integrated to many savoury dishes, not only desserts.

When history reveals the pears' secrets

In Homer’s Odyssey, the pear was said to be one of the most precious gifts offered to humans by the gods. Well known since the earliest civilizations, their trace has been found on prehistoric drawings in grottos located in Switzerland. Asian pears and European pears belong to two different major families, one originating in China and the other one in northern Europe. The Asian variety produces firm and crisp fruits with a round shape similar to an apple. They ripen on the tree, whereas European pears must be picked before ripeness and left for two or three days at room temperature. Their flesh is very tender, slightly granular and fragrant. The texture, skin color and aroma vary considerably from one type to another.

Although there are as many as 3000 varieties of pears cultivated around the world, there are about a dozen varieties in North America. Everyone knows the green and the red Bartlett, the Anjou and the Bosc, the Bartlett being the most popular throughout the world. Other well-known varieties include the Comice, the Concord, the Seckel and the Starkrimson. The Bartlett has a bell shape, is bright yellow, very sweet and soft once ripe. The Anjou is rather egg shaped, is very aromatic and slightly sweeter. The Bosc is firmer, with an elongated shape and a lovely golden color. The Comice is round shaped with a short neck and stem, whereas the Concord is known for its elongated shape and firm flesh.

Where are the growers?

In the USA, pears are grown mainly in Washington and Oregon, with more than 1600 growers in those two States. 75% of Canadian pears are cultivated in Ontario's Niagara Peninsula. The US is the third biggest producer in the world, just behind China and Italy. Many pear orchards have been in families for generations and each pear is plucked by hand with great care because pears can bruise easily.

A medium pear contains 100 calories; about the same as an apple. It is a good source of vitamin C, an important antioxydant that helps build bones and tissues and to protect against many chronic diseases and hypertension. It also contains other antioxydants, which contribute to fight against health problems such as diabetes, cancer or heart disease. It is very rich in fibers (5g per pear, which is 20% of your daily required intake) and folic acid.

How to choose pears

Simple suggestions to serve pears
For paddlers, pears can be prepared in salads, poached, as butter or sauce or in desserts such as cakes or pies. When you eat them at home, you can make a fabulous "poire Belle-Hélène" with vanilla ice cream, chocolate sauce and whipped cream. 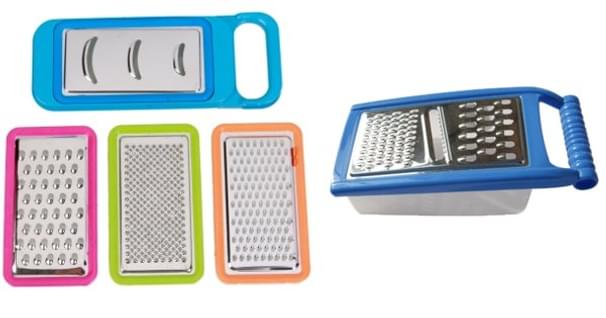 Of all the camp kitchen essentials, the grater is one of the last tools I would want to leave behind at…

Sweet bars are part of my best childhood memories. They bring me back to a happy time when mom would…

Hot Beverages for the Cold Season