Hi, Jeff Little here. I'm the regional Pro Staff director for the Wilderness Systems Fishing Team. In this Paddling.com video fellow Pro Staffer, Juan Veruete, and I, we're going to cover some paddling skills that are going to make you a more effective angler. Both of us have earned America Canoe Association certification as paddling instructors. And while at first glance it may not look something like having proper paddling form is that important to you as a fisherman. We're going to go ahead and show you a couple of tricks that really are going to help you improve your paddling technique but also improve your effectiveness as a fisherman from this platform of a kayak.

There are three parts to any paddle stroke; the catch where you insert the blade into the water, the power phase when you bring it back, and recovery when you cleanly bring it back up. The one that I think is of most important to kayak fishermen because it has a link to your stuff is the catch. You want to insert the blade in such a way that you get a good, clean seal on the back of that blade. And what I'll do is I'll demonstrate one good catch and one poor catch.

The good catch is you insert then you pause and bring it back as opposed to a poor catch where you just go straight into the power phase. You can hear the difference and so can the fish. So in your catch, make sure that you pause for just a moment and then come back. Beyond the stealth aspect of having a good catch, you're actually going to get much more power during the power phase if you're not dragging that mixture of air and water on the back side of your blade. So you're going to get to the fish much quicker if you're an efficient paddler.

One of the things that I noticed most about kayak anglers when I'm teaching to paddle during my classes is that they tend to use their arms a lot in their forward strokes and sweep strokes, like this. That'll actually lead to repetitive motion injuries in your wrists, your elbows, or in your shoulders. What you really need to do is kind of create a box here, and you don't want that box to break down too much when you paddle, and you want to engage your core, engage your torso. Basically, when you paddle like this.

Use A Ferry Angle

We've got a situation here where we're going to need to ferry from a rock to one rock and fish those eddies behind them. We've got a rock here, a rock here, and we've got flow. Most anglers will just go from this eddy, behind this rock, and just kind of paddle across that flow or across that chute, and you push down river and have the paddle back up again. To combat that, what we're going to do is ferry across. We're going to point our boats at about 1 o'clock, maybe 2 o'clock depending on flow. Heavier flows closer to 1, and we're going to slide our boats across those chutes so we don't get pushed downriver and we'll slide right into that next eddy and begin fishing from there. 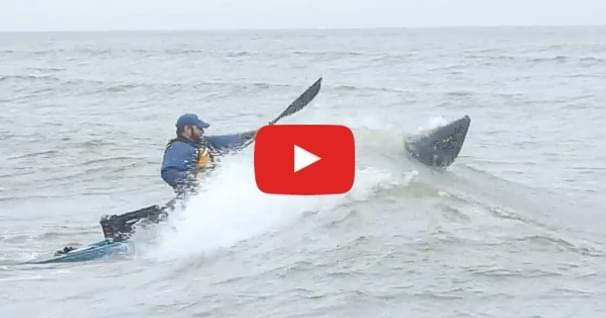