Ever look back on a series of decisions that you've made while paddling and wonder how one slightly different choice would've affected the outcome? Check out this video discussion on cascading events and high wind exercises while paddling.

So here’s a quick discussion on decision-making and cascading events.
First I want to say “thank you” to everybody that's been writing in, e-mails, notes, comments, questions. Just know that I am trying to get back to everybody, I will get there eventually.

Now, we spent the last weekend in Maine at the Midcoast Rendezvous. It’s a great symposium, almost 100 paddlers, lots of fantastic coaches, and I really wanted to discuss a little nugget that I learned. This is why I love symposiums, because you really never know what you're going to be learning. Sometimes the bit of learning you take away is not while you're actually on the water, but afterwards when you're discussing certain things that happened during the day.

There were two paddlers within our small group whose skegs were not fully functional. I was one of them – because I've been using my kayak for playing and surfing mostly since I've gotten it this year. And because my boat turns so easily, anytime I was in a high wind situation I never really depended on the skeg. I was able to easily turn and deal with the wind in whatever way, because I also think sometimes it's good to not use a skeg and practice corrective strokes – just not depend on it.
Our coach Ben took the time to do a rock landing and then we took both of our boats one at a time, pulled out the skegs and made sure they worked. Then on we went. The exercises we did in high winds were fantastic because although you can learn as much as you can from a book, videos, and try to understand what happens with the physics behind weather-cocking or lee-cocking, it's very different to then go to a windy place and actually get to practice those things.

We found a sheltered area that we could talk and discuss these exercises and then we would peek out into the wind play around, come back and discuss what we found. It was very interesting to see, for example, Bruce pulled off a full turn where he almost barely paddled because what he did was: he went out into the wind, then brought up the skeg and let his kayak turn into the wind. Once it turned into the wind, he then back paddled ever-so-slightly, dropped the skeg, locked in the stern and let the wind push his bow back around. So essentially he did a 360-turn with almost no paddling at all. It was mostly done with keg work and then locking that bow and stern, in turn, so that the wind was really pushing the boat around in a way that he wanted.

That was really interesting and I had a lot of fun playing, and seeing how paddling forwards, paddling backwards, seeing how I could unlock certain parts of the boat and then let the wind do the heavy lifting.

But that's not the point of the discussion. The point of this discussion is that once we safely landed later on, we were debriefing and Bruce brought up the point that he really appreciated that Ben took the time to make sure that both Whitney and my skeg were fully functional before we went on with the day. Part of it was not only because some of the day's events were going to be practicing different maneuvers with different amounts of skeg and skeg work in general. We have really strong winds, why not take advantage of them?

The second part of it just from a safety perspective, Ben made sure that every single paddler in our group had a functioning skeg. If the weather deteriorated to the point that even our sheltered areas were really dangerous, we would be able to handle our boats more efficiently and have an easier time dealing with strong winds. So that set off a conversation in decision-making and cascading events where a lot of times making one single decision can then turn into a snowball of other events that you might have not foreseen in the beginning.

They might be very, very easy to deal with at that moment, for example, how many times have we gotten on the water and we've forgotten our first-aid kit, or a VHF radio, or a towline, and we think “well, I'm going to be going close by, or it's going to be a really nice day on the water, I don't really need it” and it just led that conversation of how many times little decisions that we might make that could potentially turn into big, big problems later on if those cascading events actually all lined up, but in a negative way. But they could happen.

Instead, if we sometimes take certain small precautions and take small steps we can just completely erase those from the possibility of what's happening. As a guide, as an instructor, as a coach that's taking care of other people, that's crucial because not everything is up to you. So you're trying to limit all the things that could go wrong and a lot of times when you hear of events where people got hurt, or people were stranded, or people lost a boat because of very heavy winds, you can usually go back and trace it to one decision that then sparked a lot of other decisions that maybe wouldn't have been needed if that one decision was taken in a different way.

So I'd love to hear if others have had similar situations where you've had, let's say, a bad day on the water and you can trace it all back to one single decision. I know sometimes the decision can be as silly as “well, we should just not have gone out that day.” But on other days that other things have happened, can you trace it back to one or two decisions where something, just a couple of minutes of extra time could have made a big difference in the way the events unfolded that day.
I want to say thank you to John, Jonathan, Kelsey, and all the great coaches that were at the symposium, all the great paddlers I met, so many great people I got to paddle with, a lot of people that I hadn't seen in a long time, it was fantastic. Thank you, thank you, thank you.

Please do leave a comment below if you want to learn more, or if you want to share your story, I would love to hear it. I hope that was helpful. Subscribe if you’d like, I'm always trying to put these videos out, and as always, Luke Rovner for Kayak Hipster, thank you for watching and see you next time. 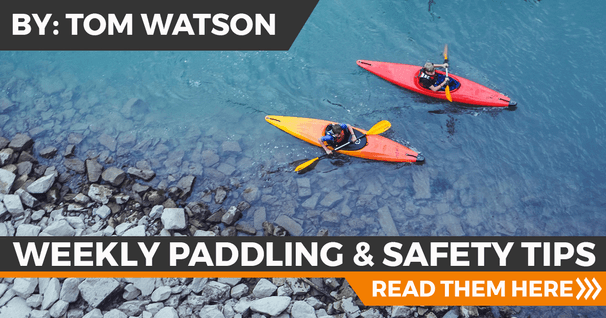