How many times have you decided at the last minute to throw some gear in the car, load up the boat, and go paddle/fish ? Let me tell you a story about how a series of events can change your life.

Several years ago, I spent the summer working in PA. I lived up there, and would normally fly home every other weekend. One weekend in August, I landed late Friday evening, and my wife and I decided to take a paddle the next morning. At the time, we lived at Pass-A-Grille (St. Pete Beach, FL) and had paddled across the channel over to Shell Island on numerous occasions. It sounded like a good thing to do Saturday morning.

We got up Saturday morning, walked down to the beach. The water was slick as glass, clear skies. I had checked the tide charts earlier, and we'd be paddling over on a rising tide, paddling back a few hours later at the beginning of the falling tide. The goal was to hit Shell Island before the normal weekend idiots came out to play, gather a few sand dollars, chill on the beach for a bit, and then paddle home.

Soon we had the boats on the beach, loaded with a cooler, lawn chairs, and a couple rods. I would be paddling a fairly new boat, my wife Mary would be in the boat she's paddled for over 4 years. I had only paddled this new boat on shallow flats (where I could literally walk away from danger), on picture-postcard flat water days. I would get educated today.

Just sit right back and you'll hear a tale, a tale of a fateful trip. That started from this sandy beach, aboard these tiny ships. The mate was a mighty paddlin' lass, the skipper brave and sure. Two passengers set forth that day, for a three hour tour, a three hour tour …

The paddle across the channel was pretty uneventful. Once we got over to Shell Key, we beached the boats, and picked up dozens of sand dollars. We paddled back to end of Shell Island and sat in those new beach chairs for a while. We figured we'd rest up a bit before we made the power paddle across the pass.

By now, the boat traffic is pretty heavy - it's around 2 pm. We should have been at this point around 11 am, noon at the very latest.

Somewhat rested, we pointed our bows into the channel, watching for boats, jet skis, and other fossil fueled vermin. It sure seemed like we weren't making very good progress, but we opted to suck it up, dig in, and press on. Due to this error in judgment on my part, the next series of events were destined to follow. At this point, the smart thing to do would have been to turn around, paddle over to a nearby restaurant, call some buddies to meet us over there and offer them dinner to transport our boats back to the house at PAG. I didn't do the smart thing. So, we sing again ... changing keys, of course:

Insert a new variable - WIND. So now, we're real tired from the channel crossing, the wind is blowing us toward Texas, and the waves are starting to pick up. We're straight out from our house, but definitely quite a ways out. Yeah, we're not where we want to be, but I'm still confident we can be home in time for dinner.

About that time I got caught broadside by a wave and over I went. I wouldn't sit on my boat again the rest of the day. The paddle was on a leash, but I was wearing a cheap, poor fitting PFD. So, as soon as I hit the water (which was over my head), the vest floated - I did not. I managed to get back in the PFD and cinch up the straps. I flipped the boat over after a few attempts in the 3 foot waves. Mary came closer. I instructed her to just pay attention to what was going on around her, so we both didn't end up in drink. She pointed her bow onto the waves. In the mayhem, I lost 2 rods, tackle, and a cooler. I also lost my hat.

After I made a few jokes, I figured it's time to get back in the boat. It wasn't too tough to slide back in. The hard part was sliding in, getting turned around into the seat, grabbing the paddle in via the leash and getting the boat positioned correctly before the next wave. I'd try, almost get there, and then get dumped again. Now is NOT the time to learn how to perform a deep water self-rescue. You can't imagine how quickly these factors will rob you of strength, and confidence.

During all of my attempts, Mary had suggested that we call for help, since she had her cell phone in her dry bag. Skipper don't need no help - we can handle this. My foolish bravado just about set the stage for one of those family reunions that no one likes … you know, where everyone wears black, sends flowers, comments about how "natural" we look. I remember Mary asking me, "What are we going to do?" I also remember saying, "I don't know." I saw a fear in her eyes that I pray I never witness again. Mary asked about making that phone call, and this time I agreed.

We were further out in the Gulf by now. Who knows if she'd get coverage this far out anyway. Luckily, her phone was in her dry bag. It didn't take her long to retrieve her cell phone and punch "911". Make this a mental picture. Mary's in her boat, paddling to keep close to me but not too close, keeping her bow into the irregular spaced 3-4 foot waves, with a cell phone mashed between her ear and her shoulder.

The "911" operator answered quickly - I took a huge sigh of relief. However, the operator could not grasp the notion that we were out in the Gulf of Mexico. After what seemed like hours, the operator finally asked Mary, "… are you near a restaurant?" This phrase would later be quite funny. However, right now, not so much. Normally I have my GPS with me - not today.

Mary's very slow to anger, but at this point she sliced and diced the operator. Pretty soon Mary was speaking to the operator's supervisor - and got results. In mere seconds (it seemed) he made things happen. Mary was successful in relaying our location, best she could, and he got the Sherriff's department and the St. Pete Beach police involved. He then forwarded the call to the Coast Guard.

I could tell from Mary's nervous laughter that help was finally on the way. Still, we both had to maintain our composure so the Coast Guard could write "rescue" on the paperwork, and not "recovery". I was very tired, and hanging on to that bouncing boat was getting to be more of a challenge. Mary was still paddling into the breaking waves, still on the phone.

While we were waiting for the officials, several boats passed by, but at quite a distance. Those little whistles are of NO value out there -- they only make you see stars from blowing into them.

However, time quickly passed, and soon four (4) boats showed up at once: the St. Pete Beach police, Pinellas County Sherriff, and the Coast Guard. Evidently, some students at Eckerd College had been listening to their scanners and sent one of their research boats out too. Mary disconnected from the call with the Coast Guard. Back in the dry bag it went.

All of us got a good chuckle. The Eckerd boat pulled up alongside Mary, the other boats chatted with the Coastie on the radio very briefly then went on their way.

Since I was laying across my boat, they asked if I was injured. I replied, "Nope, pride heals." Once I got close enough, the Coasties grabbed the bow handle of my boat, I got off of it and grabbed the side of their pitching boat. The seas were rough so I got knocked around pretty good. They worked me down to the back of the boat and pulled me in - I was very little help at all - dead weight. I can't express to you how great it felt when my feet hit the floor of that boat. The crew from Eckerd assisted Mary and pulled her into their boat.

The Coasties wanted to know where we lived and it took a minute for them to understand that we live right on the beach. I went on to say if they wanted they could just drop us off at our house. They didn't have a problem with that, and we got underway. After a few minutes I asked them how far offshore we were - over FOUR MILES. They also said that they saw Mary's RED boat first, and then my YELLOW boat.

Time for some paperwork... gotta get my name, address, etc. I was so rattled and confused all I could do was reach in the pocket on my seat and hand them my fishing license. Once all the paperwork was done, we chatted a bit - they all were interested in the kayak, and about fishing from it. I wasn't to chatty right then.

Once we got close to the beach, the Eckerd boat assisted Mary back into her boat and she paddled on in. I opted to tighten that PFD and just swim in. Once I got sand in my toes, I waved our rescue boats off. Mary and I gave each other a memorable hug, and then dragged the boats up on the beach. After catching our breath, we took our paddles and PFD's, but left the boats. 300 feet and we were HOME.

Once home, we changed clothes, got something quick to eat (cheese, I think) but we still didn't say much. We later walked down to the beach to retrieve both of the boats. Mary's boat had a little water in it (maybe 2 cups), but mine had a couple gallons. As many times as it was flipped and buried in the waves, I'm not surprised. Once drained, I brought each boat back to the house. I threw them beside the house, where they stayed until I came back home from PA at the end of October.

On Sunday, we rested, rested, and rested some more. We didn't talk much. I had to fly back to PA that afternoon.

Mary said the flowers she received Monday morning were the prettiest she's ever seen. If you're wondering how she managed to stay in the boat and on the phone, while paddling, I have an answer - evidently, angel wings are waterproof.

THE MORAL OF THE STORY We're big kids, no need to preach. Just remember life is tough enough without us doing stupid things to make it worse.

See you (safely) out on the water! 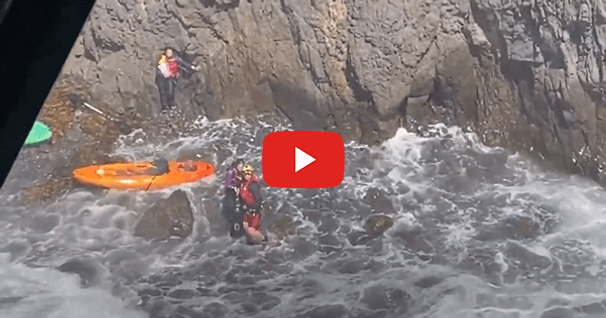 Safety Report By Moulton Avery of the National Center for Cold Water Safety On August 11, 2020, two…