Boats are like potato chips. It's mighty hard to stop with one. Sometimes the home fleet expands to meet the needs of a growing family. At other times a lone enthusiast simply can't resist acquiring a different boat for every type of water she paddles, in much the same way that golfers fill bulging bags with different clubs—yet never seem to have the right one for the lie they're on. Most often, though, paddlers collect boats for the same reason that hunters collect guns and anglers collect rods: the best boats embody an elegant synthesis of form and function. Good boats look good, in other words, and we feel good whenever we look at them.

But that's where the comparison breaks down. Boats aren't golf clubs, rods, or guns, are they? Unless your fleet is limited to "boats in bags," it's not very likely you'll be able to house your collection in a closet. That said, you can't simply toss canoes and kayaks willy-nilly into the backyard. Boats need to be stored someplace that's safe and secure whenever they're out of the water. It doesn't have to be anything elaborate, however. Modern materials will withstand most extremes of weather. A sheltered outside berth is just fine. For example, here's our faithful whitewater workhorse, an Old Town Tripper, doing double duty as a cover for the kitchen woodpile: 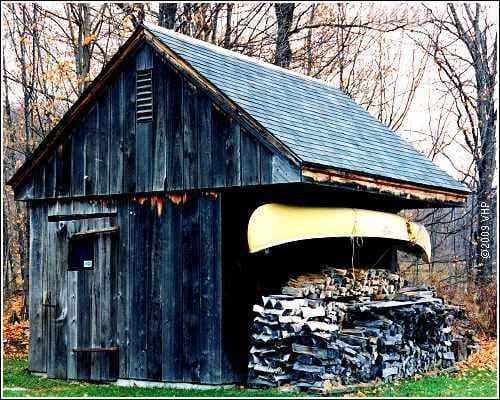 Simple lashings hold the Tripper in place in the fiercest gales, while the shed roof's overhang protects the boat's hull from snow and sun. The locals like it, too. Birds, squirrels, and chipmunks all enjoy sitting under the hull. It's a snug spot from which they can survey their world.

So far, so good. But suppose we had nine boats? What then? Well, one In the Same Boatreader, Dave Birren, doesn't have to suppose. He's got nine—yep, you heard that right, nine—canoes in his home fleet. And he's found a place for every one. Here's how he did it, beginning with his… 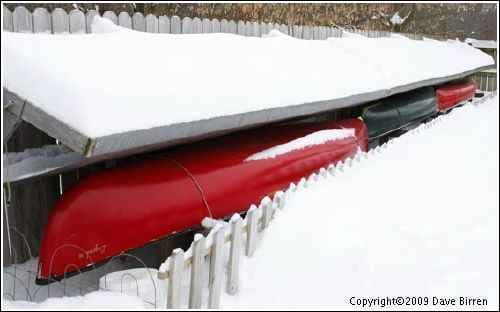 The canoes rest on simple wooden Ts. A long shed roof supported by sturdy dimension lumber keeps snow from weighing them down, while fences—wooden ones on either side; wire ones at the ends—hold the winter drifts at bay (not to mention protecting seats and thwarts from dogs looking for something to chew on). Is access a problem? Nope. The low wooden fence in the foreground is made up of six sections, and the fence posts are fitted into 2-inch PVC pipes sunk into the ground. Each panel is easily removed as needed, while tie-downs protect the sheltered boats from being whirled away by the Old Woman's wrath.

Want more details? This fall photo reveals all. Now you can see that the shed roof is formed by tarps, laced to a wooden frame with quarter-inch braided nylon line. Each boat has its own tarp, and each tarp is supported by three trusses, all sharing a common fascia. The tarps are lashed to stringers on the high back fence, and the lashings run through eye-bolts spaced about one foot apart.

Now here's a close-up of an end truss, built from two-by-fours: 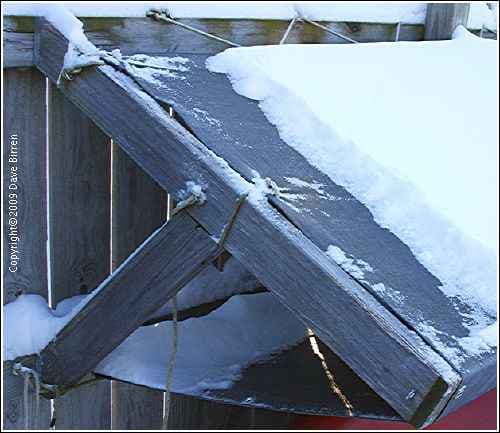 Note how the tarp wraps around the fascia and continues back to the high fence, forming a sort of soffit, as illustrated in this photo of a middle truss: 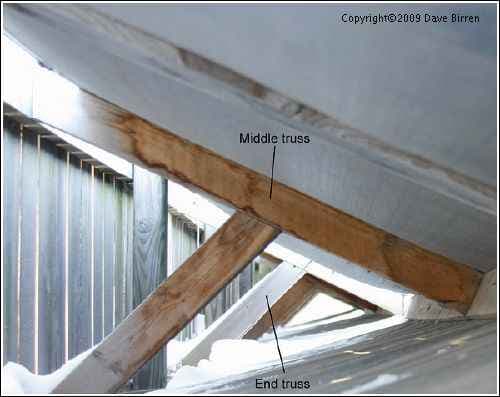 The result? A double roof, with each component angled to facilitate runoff.

Mighty impressive, eh? But Dave's not completely satisfied. If he were starting from scratch, he says he'd extend the overhang further to provide even more coverage. As it is, though, the nearby trees offer adequate shade. His boats won't suffer sunburn!

That's three canoes down. Only six to more to go. And they're…

Some boats thrive in the open air. Others, including wooden or wood-canvas boats—or any boat with lots of vulnerable varnished trim—are best stored indoors. That's why Dave turned to his two-car garage. It took some doing, since the overhead door takes up so much space, and since it's good to be able to drive a car into the garage from time to time. The secret to getting your fleet under cover, Dave reports, is knowing how (and where) to stack 'em.

This is a view of the left-hand wall of the garage. Cradles cut from two-by-two lumber, suspended on 5/16-inch line, support the topmost boat, a beautifully finished cedar-strip tandem. Blocks (aka pulleys) make raising and lowering the boat a snap, while cleats secure the bitter ends of the lines—or "lifts," as they probably ought to be called. The lower boat can also be hoisted high, slung in a second set of cradles hanging from eye-bolts on the underside of the first (see next photo). In the photo above, however, the second boat rests temporarily on supports. These have pivoting wooden arms that fold against the wall when not in use. Now here's a picture showing both canoes up in the air: 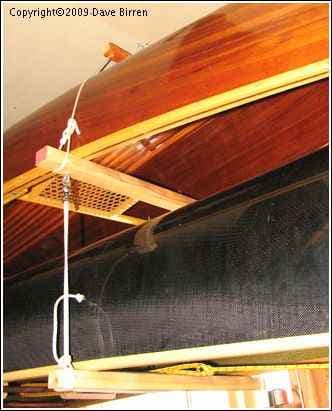 Snap-links at the top of the lines supporting the lower cradles make hanging them an easy job. Let's step back and admire Dave's handiwork from a distance:

OK. That's five boats down…er…up: three under wraps outside and two inside. But that still leaves four more. Here's the next chapter in Dave's storage story:

Two canoes hang side by side at the back of the garage, hoisted high enough to ensure free and easy access to the door and the storage space along the wall. (A third boat, not shown in this photo, now nestles in the narrow space between the garage door opener and the light fixtures.) And where is the last boat? Along the right-hand wall, of course!

This elegant craft (a Bell Wildfire) hangs above a pegboard—out of the way but easy to get at. The key? As before, it's Dave's ingenious system of lifts, cleats, and blocks, a fine example of the rigger's art and one that would be the envy of any tall-ship sailor. 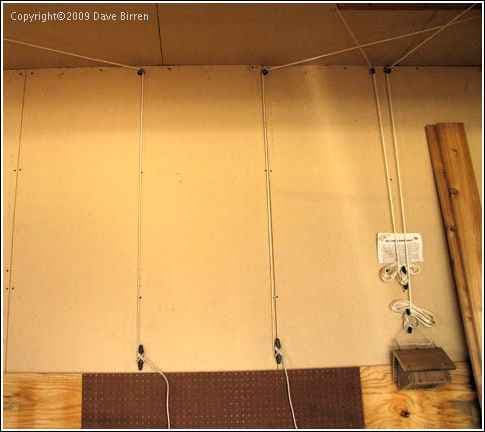 Now here's a close-up of one cradle and its lift. The blocks are Ronstan® pulleys, each one rated to 170 pounds. This isn't a place to cut corners. When you're hoisting a prized boat high over your head, it's better to be safe than sorry. 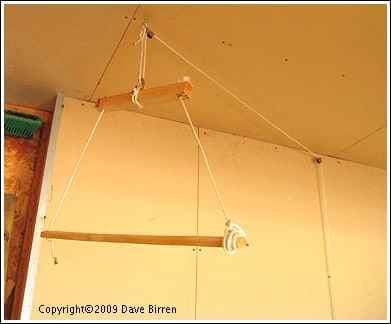 The short spreader above the cradle minimizes sway, while the tackles (see the next two photos) make the job of raising a heavy boat almost effortless.

The lift is made fast to a hook screwed into a ceiling joist, and the hook is angled so that the line exits the standing block—that's the pulley fixed to the hook—with a clean run to a turning block on the wall, high above the cleat. Take another look at the photo above. See how the lift runs from the hook through the running block on the spreader to the fixed block, and from there to the turning block and, finally, the cleat. This gives just enough mechanical advantage to insure easy lifting. It's the best kind of engineering: simple and good. You can't do better than that, can you? 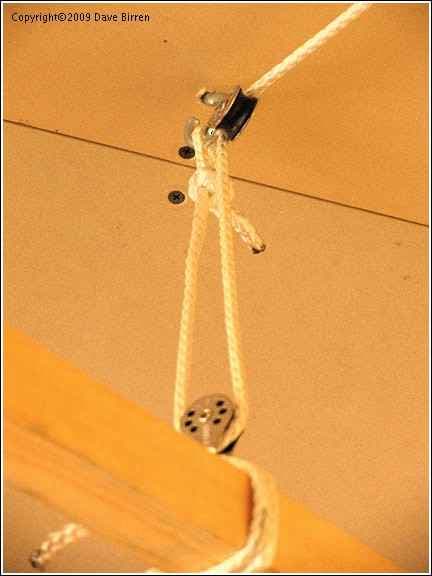 Nine boats. Nine berths. I'm sure you get the picture. Dave makes it look like a piece of cake. And—now that he's shown us how to do it, at any rate—it is.

Many paddlers would be happy to add another boat or two to their home fleet, but there never seems to be enough space, does there? Well, I've got some good news for you: This doesn't have to be a deal breaker. As Dave Birren has demonstrated, a little planning goes a long way, especially when it's given a boost by a large helping of ingenuity. Thanks again for the guided tour of your indoor-outdoor boathouse, Dave.

To learn more even more about Dave's "Better Boathouse," be sure to visit his website, aptly christened Insight. There's not a moment to be lost! Spring is in the air in Canoe Country, and a lot of us will soon be looking for a (little) ship to add to our fleet. Luckily, there's almost always room for one more. 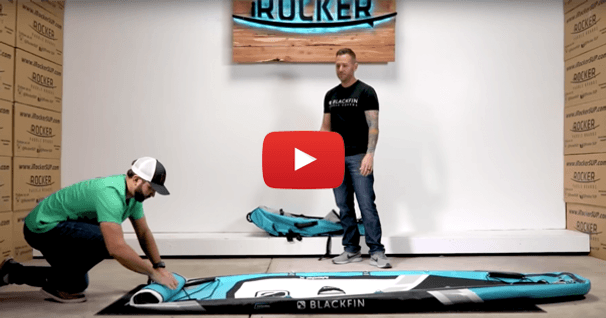 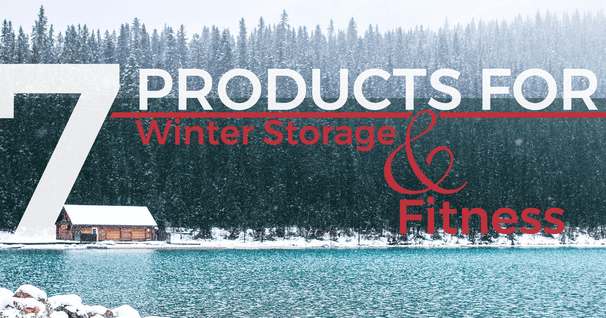 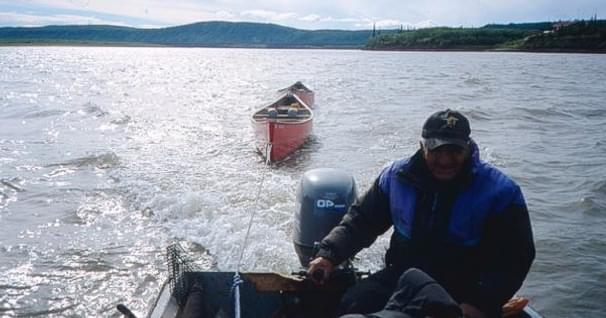 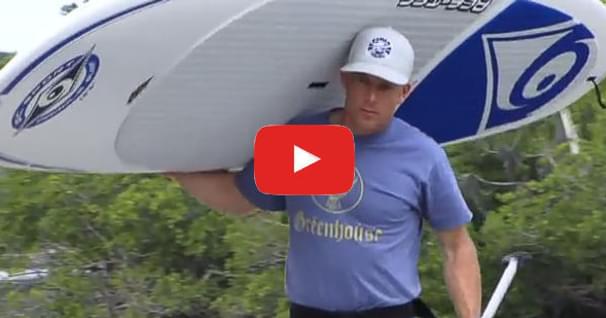 How to Carry Your SUP

Standup paddle boards tend to be pretty big and a little awkward to carry. So unlike typical surfboards,…