What's the best way to quiet a novice paddling class? Mention the "Eskimo Roll." Nothing worries beginning kayakers as much as those two words - I know from personal experience - but the skill they represent is crucial to on-water safety and something that every paddler needs to know. It's scary, and the learning curve is frustratingly steep, but a good roll will save your life over and over again ­ something you wife/kids/mom will certainly thank you for later. As nerve-racking as it might be to throw your head and torso underwater, twist into ungodly contortions while submerged, and "snap" up out of the water to a sitting position, it definitely beats the alternatives: staying down there for an extended dive or wet exiting into unknown water.

Most of us start our rolling careers in the relative safety of a pool or lake. (Note: winter is a great time to get these rolling classes out of the way because (1) you'll be ready to go as soon as the spring water starts running, and (2) nothing beats driving down the road with a kayak strapped to your roof in the dead of winter). The basic maneuver is simple: roll upside down, brace your paddle for balance, and then flip yourself upright again with a simultaneous hip snap and paddle stroke.

But, it doesn't end there. There are as many different types of rolls as there are situations in which to use them. Some rolls are easier on calm water, others are smoothest in the current; some work best from unusual positions or as protective measures in rocky water; some rolls are designed to get you out of tight spots, others to show off your control and prowess. There are literally hundreds to choose from, these are just a few of the most common.

The most commonly used roll because it is easy to learn, easy to perform on open water, and generally keeps you protected while upside down, the screw roll is usually the first roll presented to beginning paddlers. For all intents and purposes, the Screw Roll is "the roll". Using a well-timed hip flick and a wide sweeping brace stroke, most paddlers are able to get up with little difficulty when performing this roll. The sweeping motion does, however, take up a lot of space on the water, and has a tendency to move the boat around while you're rolling, making the Screw a little less stable ­ a.k.a "bombproof" ­ on rough water or in high winds.

The premise is simple: while upside down, make a broad sweeping stroke from the bow of your boat toward the stern on the side you're rolling up towards. As you reach the midpoint of your stroke the paddle should bring your body to the surface; snap your hips and roll up to a sitting position. The classic Pawlatta Roll is a similar sweep roll that uses an extended paddle ­ in which you hold the paddle by the blade - for additional stability.

The C to C is named for the two arcs you trace in the water as you complete the roll: one out over your head as you align your paddle for the set up, and the second down into the water to bring you up again. It is considered a vertical roll due to these two strokes, both perpendicular from the boat. This deep stability and smooth execution make it a particularly bombproof roll on open water. Many whitewater paddlers prefer the C to C because it is very fast an obvious benefit in rough current and because it can be done in small passages where there isn't enough room to perform a typical Screw Roll.

It takes some practice to get the timing right, but essentially all you're doing is drawing your paddleperpendicular to the cockpit (the first "C"), and then pulling it down toward your head as you snap your hips up (second "C"). This roll offers a bit more support with the paddle as you snap up, but tends to favor stronger paddlers with a little more flexibility.

Certain situations call for the unorthodox ­ but extremely useful ­ Reverse Screw Roll. If you ever get off balance and flip, while playboating for example, and end up leaning back toward the rear deck, or have your paddle pinned to the stern of your boat, the Reverse Screw will get you up again without the time consuming effort involved in setting up for standard roll. Everything is the same as the Screw, just done backwards. This ease of execution from an uncomfortable position and the ability to avoid underwater obstacles like rocks ­ by minimizing your inverted time - are reason enough to add this roll to your arsenal.

The ultimate party trick roll, but also a lifesaver if you ever find yourself upside down without a paddle, the hand roll is just what it sounds like: a roll executed using just your hands. But, like most rolls, the secret is in the hip snap. Letting the boat float up toward their normal rolling side, experienced paddlers will lock their thumbs together to form a giant flipper and thrust against the water while hip-snapping. It's tricky to do properly, it's cool to see, and it's the "white whale" of modern kayaking. 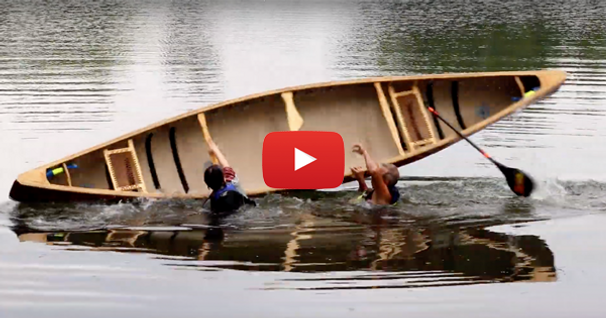 Canoe Capsize and Recovery In Under a Minute

Learn a fast, efficient and stable way to re-enter your canoe after flipping over in deep water.