Yet another factor in choosing a paddle is whether you want a one-piece or a paddle that breaks down – a "two piece". There are two typical reasons for wanting a paddle that can be taken apart. The first is simply to make it easier to store when traveling or to stow on deck as a spare. The second reason, one that seems to be perpetually awash in opinions, is the ability to "feather" your paddle.

Most every beginner has been asked "Feathered or Unfeathered?" or "Do you right or left feather?" My deer-in-the-headlights expression to either question – at my first, ever kayak symposium back in the mid 80's – pretty much marked me as the consummate rookie on that beach.

An unfeathered paddle has both blades aligned along the same plane. Lay an unfeathered paddle on a flat surface and both blades will lie parallel to that surface. Rotate one of the powerfaces forward slightly, say to 30°, and you've now "feathered" the paddle. The feathered blade is offset from the working powerface blade and then rotated into position during the power stroke on that side of the kayak. Since either blade can be the dominant or starting entry blade when rotated properly, whichever hand you use to control the rotation is your dominant/control hand. Even a left-handed person might opt to utilize a Right feather.

There are various degrees of rotation; some choose to go to the ultimate 90-degree right angle; others tend to range within angles between 30 and 60 degrees.

So, should you feather or not? A once highly contested and opinionated technique choice, the discussions about feathering vs. unfeathering have tempered over the years - from adamant rationalizing for one over the other into a matter of personal preference for either. That's not to say there doesn't remain strong feelings both ways as to which is the optimum orientation. As a prelude to that discussion, here's my biased opinion on the history of the feathered paddle.

Native paddlers never used a feathered paddle. Why? Derek Hutchinson once commented that it was merely that they just had never thought of it. Perhaps he was being a bit facetious. I respectfully disagree.

As kayaking evolved along the northern regions of the Pacific Rim of Asia, and later, North America, many paddling cultures didn’t even use a double bladed paddle. Many single paddles were very similar to canoe paddles and featured a long, relatively narrow pointed blade. Many of these paddlers, by the way, knelt in their kayaks – a position that might favor a single blade to execute a canoe-like stroke. Others did use the double kayak paddle so both were common through the ancient paddling world. And, look at Greenlander kayakers – no feathering in their paddles, either!

Limited paddle-making material was collected from driftwood washed ashore, including perhaps, timbers from shipwrecks. Many coastal villages at the mouths of rivers could often rely on trees that had been washed from along riverbanks in the interior of the continent to be carried downstream into the tidal flats.

Angling a blade beyond 20-30 degrees, cut from opposite ends of a timber would require a thicker/broader piece of wood to create a blade along a different plane angle from the other end. That's a significant expenditure of energy and time. This would have had to have been a one-piece feathered paddle at an unadjustable feather angle. That they would create a ferrule from materials at hand seems highly unlikely.

Natives developed the kayak, one of the most efficient human-powered vessels ever created, featuring technology, designs of crafts and gear that are still the foundation of form and lines used today. To presume they just hadn't thought of it in light of bifurcated bows, watertight seams and other innovations – balderdash!

Let's move ahead to the racing circuit, particularly the whitewater courses with their hanging gates and tight maneuvering runs. Wind resistance means loss of thousandths of a second in time; hitting a gate pole might cost a millisecond, too, or throw off timing. I'm not a whitewater guy but a common understanding is that feathering was born on whitewater courses.

Today the two most commonly acceptable reasons for feathering a paddle are:

Headwinds can affect an unfeathered paddle as the craft is directed into that oncoming resistance. Change the wind angle, to the side let's say, and that point becomes moot because with a feathered paddle, wind from varying degrees off port or starboard will produce a variety of similar affects on angled surfaces from those feathered blades as well. A side/quartering wind can sometimes push against the feathered blade in the upstroke position with enough force that it can cause a capsize if a paddler resists that push and clutches tightly onto the paddle. Experience soon teaches one to let go your upwind grip on your windward paddle and let the wind carry it to a point you can re-grip and swing it back into its proper position. The wind factor is valid but applies to both styles of blade alignment.

Greg Barton and Derek Hutchinson have both contended – and rightly so – that if your other paddling techniques are correct (posture, torso twist, etc.), you shouldn’t have any adverse wrist affects from using a feathered paddle.

Conversely, there are many who have tried both, who do suffer from wrist pain after prolong use of a feathered paddle, and have chosen to use an unfeathered paddle. It still all comes down to personal preference. 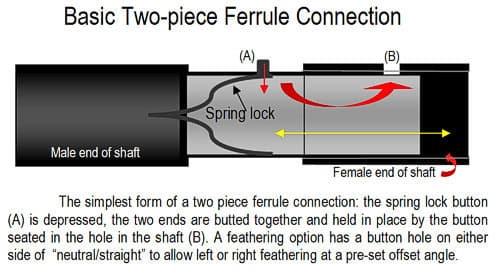 So, what if you do want to feather? What's the best two-piece system to get? What should one look for? Here are a few of the basic features to expect in a two-piece kayak paddle:

There are three types of ferrule systems/configurations currently on the 2013 market - each with its own attributes:

Internal components – these offer some form of cinch locking mechanism within the shaft that enables the paddler to expand the shafts apart and using a twist/rotating motion, select a desired feather angle. Some even allow you to change the length of the paddle, too. These then lock into place for a secure fit. The setting can be viewed through a small opening in the shaft and an engaging button lies pretty much flush with the surface of the shaft.

Collars/Rings – These are low profile, exterior components encircling the ferrule and rotated to lock/unlock ferrules in selected positions. As in most all ferrules, calibrations are marked on the shaft for easy adjustment. These "swellings" on the shaft are formed to allow a smooth flow across their surface. Both angle and length adjustments options are possible.

Both H20 Performance Paddles' Fast Ferrule (shown above) and Aqua-Bound's Posi-Lok system (shown below) use this type of ferrule.

Lever action – These mechanisms rely on a lever to exert pressure on a ring or collar positioned at the ferrule. The lever enables the paddler to clamp down on the shaft and firmly grip it in position for solid angle/length adjustments. Levers can be adjusted to change or re-secure the tension exerted by the lever. 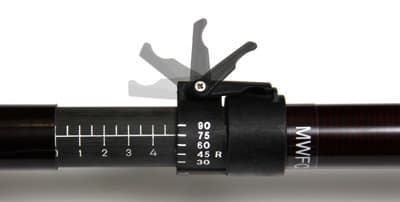 Some ferrules allow you to select incremental feathering angles. Popular off-sets usually start at 30 degrees and increase in 15-degree increments up to 60 and sometimes 75, and much less common now, 90 degrees. Other ferrules enable you to lock in at any angle between 0 and upwards of 60, 75 or 90. In addition, some ferrules let you stretch or shrink the length of your paddle by several centimeters. Again there are incremental adjustments or full-range feather angle/lengthening options. 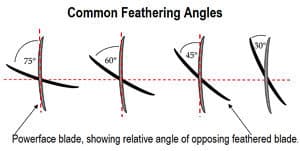 It's important to check out these systems and make your selection based in part on your paddling style and environment. So which one’s the best? That's up to you. How might your paddling style affect the type of ferrule you should consider? For example, do you tend to wear gloves? If so, which system will be the easiest to manipulate with those padded fingers – or cold hands? Do you paddle several kayaks using different lengths or styles of paddling? If you race, do you have an opportunity/need to change length or feather angle while on the course?

Hone your paddling skills with your best choice of feathered or unfeathered paddle checking hand positioning, torso twist, posture – all those critical components of proper paddling technique. Once your technique is correct and solid, check out the various options provided by today's manufacturers. You can learn all the details of each manufacturer's ferrule system on their websites - usually on the "Technology" link if not designated separately.

Selecting a paddle is as important as picking out the right kayak. If that first inexpensive paddle was a deal closer when you bought your kayak. Think seriously about an upgrade. The technology today is being incorporated by manufacturers to design and produce state-of-the-art paddles. A good kayak deserves an equally good paddle. Be safe; have fun out there. 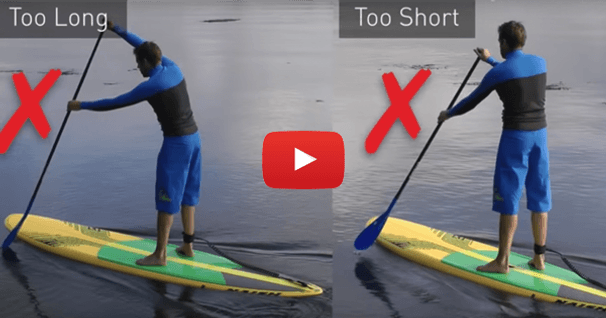 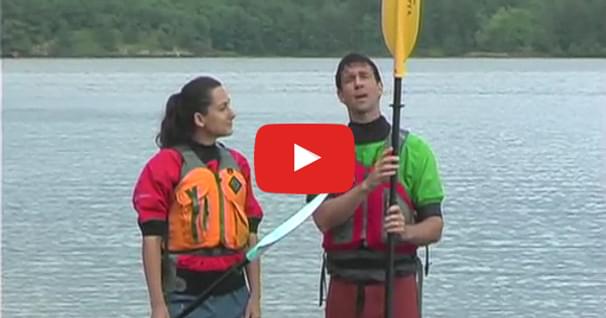