First off, let's talk about bulkheads in kayaks, which are walls that divide the kayak into separate compartments. Not only does this provide you with a relatively dry storage area, but it prevents your kayak from completely filling up with water if you flip. Most touring kayaks have a bulkhead behind the seat and then one just in front of your feet, which divides the kayak into three separate compartments. And so, if you flip and swim only the centre compartment gets swamped. If your kayak doesn't have bulkheads, you need to use float bags in the bow and stern of your kayak. If you have neither, you need to accept the fact that the kayak should really only be used in shallow water where if you flip, you can stand up and drag the boat in to shore.

To do an assisted bow tip out, the rescuer should grab the bow of the capsized kayak, with their own kayak perpendicular to it. The goal here is to dump as much water out as possible, then quickly roll the kayak upright. At this point, there are a number of different re-entry techniques. We don't have time to look at all of them, or the pros and cons of each, and so we're going to look at one technique which is very common and very quick for re-entering your kayak and it's commonly referred to as a 'side-sit re-entry'.

The rescuer's job is to stabilize the swimmer's kayak as they re-enter, and to do this, you'll position the empty kayak alongside yours, and then with a good grip on it commit your body weight to the empty boat. As the swimmer, you'll approach your kayak by the back of the cockpit, grab the cockpit rim, and let your legs float to the surface behind you. With a powerful kick of the legs and push with your arms, you'll haul your chest up and on to the stern of your kayak. Keeping low, you'll turn towards the stern as you lift your legs into the cockpit. You'll then slide back into the kayak while twisting around to your normal sitting position.

Even if you used the assisted bow tip out technique to empty the water from your boat, before you climbed back in, you'll probably still have a fair amount of water in your kayak right now. And so the rescuer should continue to hold and stabilize your boat until you've pumped that water out, put your skirt back on and are ready to go again. Well I hope you found this video helpful, but I would encourage you to go out and practice this technique, because this is something you want to be confident in being able to perform. 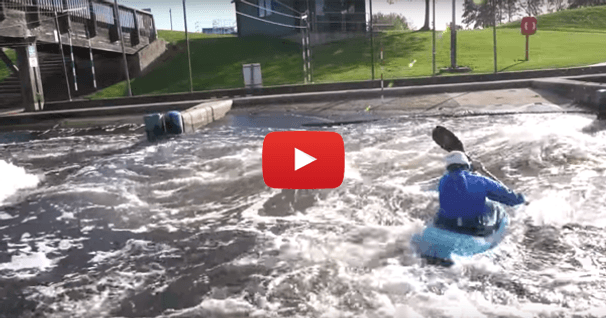