It's funny how things work in the wonderful world of foodies: synchronicity, that is. One day, you see a chef starting to use tiny glasses called "verrines" to serve all kinds of fancy appetizers to his clientele. Often, before you know it, you will be witnessing another cook revealing the secret of his "verrines" on the Food Network and the very next day you might read a story in Gourmet or Thuries food magazines about the same subject. Suddenly, you realize that "verrines" are the talk of the town everywhere, whether in the States, in France or in Australia. That's how sushi conquered the planet in a matter of months… Well, the same thing happened recently with "papillotes", which are basically a meal cooked in individual portions, either in foil or in parchment paper. Because the ingredients are trapped inside the little pouch and prepared with many aromatic veggies and herbs, aromas and flavors develop and intensify in the most amazing way. Fish, chicken, seafood and vegetables cooked in "papillotes" are tender, perfectly moist and bursting with personality!

Back from the eighties

I hadn't really heard much about "papillote cooking" since the '80s, until a major Canadian food chain recently launched three different frozen meals prepared using this method, and, almost overnight, they became a huge commercial success. Soon after, I was in Kelowna, B.C., for a wine show, and famous chef Rod Butler served me a 7-course gourmet meal composed entirely of those gorgeous packets. A few weeks later, when interviewing American celebrity grill guru Steven Raichlen, he told me that he has been experimenting a lot with "papillotes" on the barbecue recently and was very impressed with the result.

Bursting with flavors and aromas

There's a simple reason for the "come-back" of a technique originally popularized in the 80’s by French masters of "nouvelle Cuisine" and by "California cuisine" chefs, wanting to serve delicious foods without too much fat and calories. This method works! Our era is all about concentrating flavors to achieve a type of taste Nirvana, in a healthy way. "Papillotes" do just that. Ingredients are sealed, so they concentrate and blend their flavors and aromas through a cooking process called infusion. Food will also cook much more quickly because it is surrounded by hot air. When it's ready and you open the foil, you are immediately struck by the wonderful waft of aromas, the surprise that encapsulates the pleasure of cooking in "papillotes".

For canoeists and kayakers, it is one of the best way to get a great meal easily and quickly: just take some aluminium paper, cut a rectangle about a foot long for each portion, place some veggies, herbs, garlic, salt, pepper, than add either a fillet of freshly caught fish, some chicken, sausage; drizzle with oil, sprinkle a bit of salt and pepper, fold over the sides of the aluminum foil, pinch them sealed, and put on the camp grill, turning a few times. In 10 to 20 minutes you will have an amazingly delicious complete meal without even having to clean a single pot!

The "how to" of cooking "en papillotes"

Extremely good with fish, seafood, chicken and veggies, the basic principles of "papillotes" are easy to master and don't vary much from one dish to another. On a rectangle of aluminium foil (you could also use banana leaves or parchment paper at home), drizzle a bit of olive oil. Place finely chopped vegetables as a bed (onion, celery, carrot, leek) or put the fish or chicken fillet directly on the foil (oiled or buttered). Season to taste, garnish with more vegetables. Don't forget to use herbs and spices generously along with garlic, lemon rind, olives, dry tomatoes, capers, or any ingredient that will add another layer of flavor. Season again and drizzle with olive oil or a bit of butter to finish. If you want, you can add a few tablespoons of white wine or broth, which will steam your ingredients, but you don't have to. You could also give it an Asian zest, using fresh ginger, soy sauce, sesame oil and chili sauce too. Seal closely and completely, leaving a bit of space for the hot air to circulate freely inside the packet, then put on a grill. Depending on the ingredients and the size of the "papilotte", cook between 10 and 30 minutes, turning at least one time in the process. In order to succeed, the important thing to bear in mind is timing. Say that your trout fillet takes 10 minutes to cook. You have to chop your vegetable garnish in a way that will ensure that they cook in the same length of time. Other than that, it is very easy to prepare. If your fire camp is big enough, you can also prepare vegetable packets to accompany your main "papillotes".

Root vegetables and make ahead prep

I love to prepare a mix of thinly sliced potatoes, carrots and onions with a lot of garlic, thyme and marjoram. These root vegetables travel very easily in a kayak or a canoe. Two weeks ago, on our last kayak camping trip in Northern Maine, my husband also experimented with cabbage. It was so delicious I couldn't stop eating it! He just cut large sections of cabbage, wrapped them individually in foil, then he added a bit of herbs, garlic, salt, cumin seeds, pepper and olive oil and cooked it for 15 to 20 minutes. Wow! It came out nicely caramelized and was a real treat…

One thing I do often when I organize a camping trip is to prepare my first camp supper with "papillotes" at home just before leaving and to put each packet in a cooler with ice. It's very convenient because I just have to light the fire for our first meal and can concentrate on setting up camp instead of cooking. For campsites without a fire pit or where fire is prohibited we like to carry a very tiny hibachi grill that can be stored in the cockpit of one of the kayaks, just in front of the pedals. Desserts made in "papillotes" are also extremely popular. Try apples with currants and brown sugar, peaches or plums with cinnamon and a bit of butter and maple syrup. The only thing that's missing is ice cream!

Preparation (preferably at home because of the blanching of vegetables)
Blanch all veggies 2 minutes in salted boiling water. Remove from water and place in iced water to stop the cooking process. Remove from cold water and drain. Set aside.

Fold the foil over vegetables to form a pouch. Make sure that it is perfectly sealed, leaving a bit of room for air to circulate on top. Put each "papillote" on the grill over a medium fire. Leave enough room between each packet. Cook 8-10 minutes on one side, turn on the other side and cook 8 more minutes. Serve immediately.

Ingredients (to prepare at the camp):

Mix all vegetables, garlic and herbs. Drizzle with olive oil generously and mix again. Sprinkle with salt and pepper, divide onto four aluminium sheets. Fold and sealed perfectly. Cook over the camp fire between 20 and 25 minutes, turning every 10 minutes.

Ingredients (to prepare at the camp):

Drizzle olive oil on four sheets of aluminium foil. Alternate slices of zucchini, mushroom, onions, dry tomatoes, garlic and cheese. Garnish with herbs, drizzle generously with olive oil, sprinkle with salt and pepper. Close the "papillotes" and cook over the camp fire for 15 minutes, turning at least once. Serve immediately over rice or noodles or with bread for a complete meal. 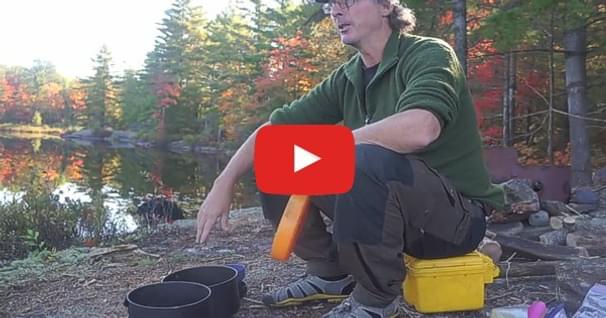 Kevin Callan gives some sage advice on cleaning up cooking pots and pans at camp, including where to…

Honey is probably the most ancient and purest form of sugar ever produced by nature. It's certainly the…

Summer Salads on the Go

Who says that planning a paddling trip means leaving your fresh fruits and vegetables behind? My buddy…