In a broad sense, mankind has always found a way to wet a line, so in that regard, fishing from a kayak is the same as fishing from any watercraft. However, the challenges associated with a particular craft is what adds a touch of adventure to this sacred outdoor ritual.

From an historical perspective, kayaks have been used for fishing for several millennia. By the time the Russian fur hunters overran the western coastal areas of Alaska, courageous kayakers were running down and slewing whales with poison-tipped harpoons and arrows. Now there's a 'catch of the day'!

Russian Orthodox priests recorded much of what is known about Native history in the mid to late 18th Century Alaska. Their notes and drawings show kayakers fishing for the huge, barn door flatfish halibut - from kayaks lashed in tandem side by side. Once a huge fish was hooked and hauled to the surface, it was clubbed and probably tied alongside the kayak.

Fishing is possible from any kayak although narrower, sleeker boats and most surf skis are just too nimble for any serious attempts. The sit-on types have flaunted their use as stable fishing platforms since they were first introduced a few decades ago. Today, some come with fishing contraptions installed from bow to stern. These and the wider, more stable "recreational" kayaks actually tout fishing as one of their main uses clearly marketing to this popular activity. For those who fish from sit-on's, and to a lesser degree, the wider, big-cockpit designed rec' boats, fishing is similar to that undertaken from a canoe or small skiff. It's when you fish from a conventional sea kayak that the game gets a little more exciting.

The paddler's inherent ability to steady the kayak throughout the various activities associated with fishing underlies the entire process. You have to feel at one with your kayak as you cast, retrieve, release or keep fish usually with both hands busily attending to fishing instead of paddling.

Sitting right in the water, elbows only inches above the surface, requires a few minor adjustments to any casting prowess one has achieved on land. Even fly fisherpersons have adapted ways to accent their casts from a kayak. One big hazard that kayakers face is hooking the lure or fly onto the back deck or rudder. It is nearly impossible to remove a barbed hook from the tightly woven deck lines used on most kayaks today. It's either get an assist from a fellow paddler or head back to shore (the third option is to break the line and get a new lure!)

That brings up the issue of fishing rod length. Some suggest a short rod that is basically an extension of hand jigging (a form preferred by many). While the short rod keeps all the action within a few short feet of the cockpit, it is way too short if a larger catch decides to run -- as is often the case with most game fish. Unless your rod tip can be swung completely around the kayak, beyond bow and stern, a fish cutting right angle escape routes under your cockpit will take your rod with it. Swinging a complete circle around your kayak assures you of being able to keep control of your catch no matter where it runs. I know some kayakers who are so good at 360 degree rod handling that they can even make pin-point casts backwards, over their head.

In some fisheries, creating complex lures from components is part of the overall experience. On the trail of ocean-run king salmon, for example, a savvy angler knows that a combination of divers, skirts and other components are sometimes needed to fashion just the right lure for ideal depth runs and current speed. It's usually a matter of bringing an assortment of tackle on board and creating that killer lure on the spot. It goes the same for kayakers, too, with a few minor restrictions.

Lacking a working deck or bench or over generous storage space, a sea kayak has limiting room for any kind of tackle box bigger than a carton of cigars. Most of us who kayak fish use tiny lure boxes that contain a half dozen pieces stored in tiny compartments. Most of the lure preparation is done using the spray skirt as a workbench. Back to those ocean-run kings. I learned that kings were hitting on squid lures, augmented with hoochie skirts and brought to the proper depth with a mini diver -- all separate pieces that have to be strung together, properly weighted and then clipped on to become the mega-lure of death. I had just spent nearly $30 at the local tackle shop getting outfitted with a duplicate set of each, plus a few extra skirts and fake, gooey plastic squid. I paddled out to the headland of the bay where the kings had been spotted and, floating about a mile from shore, preceded to string all the lure pieces together. It was a beautiful assemblage of brightly colored beads, enticing tentacles, juicy-looking fake squid and a shiny, rainbow-sheen mini diver. It made my mouth water just looking at it.

All the while, both hands were fully occupied and my concentration was totally fixed upon completing this alluring fish feast. I hadn't noticed the passing charter boat --or its wake. Suddenly my kayak lurched and I let go of the lure masterpiece as I instinctively reached for my paddle that had been lying in the ready across my cockpit.

Now, my neoprene spray skirt fits snuggly across my cockpit. It's springiness reminds me of a mini trampoline covering my lap. I figure my salmon rigged lure weighed at least six to eight ounces. Falling from about 14 inches onto the stretched neoprene proved just enough bounce to launch the entire unit up into a gentle arch that caused it to do a beautiful half gainer into the north Pacific. I watched as $15 worth of never-before-used tackle did a beautiful glittering spiral descent to the bottom. It is best to prepare your lures ahead of time.

The real challenge of kayak fishing is what to do once you've caught the fish. Being so close to the water you have to remember to keep the rod tip especially high, almost vertical as you bring your catch up to the side of the boat. Once within such close proximity to you, as long as you keep its head underwater, you can determine whether it's a keeper or not.

There are three ways to land a fish from a kayak. The first is with a landing net, a tried and true method known to all. Once the fish is alongside the boat, grab your landing net that has been secured for easy removal from a bungee on your deck. Scoop up the fish, remove the lure and put your catch on your stringer (practice being ambidextrous).

The second method utilizes the stringer without the landing net. I have found that the best stringer for kayak fishing is the chain stringer with the shower curtain hooks attached to a light chain. One end is secured to your boat; the other end with the series of hooks is laid out on your deck. The end hook, nearest you, is open and ready to go. Once the fish is brought alongside the boat, the free hand is used to grab the open hook on the stringer. That end is hooked through the end of fish's lower jaw. Tension is applied as you put down your fishing rod and quickly snap the hook closed. You can then drop the fish back into the water.

The third method of retrieval is a quick-action move to save a fish precariously close to dropping off your lure. I hooked into a beautiful silver salmon that was barely attached by the tip of one of the treble hooks onto its boney lower lip. I let the salmon calm down for a second and then quickly hoisted the fish out of the water and up into the cockpit in one fluid motion. The instant it cleared the coaming, the fish broke loose and fell into the cockpit, right between my legs. For a second, I was relieved that I had saved this decidedly biggest catch of the day. Suddenly I realized that the brand new lure I had used was not dangling from the end of my fishing line. I looked down to see those shiney, razor-sharp hooks lashing out through the tight confines of my cockpit, still attached to the mouth of an extremely agitated and wildly thrashing fish.

The thought of a barbed hook latching on to my crotch section sent electrifying tingles up my neck. I have never since been able to scoot so far back in my cockpit as I did second before scooping that salmon back out of the boat. In most other cases, dropping the fish into the boat, sans lure, is an acceptable, but messy way of landing your catch.

Upon a day's successful fishing adventure, simply pull up your stringer, splay the catch across the aft deck of your boat and triumphantly paddle back to your home shore. The added beauty of kayak fishing is that if they aren't biting, there's always a distant bay to paddle towards. 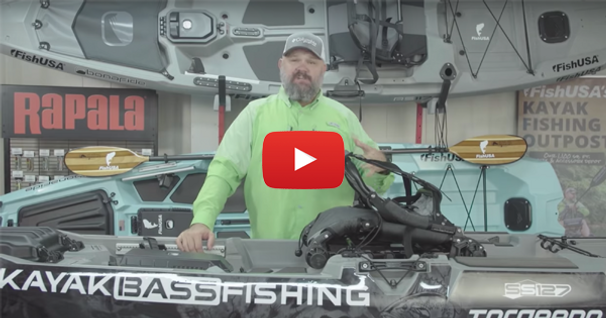