Eddy turn refers to the action of moving from the main current into an eddy, or vice-versa, and is also commonly referred to as "peeling" in and out, or "eddying" in and out. Simply put, eddy turns are the most important river running skill to develop. With eddy turns you can work your way down a rapid in small pieces, hopping from one eddy to the next. This lets you navigate most safely and confidently through both familiar and unfamiliar waters. Whether you're eddying in, or peeling out of an eddy, your goal is to break completely through the eddy line and to carve a smooth, arcing turn in which your kayak maintains its forward momentum.

To this point, we've looked at the individual components that are required to make a smooth eddy turn in earlier articles. It's now simply a matter of your piecing these skills together with the right plan of action. This plan of action is determined by your end goal and by the power and variety of the currents that you're dealing with.

Your success in running rapids relies heavily on your ability to look ahead and take actions that set you up for what is coming next. For simplicity's sake, let's assume that you're pulling out of an eddy and into a mild current without obstacles. Your goal is to carve a smooth turn into the middle of the current and then head downstream. You now need to decide on how much speed, angle, and spin momentum is necessary to achieve this goal. Again, these decisions depend on the strength of current that you're dealing with.

As a general rule, you always want to cross eddy lines aggressively. The stronger the current, the more aggressive you'll want to be. This might seem like a simple enough rule, but the reality is that as currents get stronger, paddlers often become more timid. An aggressive approach is vital, though, as it ensures that you'll break right through the eddy line and into the main current. Breaking through the eddy line, as opposed to getting stuck on it, means avoiding one of the most unstable and unpredictable spots on the river. Seeing as we are considering relatively mild current for this example, you will be taking a moderately aggressive approach.

Clearly, every situation will require a slightly different approach, but the basic eddy turn we're going to look at can be slightly modified to work in any circumstance. Your plan of action involves building up enough forward momentum to take you completely across the eddy line at about a forty-five-degree angle. As you break through the eddy line, you want your kayak to carve a smooth arc and end up facing downstream. This basic eddy turn starts with a good set up position and the right angle, forward strokes to build forward momentum, a stern draw to establish the boat's carving direction (spin momentum), a power stroke to pull the boat completely across the eddy line, and a gliding draw to carve a smooth turn downstream. Let's look more closely at each of these steps.

A good set up position gives you time to build adequate forward momentum that will take you across the eddy line at around a forty-five-degree angle. There are a couple of things to consider when deciding on your set up position.

Firstly, it needs to be recognized that the inside of an eddy provides the calmest water and will result in the least amount of "drift" on your approach. Drift is the movement of your kayak by the current in a direction other than the one in which you wish to go. The outside of an eddy has the quickest current and will thus result in the most drift. Learning paddlers have a tendency to hang out on the outside of eddies, where they are closest to shore. This actually complicates their set up as they will drift more on their approach and frequently find themselves having difficulty exiting at the point they have chosen with the desired angle.

A second issue to consider is that eddy lines are most defined and narrowest at their source (the top), which makes it the preferred area to cross, as there is less "funny water" and is more predictable.

Having established a good set up position and built up some forward speed, you then need to give your kayak a slight amount of turning momentum before you completely cross the eddy line. This turning momentum ensures that your kayak will carve in the right direction. Because whitewater kayaks are designed to turn so effectively, and since the main current will be helping to turn your boat downstream, you definitely won't need to use a full sweep stroke. Your goal is simply to start your kayak on its turning path, or to establish some turning momentum. This is most effectively done with a slight stern draw on the upstream side. With this turning momentum established, your focus is now on pulling yourself completely across the eddy line and into the main current, which is where the "power stroke" that we covered in an earlier article is so effective.

Recall that the power stroke is a vertical forward stroke designed to provide maximum forward propulsion with minimal impact on the kayak's turning momentum. When using it to cross an eddy line, your technique remains the same. You'll plant this power stroke across the eddy line in the main current and pull your boat and body aggressively forward. As you do this, you must be sure to have your boat tilted downstream. Holding a steady downstream tilt not only lets your kayak carve, but it prevents the main current from catching your upstream edge. The amount you tilt your kayak and the muscle you apply to your power stroke will depend on the speed of the water that you are entering. The faster the main current, the more aggressive your boat's tilt and the more powerful your stroke will need to be.

So you've now thrust yourself across the eddy line with your boat carving a smooth turn downstream. The final challenge is getting your kayak to continue carving this turn until you are facing directly downstream. You could continue to take power strokes while holding a steady tilt on your boat. This would allow you to continue carving your turn while maintaining your forward momentum, but it is not the most efficient and not always necessary.

Another option is to use the gliding draw. The gliding draw is a fairly static draw stroke that gets planted firmly in the water to help your boat carve more effectively and maintain speed. The gliding draw gets planted about a foot behind your hip and between one and two feet out to the side of your boat with the blade parallel to the kayak, and with your body turned to face the paddle. This is a very committing stroke in its purest form, so you may want to start more conservatively by keeping your top hand over your kayak. As your balance improves and your confidence grows, you can push your top hand across the kayak to get your draw more vertical. 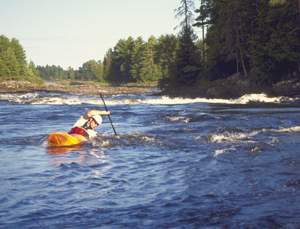 There you have the standard eddy turn technique. As I mentioned before, this technique can be adapted to fit almost any situation. One of the most significant modifications that you can make involves turning your gliding draw into an active bow draw. This lets you turn your boat downstream more quickly. An open-faced bow draw is commonly referred to as the "Duffek" stroke. It allows you to grab a substantial amount of water to aggressively pull your bow around. By dropping your upstream edge slightly, you can also use your Duffek stroke for a slight stern pivot, which takes advantage of buoyancy energy to further help your turn. When would you use this stroke? A Duffek gets used when we need to move from an eddy into the main current and face downstream as quickly as possible.

We will now take a quick look at pulling out of the main current into an eddy, otherwise known as "eddying out." You'll use the same technique that you used for peeling out of an eddy, although your set up is trickier because you have a large amount of "drift" to take into account. Your goal is to break through the eddy line as close to its source as possible, with your forward momentum breaking you through it on a forty-five-degree downstream angle.

To reach this goal, you need to account for the speed of the current that's taking you downstream. It is a simple notion that if you point your kayak directly at your destination, then the downstream drift will take you past your target; but most people have a challenging time mastering this kind of anticipation. You need to aim upstream of your target enough that the drift and your forward momentum lead you directly to your target on the eddy line. An important tip is to keep your eyes on where you're going when catching an eddy. Don't get caught staring at the hood ornament of your kayak!

Of course, practice is the only way to become truly proficient at reading whitewater and plotting a course to the next eddy, but there are a few key things you can keep in mind. It's essential to establish lateral momentum (momentum across the river) when catching an eddy, so that you can break right through the eddy line. This means that if you're planning to catch an eddy on the right side of the river, you'll want to start away from that right-hand shore to give yourself a chance to build lateral momentum toward the eddy. 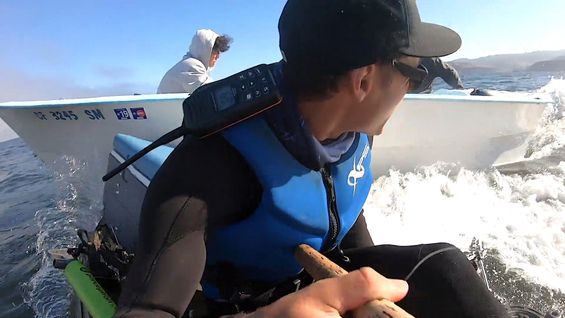 Whether you're an experienced surfer, or a first time SUP out in the waves, you'll want to find a wave…