Devil is in the Details

In the mid-seventies, I shared an afternoon with the famous woodsman, Calvin Rutstrum, whose flagship book, The New Way of the Wilderness, inspired my love of wilderness travel. I was heading north to Canada and had an 18-1/2 foot Kevlar Sawyer Charger (a huge, state-of-the art whitewater racing canoe) on my car. I thought it was the ultimate tripping canoe. Rutstrum walked slowly around the canoe, critically peering at it from every angle. Then, he stepped away and said: "Well, it's big enough. But, frankly, I wouldn't take anything but an aluminum canoe beyond the trailhead!"

I protested weakly, proposing that Kevlar would soon replace aluminum. At this, Rutsrum turned and faced me squarely. "Cliff, if there was a better way of doing things, don't you think I'd be doing them that way?"

Novices often perceive experts like Rutstrum as "highly opinionated", wrongly believing there is no basis for their dogmatism. But experienced trippers plan carefully because they know that small errors can cause big problems. For example, Rutstrum would leave his aluminum canoe out in the Minnesota woods all winter. You wouldn't want to do this with a Kevlar canoe!

Here are some "little things" that can make or break a trip.

Lines coiled and ready: You're paddling stern, sneaking along the edge of a dicey rapid, when a strainer suddenly appears. You pry the tail towards shore and back-paddle (backferry) furiously. As the stern runs aground, you jump out, pull the end of the coiled stern line and snub the canoe to shore. Thank goodness the rope reeled out perfectly. 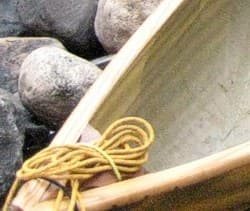 Store your map before canoeing rapids:

Map cases that are tied to thwarts or secured under loops of shockcord on thwarts can be ripped loose and lost in a capsize. Put your map in a secure place (e.g. inside a zippered thwart bag, etc.) before you start down a rapid.

Clean the seals on waterproof boxes:

Watertight boxes like those made by Pelican® and Otter® are reliable only if the seals are kept clean and free of debris. Inspect seals each time you open the box-one tiny wind-born seed can cause leakage! A wet cotton bandanna can be used to remove trapped particles. Lubricate the seals with silicone at least once a year.

Nylon tool sheaths that close with Velcro aren't secure in a fall or capsize:

Velcro closures are compromised by trapped sand and vegetation. Install a heavy-duty glove snap (on the Velcro closing flap) for extra security.

Use a plastic groundcloth inside your tent!

Tent floors wear and seams eventually leak. A plastic ground cloth placed inside your tent will keep ground water from reaching you. Make the groundsheet a foot larger than your tent all-around so it wraps up the sidewalls a foot or so. A groundcloth saved the day when this tent was flooded by heavy rain. 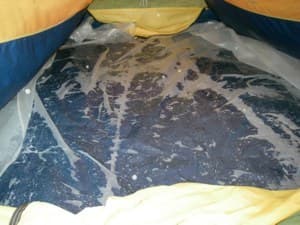 Bring twice as many stakes as your tent needs:

Use the extra stakes to anchor stormlines when the wind blows up. Double-stake troublesome spots-two stakes through one hole, each at a different angle.

When a storm blows up you may have just minutes to secure your tent or tarp. I carry 200 feet of parachute cord that has been pre-cut into 20-foot lengths. Adjusting cords during a storm - and removing them afterwards - is easy if you end your knots with a slippery (quick-release) loop.

Bring a hard case for each pair of eye glasses:

It should have a lanyard or carabiner hole so you can tether it to a pack. Tighten eye-glass screws at least once during your trip. The tiny Leatherman® Micra has a small screwdriver that fits eye glasses perfectly.

Make a numerical error while programming a GPS in UTM mode and you could be thousands of meters off! You won't make mistakes if you check your UTM-programmed waypoints in Latitude/Longitude format. Simply go to the set-up menu of your GPS and choose Latitude/Longitude coordinates. Roughly plot (eye ball 'em) the new coordinates on your map. Are you in the ball park? If so, switch back to the user-friendly UTM format. If not, check your UTM numbers again!

Keep your axe and saw accessible:

Seconds count if you need to free someone or something from a strainer. Keep these edged tools handy! Bert Heep, a long time employee of Piragis Nortwhoods Co. (Ely, MN) once had a tree fall on his tent during a storm. The tree pinned him and his wife to the ground. Fortunately, Bert had a saw handy and was able to cut his way out.

Experts keep their packs tightly sealed while they're in camp. Novices leave pack flaps and waterproof liners wide open so that critters and rain can drop in.

Don't lean paddles against a tree:

Paddles stored flat on the ground can't fall and break. Bent-shaft paddles should be set "blade up"-so the blade won't break if accidentally stepped upon. Don't store paddles under an overturned canoe: animals might gnaw on them or they could be flushed out and lost in a heavy rain (it happened to me!). I keep my expensive paddles alongside my tent.

A high wind can turn a canoe into a kite. Tie to trees or boulders. If there are none, pile rocks on top of your overturned canoe, or leave the canoe upright and place heavy packs or rocks in the belly. This is a common practice on the tundra.

Rigorously attend to the smallest cuts:

A tiny cut can become quickly infected in the outdoors. Clean (with soap and water) all wounds immediately; apply Triple Antibiotic ointment (Vaseline works about as well) and cover with a band aid. Re-clean, add ointment and change the band aid every day.

Take these items into your tent when you retire each night:

Water purification works only if you don't cheat:

Some years ago, I organized a canoe trip down Manitoba's Bloodvein River, which is famous for Giardia. We brought two water purifiers and used them religiously. Still, two participants caught Giardia. How? Probably from swimming, wiping their face with hands that were wet from river water, etc. Maintaining "water discipline" is harder than it appears. I might add that I can heartily recommend the new MSR MIOX purifier, which is about the size of a Magic Marker. The MIOX uses batteries and salt to produce a powerful disinfectant that kills everything. No pumping necessary-it purifies large volumes of water fast.

Know where your PFD is at all times. Do not store it under an overturned canoe where it could be washed away in a storm (it has happened!). In camp, keep it inside your tent (it's useful as a pillow and warm garment). Don't sit on your PFD or pile packs upon it. If you spray your PFD with 303 Fabric Protectant® once a year the nylon shell will last as long as you.

Attach your whistle to a D-ring on your PFD, not to the zipper pull:

Larry Laba, CEO of SOAR boats tells the story of a man who attached his signal whistle to the zipper pull on his life jacket. The man capsized in a huge rapid. When he came up for air he swallowed the whistle-and nearly choked on it!

As you can see, the "devil is in the details". Small errors can cause serious problems when things goes wrong.

We paddlers tend to reach for a boat, life jacket, and paddle as opposed to cranking up the A/C as a way… 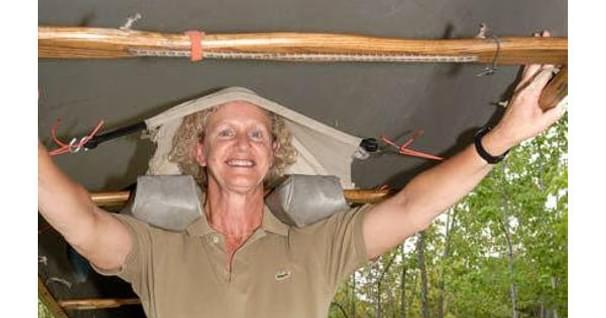 Dozens of new canoeing and camping products are introduced every year.  Some are honestly useful;…

Beyond the Warming Stone

Somewhere along Man's evolutionary association with fire, we learned that a stone magically took some of…