Boofing is the act, or art, of keeping the bow of your kayak from diving underwater, and it is without a doubt the most important skill to learn for paddling creeks. Most notably, you can boof waterfalls and steep drops, but you can also boof holes, pourovers, reactionaries, and even eddy lines. 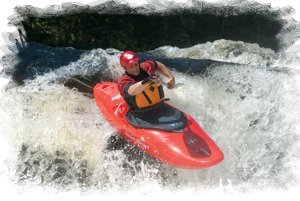 Boofing lets you run drops while keeping your bow from diving deeply underwater.

You should acknowledge from the outset that although boofing is a crucial technique for running drops, it can also be quite dangerous if not done properly. Landing flat from a drop of any significant height is going to shock your spine. This shock has broken the backs of paddlers on surprisingly small drops. Only experience can tell you when or when not to boof a drop.

For now, though, we'll focus on the general boofing technique that will take you cleanly over a small, vertical drop. This technique can be modified slightly to boof over many different features.

The success of your boof relies on two key factors: your set-up, and your boof stroke. As a general rule, you need forward speed directed at the steepest part of the drop, and away from the centre of it. The forward speed helps launch far enough to clear the hole at the bottom of the drop, and aiming for the steepest part makes it easier to achieve this goal. By directing your boof away from the centre of the drop, you are avoiding what is usually the stickiest part of the hole below. In many cases, you can even boof completely out of the main current and into an eddy. This of course requires plenty of lateral momentum on your approach.

This is also a great time to remember that rocks are your friends on creeks. If there is a rock at the lip of the drop, it might prove very useful as a launch ramp. The ideal boof rock is a rock that will give your bow a kick into the air without slowing your forward momentum too much. This means you want to hit the rock with your bow, but not with the rest of your kayak. Do this by establishing lateral momentum on your approach. If you hit the rock with too much force, or approach the rock too directly and catch it with too much of your kayak, then you'll be slowed right down and you'll have difficulty clearing the hole below.

Having successfully set up your boof, let's now take a close look at the boof stroke, which is the last stroke that you take as you drop over the lip. The boof stroke requires a combination of timing and power. The timing of the stroke is fairly straightforward. Plant the stroke just over the lip of the drop, where you can get the most pull away from the falls. On shallow drops, this sometimes means that you actually pull against the face of the falls.

In regard to the actual stroke that you'll use, let's refer back to the "power stroke" that we covered in an earlier article. The power stroke is a vertical forward stroke that propels your kayak forward without turning it. Since your goal for boofing is to launch yourself over the hole at the bottom of a drop, it should make sense that this "power stroke" will come in very handy. You don't need to worry quite as much about the stroke being perfectly vertical, but make sure it's powerful. 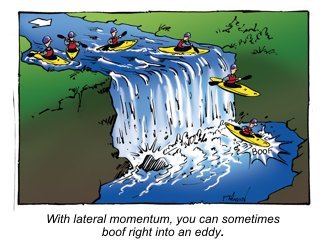 As you approach the lip of the drop, you'll reach forward and then plant your boof stroke just over the edge. At this same time, the bow of your kayak will begin to drop over the falls. Now is the time to pull aggressively on your boof stroke. As you pull on the stroke, you'll thrust your hips forward and past the paddle blade. The further you pull this stroke, the more lift you'll give your bow. This means that when you want to land the flattest, your power stroke will pull right past your hip and your hips will be thrust hard forward so that you end up in a leaning back position.

Contrary to popular belief, you're not done yet! You now need to prepare for your landing. You always want to land in your default body position, otherwise known as the "moderately aggressive" position. Landing like this helps prevent your boat from being back-endered, it helps you cushion the blow, and it allows you to control your kayak from the moment it touches down. For further control, you should land your boof with a paddle blade in the water at your toes, ready as a brace or to pull you forward and completely away from the hole at the base of the drop. 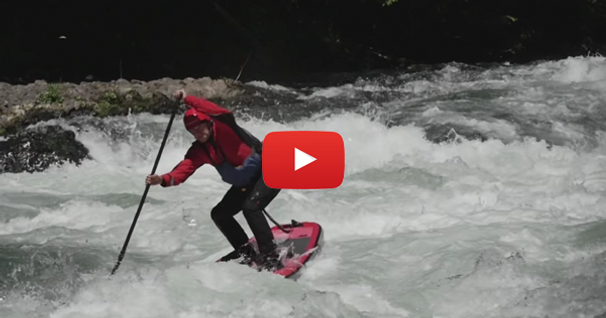 How to Brace a SUP