I've had some really bad luck dealing with bears. I'm not sure why. A bear biologist once suggested that it was due to my fear of the animal, explaining that if a bear senses any anxiety, he will use it to his advantage. His theory actually makes sense. 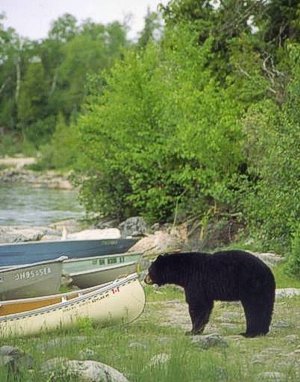 I had a bear scare me off my campsite and then steal a chocolate cake I was in the middle of baking. I had a bear bully me away from my camp gear while on a portage and then steal a tube of toothpaste from my pack. I had a bear harass me the moment I pulled into a park visitor center parking lot and then attempt to steal, oddly enough, my thermos of coffee. And I must admit that each time I was absolutely horrified. Who wouldn't be?

Out of pure desperation I soon learned to battle my bear phobia. The first time I stood my ground was at a public campground. A large male bear had bothered me to no end throughout the week. Finally, I couldn't stand the stress of having the bear intimidate me any longer. So the next time he wandered into my camp I stood my ground. First I banged some pots together. That didn't seem to work. Then I tossed some rocks his way, with one actually hitting him on the ass. So he charged me. The bear ran full tilt toward me, stopping dead only a few feet away to beat the ground in front of him with his front paws, while snapping and growling. It was a classic fake charge (of course, I didn't know that at the time). I responded by waving my arms up in the air and yelling obscenities at him. Surprisingly the bear backed down. In fact he ran away. Before leaving the site, however, he did manage to swat the bow of my canoe with his paw a few times (I have out-of-focus photos to proove it). He definitely was a bear with an attitude.

By telling my nuisance bear stories I'm in no way trying to explain what to do if a bear comes into camp. Bears are very similar to humans - they are incredibly unpredictable. Each occurrence is different and your reaction depends on the particular circumstance. You should first consider how the encounter came about. If a curious bear wanders into camp then try a mild aggression technique (don't throw anything at the bear). Or if the bear knowingly approaches you and attacks, then definitely be combative. It's the only way out. But if you happen upon each other while on the trail or portage then its far better to calmly back off and give the animal its space. Worse yet, if you surprise a mother bear, especially if she has cubs, never show aggression or she'll fight back.

There are items that have proven effective in protecting yourself against bear attacks. Bear bangers and pepper spray are the most commonly used. The bangers are considered the less harmful and safest deterrent. But they're obviously not as effective as pepper spray if the bear attacks. You'll probably never use the can of bear spray, but having it packed along gives you some sense of security. However, it can also make a bad situation worse. I've heard of people blasting at a bear and then have the spray blow right back into their face. There's also the story about the tripper in Jasper National Park that sprayed his tent with the pepper, thinking it would keep bears away. That night a grizzly wandered into his camp, and finding the actual spray tasty, ate his tent and accidentally injured the occupant in the process.

This is the most asked question. It's also the most difficult to answer. There are just too many variables to consider. But in a perfect scenario this is what you should do:

First, never run. Running away may trigger a prey/predator response, and a bear can outrun the best Olympian athlete. You could climb a tree, that's if one is nearby and easy to climb, and it's not a black bear or a young grizzly; they can climb trees better than you can. It's best to stay put and assess the situation. If you stay put the bear may eventually move on and the encounter becomes an enjoyable experience.

But what if it charges you instead?

Well, in most circumstances the bear is faking it. But you wouldn't know the difference between a real charge and a pretend one. So the next move is to sex it before you make your move. If it's a male bear than a mild aggression technique may work (making lots of noise and standing erect, waving your arms in air). It's rare but male bears have been known to stalk and hunt humans for food and the only way to protect yourself against a predacious bear is to fight back. Really fight back. However, if you try to be aggressive with a female, especially one with cubs, then she is most likely to attack in defense. You're best to play dead. Lie face down with your hands wrapped around your neck to protect your vital organs and spread your legs somewhat apart to help anchor yourself in case the bear attempts to flip you over. 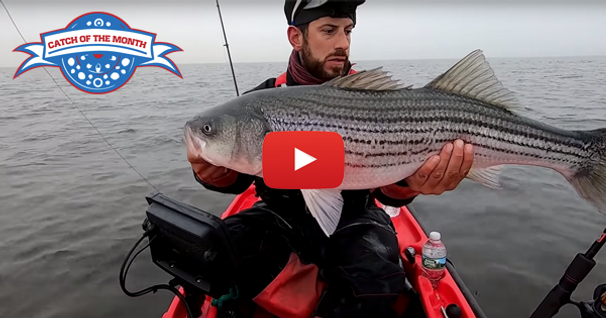 "Really amazing day. All on the jig and plastic combo. Slow rolling off the bottom on fish marks… Paddleboarding with A Cat

Meet Logan. A 10-month-old bengal cat who loves to go out hunting for new adventures. Cat-turing every… 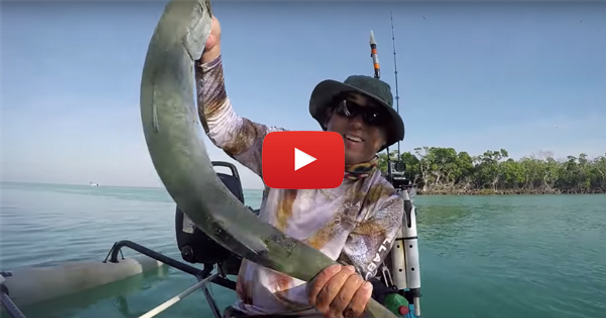 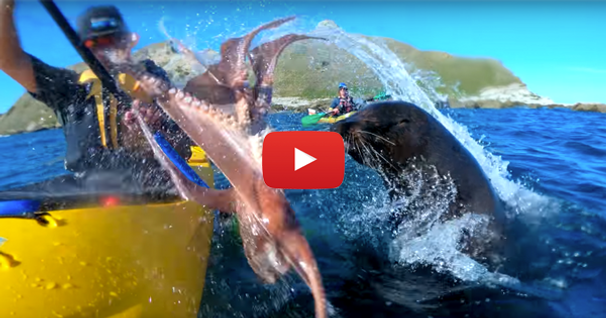 Definitely a one-in-a-billion moment! Watch as a kayaker gets slapped in the face with a octopus by a…