The first paddle was probably created to move a raft across water so deep a push pole couldn’t reach the bottom. As boats evolved into different craft so too did paddles. Many early Pacific Rim kayakers used a single bladed paddle - a more efficient design when kneeling in the cockpit straddling a bedroll as they did. Others, across the entire Arctic region all the way to Greenland also created double bladed paddles to propel their kayaks. Modern paddlers can still choose that traditional style as well as several other shapes that have evolved with technology and paddling styles. Each is designed to provide a more efficient and powerful means of propelling a kayak through the water.

What is the optimum shape for a kayak paddle?

Today's market offerings include everything from long flat panels to odd-shapes with flowing curves. Several factors affect the ultimate shape of a particular paddle offered by any of the dozens of manufacturers around the world. Opinions as to that ultimate shape tend to be based on a culmination of collective and interrelated aspects of paddle function and design.

Envision an imaginary line down the center of the paddle shaft extending down through the middle of the blade, from heel to tip. If the blade sections on both sides of the line are an exact mirror image of the other, the blade is symmetric - two equal halves. Conversely, if one side of the line has a larger surface area than the other, it's an asymmetric blade.

Symmetric blades tend to be the choice of whitewater paddlers as well as those who prefer a high stroke while touring. Other design factors (keep on reading) will affect performance and power issues. 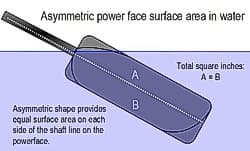 Those who tend to use a more leisurely low stroke tend to use the very common asymmetric kayak blade. In fact, it's because of that lower angle to the water that a blade has two different shapes but results in the same overall surface area. When the blade enters the water at the proper angle, the asymmetry enables both halves of the power face to have the same total area of contact with the water.

Basically a shorter, wider paddle blade is used for more forceful, more powerful strokes – preferred for those who like speed or the critical bite of the paddle when needed quickly. The longer, narrower blade works for slower, easier-paced strokes. The "average" touring paddle blade might be at least 18-20" long and about 6" wide. Typically those who want speed and quick power might choose the same blade design, only significantly shorter and noticeably wider by several inches.

In both instances cited about, the focus has been solely on the relationship of the total surface area and how it is distributed relative to the shaft line along the length of the power face. But wait, there's still more to consider.

A flat paddle blade is exactly that – flat across the surface. It may have a longitudinal curve or slight sweep to the blade, but the surface from edge to edge is flat – usually. An exception is the addition of a rib down the center of an otherwise flat-paneled power face. The rib is there to guide the flow of water towards the outer edges of the blade – while reducing flutter. Some paddle makers also use that rib to add strength to the blade.

If you look from the tip of a paddle back down lengthwise along its power face and notice that both sides angle slightly down and away from the shaft line out towards the outer edges – you are looking at a dihedral blade.

Dihedral paddles have two plane/power faces. This lateral angle – that can vary by manufacturer – is designed to guide the water flow across the surface of the blade. By doing so it can reduce flutter in the paddle by directing that flow along the face to the outer edge. Like flat blades, a dihedral blade may also have a curve along its length.

Adding a sweep to the paddle blade, either along the axis of the blade (curve) or through the cross-section (spoon) affects the bite a paddle has in the water. The curve is similar to the shape of a swimmer's hand during the power stroke. The curve is designed to provide an early catch during the beginning of the stroke. Because it's curved, the blade should be pulled from the water early to prevent the curve from lifting water instead of pushing it. The curve can continue throughout the entire blade evenly or can be applied more towards the tip.

A spooned blade is shaped – like a spoon. If a spoon paddle were laid down flat with its power face upward, the lengthwise edge would actually enable you to add water without it flowing back off as it would on a "curved" blade.

The most recognizable variation of a spoon blade is the "wing" design most often used by racers. Its scoop-like design has a rounded edge that provides lift along the backside – similar to an airplane's wing. It requires solid torso twist strokes and the path of the blade through the water is angled out away from the boat and longer than the conventional high racing stroke used with other paddles.

These are the long, narrow blades, typically on a shorter, thicker shaft than those found on a "normal" blade. A low-angle stroke style is most often associated with these blades. They aren't as well suited for quick, powerful strokes but rather for more finesse and endurance.

A cross-section of both blades reveals a convex form. The Aleutian form differs most noticeably by the addition of a rib along the power face (the Greenland style has a totally flat surface in cross-section).

The most commonly available paddle on the market is a combination of most of the features mentioned, modified by each manufacturer to some degree. Referred to as "Euro" style blades, these are most often asymmetric with a degree of curve, sometimes with a slight dihedral built in. Within that general Euro style are variations in width/length/curvature. Conversely, some prefer a flat/curved symmetric blade for their own paddling needs.

A very important factor in the discussion of blade shapes is the use of proper paddling form and stroke execution. Improper grip or inadequate power may cause a paddle to flutter whereas a good, firm stroke may prevent any paddle from fluttering or twisting. The more a paddle catches and holds water during the stroke, the more important it maybe to end your stroke sequence with a shorter exit point (to avoid lifting/scooping up water with the blade).

Here are some of the pros, cons and special characteristics of these paddle blade shape variables:

As a paddler begins the stroke, water builds up on the surface, becomes agitated and exerts pressure unevenly across the surface of the blade. The blade begins to twist or flutter as that water flows off the power face, especially as that angle of the blade in the water changes. That flutter/twisting tends to be more prominent in wider blades as they are more responsive to changes in that angle. Adding a rib down the center of a flat blade or making a slight dihedral cross-section is designed to reduce or eliminate this disturbance. A firm and proper stroke style can often reduce or eliminate T/F altogether.

All things being equal, a larger surface is going to push more water. Since a vertical/high stroke generally utilizes a shorter paddle, that blade is normally shorter but wider than are preferred for the longer, touring, horizontal stroke. The need/use of power in the high stroke is more efficiently and effectively achieved with a broader, shorter blade.

It's not a matter so much of which blade produces more power (a 20"L x 6"W and a 14"L x 8.5"W have nearly the exact same surface area of 120 sq. inches) but how effectively you can draw on that power for acceleration or control and how efficiently you can maintain it. Oftentimes the shorter/wider blades are used with a faster cadence/stroke rate.

Symmetry - Symmetric blades work best with a high, vertical stroke where both power faces attack the water evenly. When paddled at low angles, the disproportion of the blade surface in the water from above and below the shaft line means uneven force and flow of water across the surface.
Asymmetry - The asymmetric blade anticipates that angle and is shaped accordingly – and therefore most often used as the choice of touring paddlers. It, too, can vary in size thereby offering a more powerful face when desired. An asymmetric blade will "catch" the water sooner on the entry phase of a stroke thereby increasing the efficiency of the paddle.
The Wing – Almost exclusively used for racing/high performance paddling. It demands a specific form of stroke that requires proper torso twist. Some paddling techniques can be executed with the spoon-shaped wing if the backside of the blade is used. This is common with some highly curved and/or spoon paddles as well.

How It All Shapes Up

It's apparent that there are several factors to consider, based upon differing opinions and preferences, as to what is the "best" paddle shape. Manufacturers vary in offering excellent options within their product line regarding shapes for kayak paddle blades.

As with all gear, your best bet is to attend a demo' day and try out different shapes and sizes - remembering that it's all based upon the presumption that proper paddling technique will be your foundation for getting an accurate "feel" for your gear. This overview offers general and basic factors that have gone into designing paddle shapes. Once you have paddle length and shape figured out, you can decide which material you should consider. Many factors come into play there as well.

Be safe; Have fun!

Tom Watson is an avid sea kayaker and freelance writer. For more of Tom's paddling tips and gear reviews go to his website: www.wavetameradventures.com He has written 2 books, "Kids Gone Paddlin" and "How to Think Like A Survivor" that are available on Amazon.com. 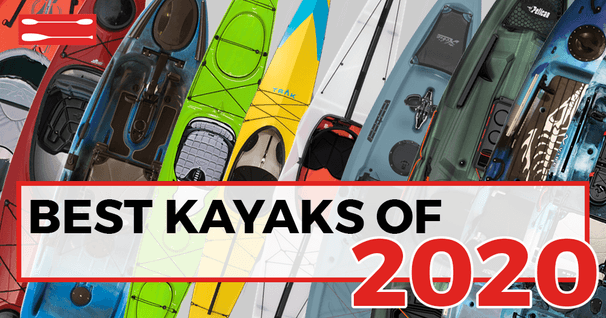 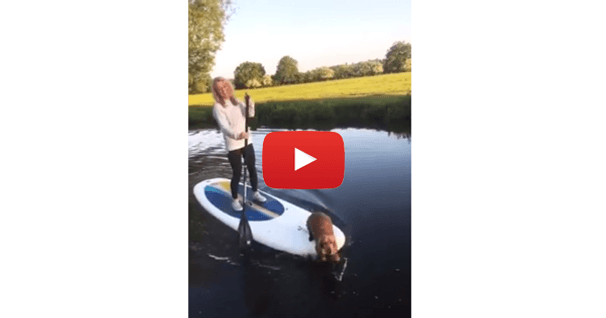 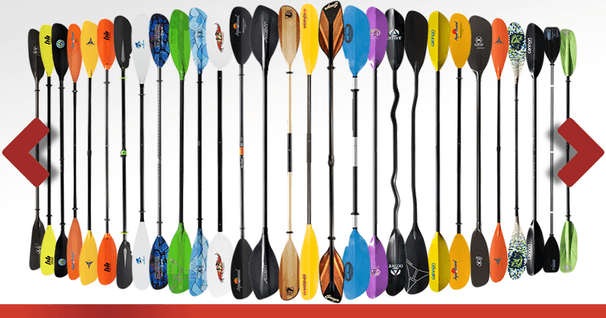