I know, it’s the New Year and perhaps I should discuss new ways to eat better, drink better and feel better. Which is exactly what I intend to do with the support of the most popular starch food on earth: potatoes! Because, contrary to what all those Atkins/Miami Vice/South Beach diet aficionados contend, only good things come from this humble tuber.

For starters, potatoes contain a fair amount of Vitamin A and C when cooked properly, lots of fibers, some potassium, magnesium and iron too, especially in the skin. At 100 calories for a medium-sized potato it is also a very good quality slow-release source of carbohydrates, which is something paddlers need to keep going. The problem with potatoes doesn’t come from the potato itself but rather, like pasta, from the butter, oil, sour cream, cheese and gravy that are too often used to embellish them. The good news is: it’s easy to avoid excess fat content with many simple recipes that can be prepared on a camp burner, a barbecue or a camp fire. Potatoes also keep very well during a trip, as long as they are protected from moisture and humidity, which they clearly hate.

The history behind the tuber

Per capita, the Irish are the biggest potato consumers on the planet. It’s no surprise that they have all sorts of great recipes to accommodate this food staple and that they add them to any braised meat, soup or stew. They also have a lot of nice idiomatic sayings to express their love for potatoes, my favorite being “It’s easy to halve the potato where there’s love”.

Its origins are rooted in South America, namely the Andean Plateau, where indigenous people from Peru harvested them twice a year. The oldest specimen was discovered in southern Chili and is said to be 11,000 years old. Wild potatoes, called papas, were picked and dried at the time of the Inca Empire and stacked to provide a reliable food supply in case of famine. For a long time, potatoes were named batatas (from the Arabic) until king Louis XVI from France decided to change their name into something more related to his passion for gardening: "pommes de terre", or "apples of the earth" if you will.

Potatoes have come a long way before they reached our North American tables. At first, in many countries such as Russia they were considered good only to feed cattle. The Spaniards thought they were a food that came from the devil, just like eggplants and tomatoes. That was before Antoine-Auguste Parmentier arrived on the scene. As a prisoner in Prussia during the Seven Year War this French agronomist and food expert was appalled to realize that peasants fed the vegetable that saved his life during the long war to their pigs. When he returned home, he convinced King Louis XVI to grow them as a quality staple that would later easily supply the poor with food in times of famine and when wheat prices skyrocketed, which happened often in Europe at the time.

Potatoes made their way to North America with the first British settlers but it wasn’t until the first wave of Irish-Scottish immigrants in the late 19th century that the white fleshed tuber became really popular. Today, many varieties of potatoes are grown throughout the world and all great chefs use them to create fabulous recipes. Home cooks could not imagine life without them either. How about campers and paddlers? Well, potatoes can add a lot of versatility to their menu and they are a breeze to prepare.

There are as many as 300 varieties of potatoes, and 100 of them are widely grown in Europe and America. Some are a bit waxy, which make them good for salads or sautés, others have a higher starch content that make them perfect candidates for mashed potatoes. Some are at their best when cooked whole, with their peel (which is delicious with a tiny bit of butter). This method of cooking them is the best way to get the most nutrients because they are always found in the peel or close to it. Just make sure you wash them thoroughly. Here are some of the most widely know varieties: the Russet, the Idaho, the Yukon Gold, all perfect for mashing of for cooking whole, with the skin; the Ratte or fingerling, a French firm variety that’s long and thin and that chefs love to serve whole; Red Pontiac, Purple Peruvian and many other red varieties. New potatoes have a low starch content, which make them superb for salad.

In a large piece of aluminum foil, drizzle half the olive oil. Cut the potatoes in thin slices. Do the same with the onion. Alternate potato and onion slices on the foil, sprinkle with crushed garlic, herbs, salt and pepper and olive oil. Fold the foil to make a packet and put on a grill over a camp fire or a barbecue. Cook for 20-30 minutes, turning the packet frequently.

In a skillet, sauté all fresh vegetables in olive oil over medium heat for 5-8 minutes. Add Balsamic vinegar, can of diced tomatoes and dry sausage. Bring to a boil, add salt, pepper and marjoram, reduce heat and simmer five more minutes. 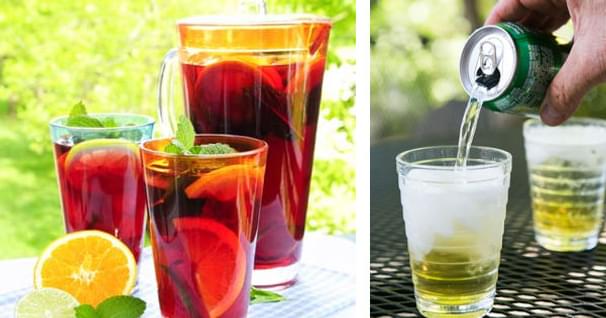