Philip Edward Island is just south of Killarney Park in Ontario Canada and is another proposed extension of the park through the Living Legacy Program. It's a fantastic 5-7 day route and has been rated by a number of leading paddlers as one of the top ten destinations in North America. 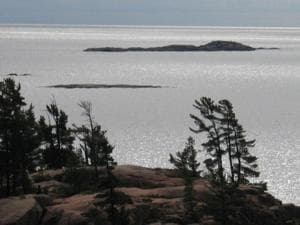 The trip circumnavigates the 50 kilometers of island shoreline, starting out from either the marina in the town of Killarney or Chikanishing River access point. You can paddle around the island in either direction but the preferred way is counter-clockwise due to the prevailing winds. The exposed southern shoreline is also the most scenic and many paddlers simply go to Beaverstone Bay and back. But the north shore is still well worth a visit. It has a protective channel, Collins Inlet, and is an absolute gem for historians; it seems everyone in Canadian history has paddled through here.

Now it was my turn to paddle through the history.

I stopped to have a late lunch near the old lumber town of Collins Inlet, established at the mouth of the Mahzenazing River in 1868. Fire destroyed the mill in 1918, causing Collins Inlet's decline. Other companies still worked out of the mill for a few more years, rafting gigantic booms of logs through to the inlet. The wood it produced was used mainly for fence pickets, laths for plastering, and wooden boxes for packaging vegetables, fruit and fish. Large three-masted schooners, including some that had been built right at the mill, shipped the lumber south of Georgian Bay to such Lake Huron ports as Sarnia and Goderich. But soon it all ended. Now what remains on site is a rustic fishing camp titled Mahzenazing River Lodge. The lumber businesses eventually vanished from the site and moved on. A few iron rings are still embedded in the hard granite along the shore, where they once held the booms firmly against the rough water being blown in from the Bay. All the buildings on the original site have either been burned to the ground or swallowed up by the neighboring bush; docks for the wooden schooners and steel-hulled steamships have rotted along the shoreline; and the rings of the axe and screech of the saw have long been silent.

Collins Inlet is still a well-traveled passage way, used now by powerboats and yachts, and it can get quite busy at times. But then again, I have a feeling this protective channel has always been busy. Explorers, Jesuits and voyageurs used it to escape the heavy winds of the Bay, just as current boaters do today; and long before that the natives used the route extensively, even painting ochre symbols on the rocks to mark their stay here. Located just to the west of the Collins Inlet site is a pictograph of a canoe with one of its occupants crowned with a cross, indicating a priest. 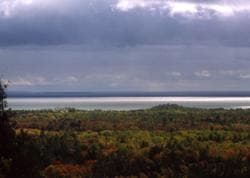 In 1615, explorer Samuel de Champlain traveled this way and met an Algonquin tribe, later to be called the Ottawa. Tribe members were drying blueberries for the long winter ahead. The women wore breechcloths and the men's naked bodies were adorned with colorful paint and tattoos inscribed permanently into their skin by slash scars infected by charcoal and dye. Their ears and nostrils were decorated with beads, and their hair was gathered up on their heads in a unique manner. Champlain noted that the Indians' elegant hairstyle outdid the grand styles worn by gentlemen of the French court, and decided to call these Indians Cheveux-Releves ("the Indians with their hair raised up").

Another reference of natives in the area is that of Father Vinmont. In his testimony Jesuit Relations for 1640, the Father stated, "To the south of these [the Beaver Indians, who lived at or near modern Beaverstone] is an island in the freshwater sea [Lake Huron] about thirty leagues long, inhabited by the Outaouan. These are people who have come from the nation of the 'raised hair.' "

Throughout the entire Killarney region there are countless references of European missionaries coming in contact with the local natives, all for the purpose of desperately trying to change the belief system of these "poor savages" and to spread the word of God. In 1649, while Father Jean de Brebeuf and Father Gabriel Lalemant were being tortured and killed by the Iroquois, Lalemant's cousin, Father Poncet, the first missionary on Manitoulin Island, was wintering on the island. A letter he wrote on May 18 clearly states his feelings regarding his appointment: "It was God's will to make me do penance for my sins during nigh on the seven months among these savages, companions of the life I was leading, and grant me the consolation of sending some of them to heaven…" 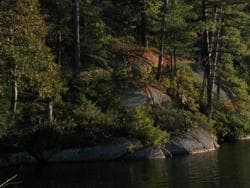 Father Louis Andre of Sault Ste. Marie was the next Jesuit placed in charge of the faith of the Natives, after the migration of Huron and when the Ottawa split up into three separate tribes: the Kiskagons the Sinegos, and the Keenoshe, or Pikes.

He spoke of his experiences in Jesuit Relations: "I know not what my predecessors may have suffered in their country, but I proved well enough by experience how far one can go without dying of hunger. My daily allowance of food was not given me until after sunset; and if there were any bad morsel it was so small in quantity as hardly to suffice f sustaining life. To such straits [we] were reduced by ill success in fishing and hunting that year."

Father Andre survived by eating his moccasins and bindings of his books, and continued educating his "savages" with the word of God.

Now here I was, camped along Collins Inlet, once a safe passage for natives, voyageurs and steamship captains. Tonight, it was a haven for one lonely kayaker, a kayaker who was finally content, away from danger and left to consider my paddle mark on history. 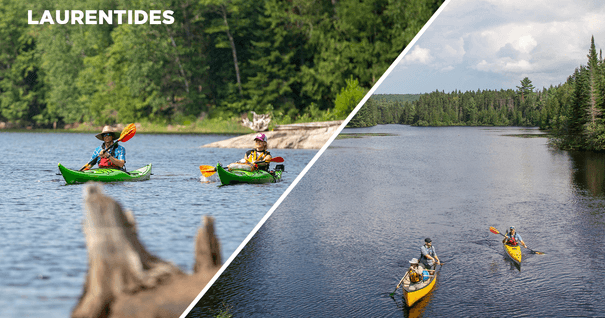