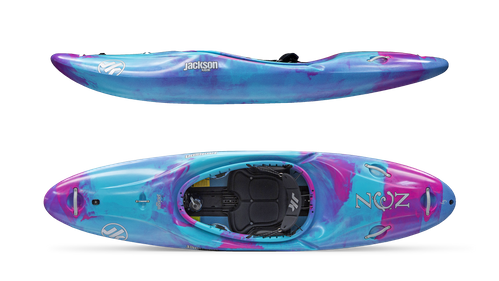 The Zen Medium is a kayak brought to you by Jackson Kayak. Read Zen Medium reviews or submit your own review to share with the paddling community. Check out a few other kayak recommendations below or explore all kayaks to find the perfect one for you!

Read and submit reviews for the Zen Medium.

Read reviews for the Zen Medium by Jackson Kayak as submitted by your fellow paddlers. All of the reviews are created and written by paddlers like you, so be sure to submit your own review and be part of the community!

I started whitewater kayaking last summer after sea kayaking for a couple of years. My initial experience with WW kayaks was frustrating as I was learning. They spin so easily and it is difficult to get them up to any speed. Finally I took a WW clinic and the instructor suggested a Zen. So the Zen was the boat where I started to learn to paddle WW.

It was a revelation to use the Zen after I had tried some other models. It tracks a bit more readily than other boats that I tried and it feels more stable in wave trains. It eddy turns and peels out very naturally, so I was able to learn to S turn in a Zen very easily. Ferrying was a skill that I had to work at a bit, but once I discovered that the Zen would slide across the current with the correct angle, I was able to get the hang of it. I can't say that I compared every skill with different Kayaks, in truth I learned a lot of the skills for the first time in a Zen. Before I hads tried the Zen, I was very uncomfortable in WW.

I learned to roll in both the Zen and my Tsunami 165. The Zen takes less energy to roll than the larger sea boat, but is also easier to flip. If you roll both boats 10 times in a short period of time, the Zen will leave you fairly comfortable and the Tsunami will probably make you a bit tired. I struggle with my roll in fast current, but in flat water both boats are very consistent to roll.

The bottom line is that I think the Zen is a great boat for learning and its stability makes it a good choice for big water. I like the handling and I can say that it helped me get more comfortable in WW. I love this boat and am considering buying one.

I wish that they had incorporated a stern hatch or a day hatch, or both. The stern is a large volume that you need to fill with inflatable bags, it would be great to be able to use that space like you can in a sea kayak. If they had a hatch, I would probably be rating this boat five stars.