A favorite touring PFD, stripped down to the essentials for lightweight day-tripping. Bright colors are easy to spot on the water. The Trident is the Tsunami 140 of PFDs; durable, well-equipped, comfortable all day on the water... and it won't break the bank. Now there's no reason to settle for less.

Read reviews for the Trident by MTI Adventurewear as submitted by your fellow paddlers. All of the reviews are created and written by paddlers like you, so be sure to submit your own review and be part of the community!

The MTI Trident in the…

The MTI Trident in the bright green color is one of your best options if you are looking for a PFD that is highly visible and has the pockets and attachment points needed for effective storage and deployment of safety gear. (If you want more information on visibility, do an Internet search using “On-Water Visibility Study” as the search term.) Fluorescent green is the most visible color to the human eye, but sadly the paddle sports industry sadly seems reluctant to encompass it in PFD designs intended for humans (there are good options in PFDs for dogs).

I settled on the Trident after looking for a PFD that combined fluorescent green with the ability to hold a whistle, rescue knife, flashlight, and marine VHF radio in readily-deployed positions. After purchase, I tested the Trident by going into deep water on a nearby river and was impressed by the degree of buoyancy. It kept me vertical and floated high enough to keep the radio out of the water. I was able to swim easily. I find the Trident to be comfortable and do not even notice it while paddling my kayak.

The positive features include:

The bright green is a highly visible color, especially in dim light and under overcast skies.

The cargo pockets are well placed and easily contain a decent whistle, an effective rescue knife, and a flashlight. My knife is on a lanyard which I attach to the clip in one of the pockets. I keep my whistle on a shorter lanyard attached to one of the loops on the shoulders. I keep the whistle in the cargo pocket but leave the zipper open about two inches so that the whistle can be immediately deployed by pulling on the lanyard. I keep a flashlight in the other cargo pocket on a lanyard that it tied to the elastic tether that was formerly used to hold the supplied whistle (which I got rid of).

The loops on the shoulders are well placed and useful for attaching items such as a marine VHF radio. Neither the radio nor the antenna will bump in your face when attached to a loop. More importantly, you can readily hear broadcasts and speak into the microphone without having to let go of your paddle. Some companies make PFDs with pockets to hold a radio. The problem is that you may not hear other broadcasts and will probably have to use both hands to deploy and transmit on the radio.

The daisy chain on the back of the PFD is a great idea. I could see where it would be useful to deploy a clip-on light at night.

Here is where I think the Trident could be improved.

The mesh on the cargo pockets obscures part of the green fabric and thus somewhat diminishes the visibility of the PFD. The front of the PFD contains a lot of unimpeded green fabric so it is still quite visible, but the mesh fabric contributes nothing to the design and it would be better to have solid fabric throughout.

The supplied whistle is okay but not great. A high volume whistle such as a Windstorm or a Fox 40 would be better.

It would be better to have clips in both cargo pockets instead of one pocket. Lanyards are important because if you drop something when you are in the water, it is likely going to be lost. 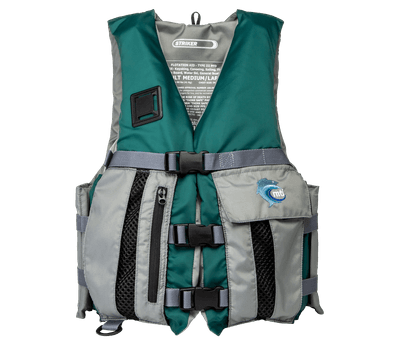 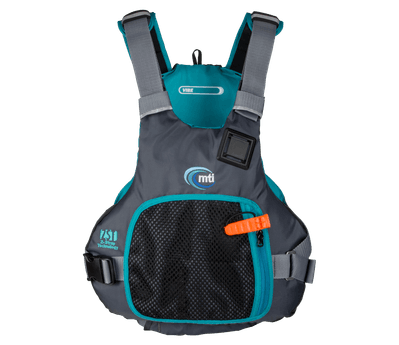 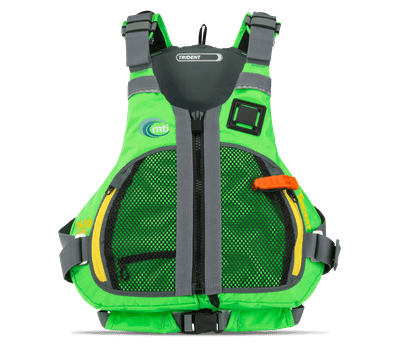 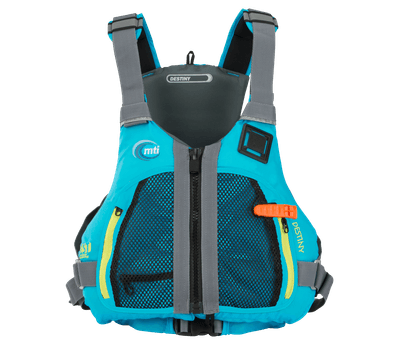