The XT-15 is a kayak brought to you by Pakboats/ScanSport, Inc.. Read XT-15 reviews or submit your own review to share with the paddling community. Check out a few other kayak recommendations below or explore all kayaks to find the perfect one for you!

Read and submit reviews for the XT-15.

Read reviews for the XT-15 by Pakboats/ScanSport, Inc. as submitted by your fellow paddlers. All of the reviews are created and written by paddlers like you, so be sure to submit your own review and be part of the community!

Submitted by: willowleaf on 8/17/2010
We just picked up an XT-15 for my boyfriend so we would both have folding kayaks to take on trips in his two-seater plane. I've been a Feathercraft owner for 8 years, currently on my third, a Wisper, so I am a fan of quality folders and well familiar with their assembly and performance. This Pakboat gets the thumbs up from me. Assembly is very simple and does not require the "kayak yoga" of half wriggling inside the skin that is required to put together my Wisper. I love the Pakboat's removable deck -- expect it will be great for packing for trips. The kayak is very comfortable with the generous suspended seat, inflatable thigh support and wraparound backband. He's 5' 9". around 185 # and was able to enter the cockpit butt first and swing in his legs easily. The boat paddles impressively. It tracks well and is very responsive to paddle or leaned turns. It's faster than you would expect it to be per its appearance. He was able to keep up with me in my Feathercraft with ease and I can usually keep pace with most "hard" boaters.

It's tougher than it looks and bounced off some boulders we encountered on a Class I section of the Susquehanna were we took it on it's maiden voyage without any visible damage. At 39 pounds it was easy to load and haul. By all reports from folks I've talked to that own this boat, it is competent even in open ocean and having seen how it is built and how it performs I would not hesitate to take it out in such waters.

I expect we will have many great trips with this boat and would highly recommend it for anyone seeking an affordable, versatile and highly portable boat.

I purchased this Kayak about…

Submitted by: paddler233485 on 2/16/2010
I purchased this Kayak about a year ago, and I have used it frequently last summer. I saw it at a kayak sport fair in Madison WI. What impressed me was the ladder type frame which makes an extremely stiff frame, and the comfortable seat as well as the roomy cockpit which allows me to get in seat first. I have size 13 feet which was often a problem with other Kayaks but here I have plenty of room.

The assembly takes normally about 30 minutes but with some more practice it may be cut down to 20 minutes, I did not always disassemble it if I did not go far I strapped it onto the roof rack. Paddling this Kayak is easy and relaxed with a decent turn of speed. The primary and secondary stability is very good and one can easily eat lunch or take pictures without problems. So far I did not do any extended trips but I think there is a lot of room for gear. The deck comes off therefore it is easy to load the gear. There are no hatches but the back of the deck can be removed without problems for access to the gear that may be needed during the day. For small items I have a deck bag that doubles as a paddle float. I did some capsize and reentry drills which worked fine with the paddle float the kayak floats relatively high after capsize, so there is not too much water to pump out.

I used it mainly on the Hudson River and so far I did not encounter any conditions that would have been a problem. Tracking is very good even without a rudder which can be retrofitted now. The boat comes without any foot rest but I purchased the inflatable footrest that they sell which is comfortable and can be easily adjusted underway. There is no painter and no perimeter deck line but there are some D-rings to attach shock cord. I added some more to attach my deck bag.

The quality of the hull material and the deck is good and the frame is well made, I use some foam insulation tubing from Home depot on the keel tube in order to protect the skin although the boat came with a reinforced keel-strip but where the plastic clips are attached to the aluminum there is a weak spot because the plastic is sticking out . The holes in the aluminum tubing that hold the frames will probably enlarge over time, I think there should be some bushings to prevent that. There are some sharp corners on the seat that press into the inflatable sponsons, I have patches of gorilla tape installed in these areas to prevent chaffing. The boat is not too heavy and the Bag while not exactly a joy to lug around is manageable. Packing the skin is not too easy because it does not want to fold in a way that it fits into the bag, at least I have not found a good way yet.

Overall I am happy with this boat it works well is not too expensive, and with 45Lbs not too heavy. According to the Seakayaker review it is for protected water whatever that means, but I think in capable hands this boat can go anywhere were other boats can go. Of course I don't drag it over rocks and barnacles but I would not do that with any boat. I think with a little care it can last a long time and if there is a hole you can put some tape and later patch it permanently. I'm not giving it a 10 because there is nothing out there that is perfect, a seven reflects the shortcomings and the fact that there are better folders out there but they also cost a lot more. 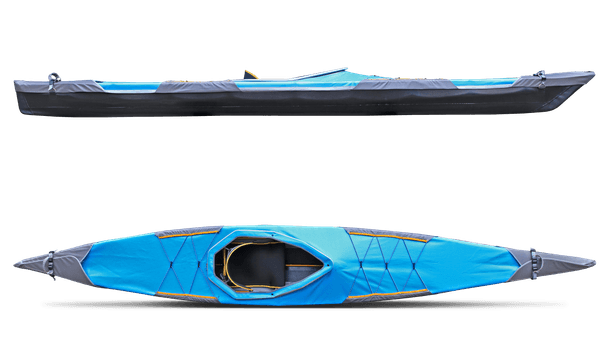 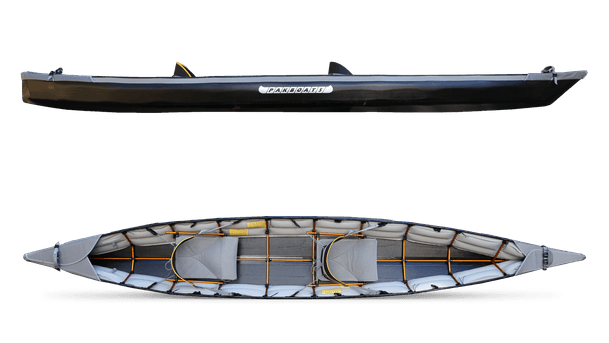 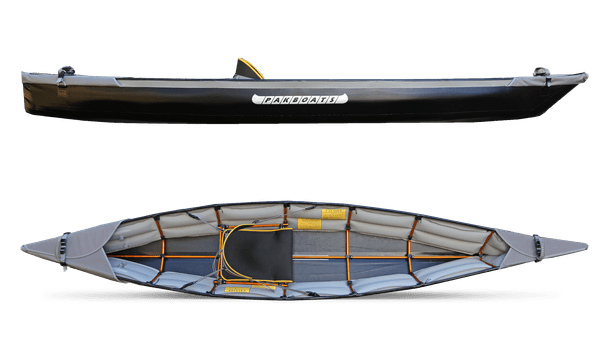