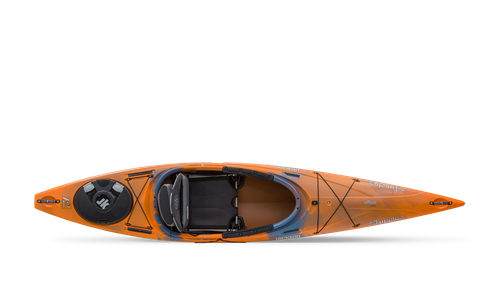 The Tupelo 12 is a kayak brought to you by Jackson Kayak. Read Tupelo 12 reviews or submit your own review to share with the paddling community. Check out a few other kayak recommendations below or explore all kayaks to find the perfect one for you!

Read and submit reviews for the Tupelo 12.

Read reviews for the Tupelo 12 by Jackson Kayak as submitted by your fellow paddlers. All of the reviews are created and written by paddlers like you, so be sure to submit your own review and be part of the community!

I usual don't write reviews ,however the negatives almost discourage me from buying this kayak i'm so glad i bought anyways, This thing is fast and glides effortlessly ,i prefer it over my touring.AS far as tracking goes it tracks great . IT a very responsive yak it responds on how you paddle.Only negative is the colors can use some improvements and the location of the bottle holder is in bad spot.Hope this help.

This boat is really stable.…

This boat is really stable. Easy to get in and out of but in the water it's not so good. Bought mainly as a recreational kayak, as I don't do much fishing, but lots of bird and critter watching, Once across the lake, it's ok but it's a bit of a dog getting there. It can't compared to my Pungo120UL. Tracking is poor, it tends to the right, no matter the water/wind conditions and it labors through the water, even when calm. There is an annoying squeak from the seat and when assembling the boat, they were pretty sloppy with the glue as it's smeared on the hull in many places. I thought the boat would be a good choice but was wrong. I like that it weighs only 40 pounds, but it's not a paddlers dream.

Like some other reviews I have posted, this one is based on testing rather than owning one. I really like the looks. It is very lightweight and has some great colors. This kayak will turn heads. The seat was one of the few that my wife found comfortable, and it is removable. I like the easy access of the hinged hatch covers, instead of rubber caps. There are gear tracks mounted on all side and the front middle for GoPro, rod and cup holders. I'm not sure I would make use of any of these, since I am a recreational paddler. Now, here is the bad (as I see it), therefore why I did not purchase one for myself.

My wife and I tried the Tupelo LT three different times at 3 different places, along with the Tupelo 12 and 12.5. We came to the same consensus. These models don't track real well and are slower than what we were expecting. I believe it is a result of the tri-hull design, which makes it very stable. The outside hulls don't run parallel with the center, thus doesn't glide as nice as other boats we've tested. The wind and current pushes this kayak around and we found ourselves having to constantly correct its course. I was also disappoint in that it doesn't have a front bulkhead. Instead, for support is a block of foam between your legs, which doesn't allow you to stuff a small cooler up front. No cup holder is provided without you having to buy an aftermarket holder to mount on one of the gear tracks. They do include a plastic water bottle that is bungeed to the foam block. It is not easy to get to and difficult to slide in and out of two very tight bungees. This setup will not hold any other container very well, other than theirs. That means you would have to empty our drinks into their plastic bottle. The sides of the cockpit are a bit flimsy, if you are going to use them to lift yourself up and out. Not as bad as the Hurricane Santee, but not as sturdy as Eddyline and other composite kayaks such as Current Designs or Swift.

I really wanted to like this kayak, since it is made in America, so good looking and reasonably priced for a lightweight.