Experience full power reverse with the MirageDrive 180 with Kick-Up Turbo Fins. Logs, kelp? No problem. Our patented Kick-Up Fins “kick back” when contact is made with under water obstacles. Keep a half-dozen rods rigged and ready in the four standard horizontal and two molded-in rod holders for the ultimate kayak fishing adventure. Confidently stand and fire cast after cast. Equipped with the Guardian Transducer Shield, your transducer is protected on impact and retracts for transport, while providing side scanning for optimal fishfinder performance. The ultra comfortable, elevated Vantage ST seat makes it easy to stay out on the water all day and move around the boat. The Pro Angler 12 includes a retractable skeg for improved course-keeping, as well as the innovative 12-sided Hobie H-Rail for superior flexibility in accessory rigging. ($4,499 USD MSRP for Camo)

Where to Buy the Mirage® Pro Angler 12

Read reviews for the Mirage® Pro Angler 12 by Hobie as submitted by your fellow paddlers. All of the reviews are created and written by paddlers like you, so be sure to submit your own review and be part of the community!

I have had a few sit in and…

I have had a few sit in and sit on kayaks. I decided I wanted a real fishing kayak. I talked with a friend that has a Hobie peddle drive and I took his 10ft outback out and I liked having my hands free to fish as well as how much propulsion I got for the effort in the Hobie peddle drive kayak. I did a.lot of research and found that the PA 12 was perfect for me. It is awesome. I have fished ponds lakes and the Chesapeake bay as well as the Delaware Bay. It's a super stable platform with lots of extras available. I will have it for a long time to come. I've fished 5 states and have more planned.

I give this kayak 4 stars.…

Submitted by: paddler838421 on 7/29/2020
I give this kayak 4 stars. This Hobie is a 2019 model. I enjoy fishing from it more than my sit in kayak. It is a very stable boat, one can very easily stand up. The 180 mirage propels the boat very easy. The seat is something that can't be beat. It is very comfortable, there are adjustments for the back, seat and lumbar. There are a few features of this kayak that should be mentioned. There is a small storage area in the rear that is only good for small containers. The weight is around 140 lbs, not something that you could just throw on the top of your car or truck. Overall it was a good purchase.
5

It is an excellent product…

It is an excellent product would recommend it to everyone.

It's just right for all your…

It's just right for all your stuff

I like to fish on small lakes and this kayak is ideal for that purpose.

A friend of mine has one of…

A friend of mine has one of these and let me borrow it last week to go fishing. Absolutely loved it and will be buying one for myself in the near future.

This is a light weight boat…

This is a light weight boat that I can easily lift on top of the car. It is fully functional for sport and fishing with everything I need well within arms reach. It's rally the perfect boat for all ages. Thank you for making this boat absolutely perfect.

Submitted by: paddler236636 on 1/26/2016
Purchased the 2015 competition version end of 2014. Very technical boat, cannot call it a Kayak. It's solid. Really solid. Its broad beam gives a great sense of stability. Don't be fooled however as I have over-reached and rolled it. It's not really suited to off shore use in rough weather or in the surf or maybe I am just not game. Whatever.

Mine came with the Lowrance 5 Chirp fish finder which is an OK unit, a live bait tank which I have yet to use, stake out pole which is useful for the rivers, drift anchor which is ok,anchor trolley which is invaluable and the tackle boxes which has a great storage set up at your feet.

The most important feature is the Mirage Drive. I had an up market performance version fitted. It's fast. I have had it up to 8kph according to the GPS. And its really effortless at cruising speed. Its greatest advantage is that it leaves your hands free while manoeuvring to cast, un-snare your anchor or just drift and cast under control.
The Vantage seat is also very cool with easy 2 level height adjustment and infinite easily achieved seat and back positioning.

Would I buy this boat again? Maybe. It's very expensive new at around 6k fully kitted with roof racks and other stuff fitted. However there are some great 2nd hand bargains around that I have seen complete with trailers.

Am I sorry I bought it? No way. It's great and I love every minute I am in it. It more than just a fishing platform it an whole of body and mind experience to use. You do need a trailer if your by yourself as its around 55kg fully kitted.
Overall an hopefully unemotional 9/10

After having spent several…

Submitted by: paddler236578 on 10/25/2015
After having spent several months researching kayaks, it has been my privilege to own the Pro Angler 12.
I fish a lake in Northern Alberta called Wabamun. Indian for "mirror". This lake is a world class fishery. Monster pike, that of 5 feet and 40 pounds have been caught. Three feet plus and 20 pounds, very common. A home for the "gators" of Alberta.

This kayak is amazingly stable in winds of 40 km plus. Great storage for every weather and fishing need. I have a 2013 model with the turbo fins. You should be 6 feet tall to use the Mirage system with ease. Easy to load and unload in the back of my pick up. One final note, I have caught trophy pike with this kayak with ease and confidence.

A reason why they are expensive is because they are worth every dollar. Ordering a sail for this up coming summer. Thank you Hobie !!

Traded in my Hobbie Outback…

Submitted by: paddler236181 on 4/13/2015
Traded in my Hobbie Outback for the roomier heavier Pro Angler. I have mixed feelings about it. Number 1 it is heavy....very heavy. It is sluggish when doing hard fast turns..just doesn't happen.

If you are under six feet tall this kayak is not for you. The seat is spaced too far from the pedals.
The pedal linkage doesn't feel snug. Sometimes the linkage locks on the pedal drive fail to hold the drive shaft. Also, if a large wave or boat wake is coming at you it is sometimes difficult to get the yak to respond in time. I have been swamped three times so far.

It is roomy, the seat is somewhat comfortable and I like the side rails

My husband and I bought Pro…

Submitted by: vdaneen on 8/8/2014
My husband and I bought Pro Angler yaks 4 months ago. We have saltwater fished every weekend since purchase. Tons of room! Yak has built in ice chest, 4 rod storage, hidden tackle boxes and most comfy seat ever. The H bar is another major plus.

I can stand and fish even when wind is kicking. We also have the micro power pole. I can anchor and cast in seconds.

I can honestly say this is the best purchase we ever made!!

First off, I own a Mirage…

Submitted by: guest-paddler on 4/2/2014
First off, I own a Mirage Sport, Mirage Outback, and my last purchase the Mirage Pro Angler 12. this to qualify my responce to JBM comments [2012-08-31 post] on the Mirage drive system. Once I figured out the quirks of putting the drive in correctly I have had no problems. This is my fault, didn't read the directions. I have been using a Hobie in the Yatch Harbor & ocean for 3 years, and the drive systems have held out flawlessy. I got out every day for a few hours. So I suppose JBM either works for a competing Kayak Co. or he didn't read the directions like me.

My only suggestions for Hobie concerning the Pro Angler 12 are:

Even with my suggestions, I give Hobie Mirage systems a solid 10!
5

A friend of mine purchased a…

Submitted by: paddler234808 on 10/8/2012
A friend of mine purchased a Pro Angler 12 from Lancaster County Marine about 2 months ago. Just recently I had a chance to test it out...I was a skeptic at first that the mirage drive was going to really perform the way its advertised...NOT ANYMORE! Hobie really has a fantastic concept!

My buddy fishes just about every week in his Pro Angler 12 and raves about how many fish he catches and the places he can get into. All I can say is that I'm now a believer in the Hobies and my friend is 100% satisfied with his purchase. If you are looking for a very comfortable fishing kayak that is very stable, the Pro Angler 12 is the boat! Check out this great video that he showed me.
www.youtube.com/watch?v=bjdk9aHh9j8
Lancaster County Marine definitely knows their boats! Don't hesitate to buy one of these boats, you wont regret it! 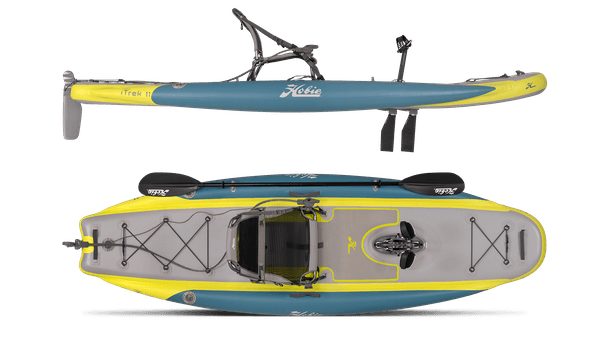 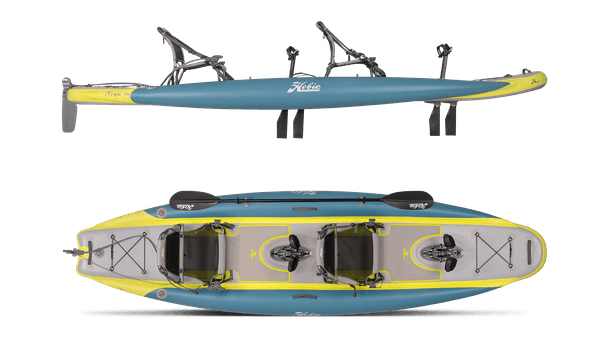 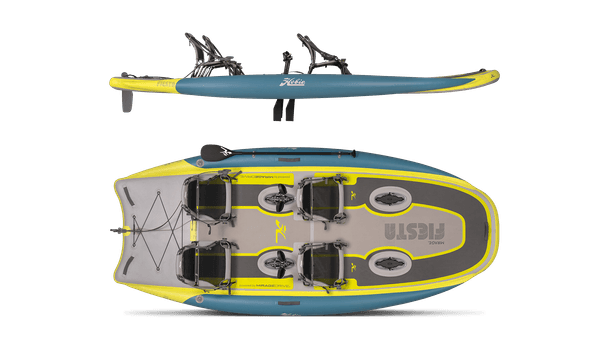