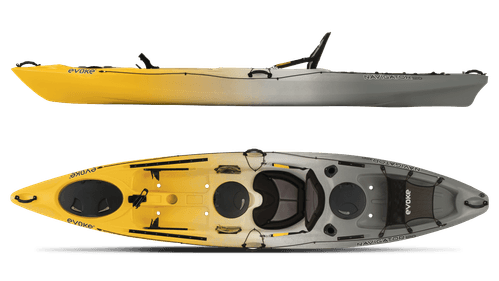 Read and submit reviews for the Navigator 120.

Read reviews for the Navigator 120 by Evoke Kayaks as submitted by your fellow paddlers. All of the reviews are created and written by paddlers like you, so be sure to submit your own review and be part of the community!

Unfortunately, the company that produced these kayaks is no longer in business. In 2020, I started searching for a second kayak, as i wanted one suitable for fishing. I found the Navigator 120 and it sounded perfect, but since the company was no longer in business and there was a kayak shortage, I couldnt find one brand new. I consider myself lucky that i was able to find a used one near me. I absolutely love it and think it's a shame the company is no longer around. I havent had any problems with any of the storage compartments leaking, but I havent been in very rough water and i use dry boxes in addition, anyway. I love the track system. I havent found any current (2021) kayaks that have track rails behind the seat like the Navigator has, and they're perfect for my rail-mounted light because it's out of the way of casting my rod. The hull has scupper holes and you can easily by scupper plugs if desired - not sure why a reviewer was freaking out about water in the boat...For me, it's been a perfect fishing kayak.

It fills with an insane…

Submitted by: paddler834874 on 7/30/2020
It fills with an insane amount of water its brand new I was only on it about an hour an ditch accumulated so much water I had to immediately get to someone's dock in fear of it sinking so I've been emailing the company evoke about it for 3 weeks now I tried their email I tried the phone number I tried instagram i tried facebook i cant get one single response from these people either they all quit they are on strike or they are out of business either way this is by far the worst customer experience ive ever dealt with it's worse than worse I'd rather have someone be rude to me I'm being ghosted by evoke kayaks do not waste your time with this company absolute garbage
5

My son and I both have them…

Submitted by: paddler816358 on 7/7/2020
My son and I both have them new this year. We had other kayaks that weren’t even close in comparison. We both love them! Easy maneuverability, and very stable. They are heavier than some, but that makes them tough. They track so well. My wife and daughter can’t keep up if we are on a fun float down a river. All my buddies just can’t get over all the room we have.
2

I bought this kayak a couple…

I bought this kayak a couple of years ago. The dry hull lids leaked like sieves...awful design. I complained to the dealer...instead of giving me my money back they gave me a brand new one replaced saying the one I had must have been defective.

NOPE! The brand new one (now a year old) leaks just as badly as the first one. And to boot I noticed last weekend the seat rivets (that secure the seat down to the kayak) are coming apart, so the seat is now about to completely come loose.

I also do not like the bungie system on the back of the kayak. Instead of a bungie cord system that actually stretches this has some sort of other deal that absolutely sucks for holding a cooler down.

Do not get this kayak... especially if you float rivers/streams where water is going to splash up a lot and leak into the dry hulls.

Only positive I would give this boat is it is very light therefore maneuverable in the water....and the dry hulls despite leaking do have a lot of space for storage if you are doing an overnight float for more supplies. So for that I'll give it 2 stars instead of one.

I was going to modify the hulls with a sealant myself....but last weekend when I saw that seat coming apart I said i was done. Going to buy a new kayak today. If it weren't for the hulls leaking and the seat this would be a pretty good kayak.

Was looking for a fishing…

Was looking for a fishing kayak and found this at a small town outdoor sports show. Wanted to buy from a local dealer and not from a big box store. It was a gift to myself from my late father who was an avid paddler.

It has everything I wanted to start with in a fishing kayak. Very nice seat with good back support and easily adjustable. Boat is very easy to handle in windy conditions and tracks well. I've really enjoyed fishing from this kayak. A bit on the heavy side at 68 lbs but that's what helps keep it stable for fishing. It's still fairly easy to manage.

Quality seems very good for it's price range. The hatches are nice but not waterproof. Additional protection is needed for anything you want to keep dry. It's a good platform to start from with many options available for personalization. Very happy with my choice of this kayak.

Submitted by: JJJimmy on 9/7/2015
My 2015 Evoke Paddlesports Discover 120 is a very nice SOT angler's kayak. Now called the Navigator 120, it is outfitted with some nice accessories not normally found at this price, especially the latched storage hatches (large!) with inner bags. The YakAttack rails and adjustable foot pads are nice, too. A little heavier than others, but manageable on a short carry. Evoke is doing a fine job getting into kayaks, giving you more for your money than most.
Navigator 120
by Evoke Kayaks
Submit Your Review