Read and submit reviews for the MidWing Paddle.

Read reviews for the MidWing Paddle by Epic Kayaks Inc. as submitted by your fellow paddlers. All of the reviews are created and written by paddlers like you, so be sure to submit your own review and be part of the community!

I have had my Epic mid wing…

Submitted by: dmodifiedstock on 4/27/2016
I have had my Epic mid wing paddle for over 4 years now. I alternate using it on my four different boats, under varying wind and current conditions. It performs very well with a minimum amount of getting used to it initially and a little touch up on technique between outings with it. I like the angle of attack with it as not overly high for my style of paddling. It does drip a lot of water into the cockpit though; I need to put some drip catchers on the shaft, just never got around to it. I love the latitude of increasing and decreasing the overall shaft length to accommodate the different width boats I paddle. It is very light, very strong and fun to paddle.
5

I had a large wing paddle,…

Submitted by: paddler234875 on 1/11/2013
I had a large wing paddle, but thought it was too big for me. When I was out paddling one day, I spied a paddler with an Epic wing paddle. He offered to let me try it out, but it was too big and moved way too much water for me. I would have been exhausted within an hour. I went to the Epic website and they have a paddle calculator. I took a chance and ordered what they suggested. I purchased a carbon length lock small mid wing paddle.

It's easy, fast and just right for my size and style of paddling. I had a Seven2 paddle, and I have now use it as a spare. I love my Epic small mid wing. It is very well made and easy to adjust.

Not sure why there are only…

Submitted by: kocho on 8/8/2008
Not sure why there are only two reviews of this paddle here so I'll add mine - I think this is one of the most popular wings out there, at least from what I've seen on the water from my buddies.

Before buying I tried the three versions of the paddle - carbon with stiff shaft and with flexible shaft as well as the hybrid version. Which one of the two full carbon versions you pick depends on your preference for a stiffer and stronger or more flexible and lighter but weaker shaft. The hybrid is a little over $100 or so cheaper and a little heavier with different material on the blade.

I had the chance to compare the older non-Chinese hybrid Epic with the current China-made one and there are some subtle differences. The fabric pattern on the blade is different and the new blade seems to be a smidgen heavier than the old one (or the paddle shaft on the new one can be lighter – not sure which it is) but that can be a paddle to paddle variation. If I balance on my finger, the center of gravity is different b/w the two with the older one being more towards the handle and the new one - more towards the blade: either the blade is heavier or the shaft lighter on the new one to cause this difference. But by very little - less than 1/2 inch or so, so the weight/distribution is very similar. Don't know if the different fabric pattern has any bearing on the strength of the blade or not.

Before I made my choice, I compared the three types of Epic wings against each other and then the hybrid to two other wing paddles - Lendal Kinetic Wing and the BobCat wing paddle. They each have their personalities and strengths. The Lendal is incredibly buoyant and a little easier to do sculling with but a little less powerful - probably just below the power of the Epic mid-wing; it is also, depending on shaft used, heavier or similar to the Epic in weight and has a softer initial catch and probably the smoothest overall in the water. The BobCat is the cheapest by a long shot, is more powerful than the Epic or the Lendal, and is the heaviest of the bunch, but built of the least quality shaft and lock. After several hours of use, my paddling partner and I picked the Epic as the best compromise due to light weight and decent handling for forward stroke use mostly, the BobCat for best price power and handling in the water (but heavy after a while), and the Lendal for versatility buoyancy and portability. So, depending on your priorities, either of these three may be your best choice. The Epic seems to have the least twist in the blade of these three based on the fact that the Lendal and the BobCat both pull more sideways, but I have no numbers on either.

For me, the Epic hybrid signature was the best compromise. I should have probably bought the full carbon to save some weight, but the hybrid is light enough as it is and I needed the extra cash more than I needed the extra weight savings.

Using the mid-wing paddle with a boat as slow as the likes of the WS Tempest 170 or slower would be a bit too taxing over longer distances or while trying to paddle fast. If you have one of these, I'd suggest the smaller blade. For faster boats the mid-wing seems to be a good size that allows me to maintain good cadence over longer distances. The larger yet wings would only be adequate for very fast boats and racing IMO.

The paddle is a wet one, lifting a lot of water at the exit but at the same time it seems efficient and well behaved throughout the entire stroke. After paddling the wing it feels very weird to go back to a regular paddle (seems mushy in the water compared to the wing) and I miss the catch and efficiency of the wing and go back to it as soon as conditions allow.

The only reason I did not give it a 10 is that I don't seem to be able to have a dry and quiet stroke from start to finish, which I can have with some other paddles. But that is probably not really a problem as the paddle seems to work very well otherwise. The locking mechanism is easy to adjust as long as it is not over-tightened (only a little effort is needed).

Lastly, the benefit of a wing paddle for mostly forward stroke type of paddling can't be understated - it taught me proper stroke much faster than would have been possible with my regular paddle and this skill translates back to using a regular paddle too.

I received the hybrid as a…

Submitted by: Thankful on 9/13/2006
I received the hybrid as a Christmas gift. Yes, my wife really loves me. Great paddle. Little-to-no learning curve. A buddy used it in the middle of an 18 mile paddle and instantly fell in love with it. He bought one shortly afterwards. Great catch with no flutter, so no loss of energy. Every stroke counts. A must have for racing or that unstable boat.
5

Submitted by: paddler235058 on 12/16/2005
Surprisingly light, and VERY easy to learn to use. Performs low braces well, too, unlike other wings. Lengthlock can get too tight occasionally.
MidWing Paddle
by Epic Kayaks Inc.
Submit Your Review

Similar Paddles for You: 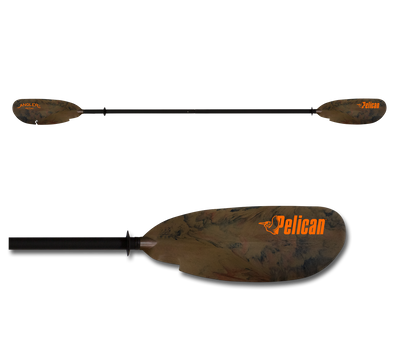 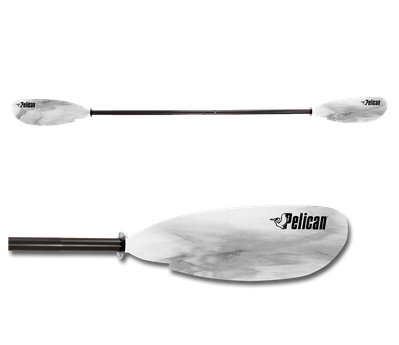