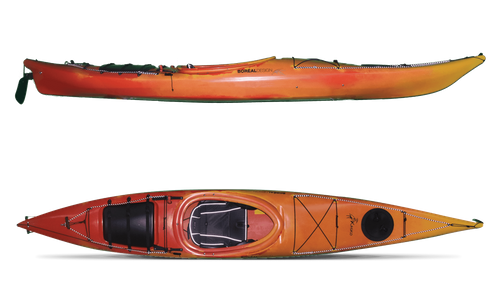 The Kasko is a kayak brought to you by Boreal Design. Read Kasko reviews or submit your own review to share with the paddling community. Check out a few other kayak recommendations below or explore all kayaks to find the perfect one for you!

Read and submit reviews for the Kasko.

Read reviews for the Kasko by Boreal Design as submitted by your fellow paddlers. All of the reviews are created and written by paddlers like you, so be sure to submit your own review and be part of the community!

Submitted by: fishadr on 7/4/2015
Just returned from solo 10 day trip on the World Heritage Rideau Canal. My Kasko which I have had for 5 years met all my expectations. I carried camping, gear, food and personal gear with with no problems. The Kasko has always performed well in big water or quite creeks in all kinds of weather conditions. Don't use rudder often but useful in crosswinds and when required to kick the kayak around in heavy water. Hats off to Boreal for a great kayak.
4

My Girl and I bought each a…

Submitted by: jnfc on 7/2/2015
My Girl and I bought each a Kasko from Boreal Design last summer end. After shopping for a few models from different company, our choices were stop with the Kasko. The reason why is simply cause it is a 13 footer, a well design shape that cut through the waves very easy, enough feet height coz I wear #12. The weight is OK.

The only reason I give an 8/10 is because I would have preferred the rudder to completely twist up than just half way and the front deck hatch has only one latch, two will be better (third year model does have 2)

Over all I love the Kasko and I have used it in open sea and it responded very well though it's 13 ft.
I will recommend it.

I'm new to the kayak world. I…

Submitted by: paddler235631 on 7/1/2014
I'm new to the kayak world. I wanted a stable kayak that could be responsive and fun to paddle. I have been visiting kayak shops for 2 months and decided after that to take the next step and try some. I have tried 6 different kayaks that I could rent: Necky Manitou Sport, Wilderness systems Pungo 120, Delta 12.10, Elie Strait 140, Boreal Design Ookpik and Kasko. I must say my choice was on the Delta which is a very good boat until I tried the Kasko....What a great kayak!!

The reason I was first hooked on the Delta (aside that it's a great kayak) was its light weight (41 lbs). I was a bit reluctant to try the Kasko because of its 56lbs. I was soooo wrong. On water the Kasko is so much faster despite the 15 lbs difference. Effortless Paddling, very stable and responsive (quick accelerations). The rudder lets you turn on a dime.

Very experienced kayakers that know the Kasko confirmed it was a great Kayak with a crusing speed (not top speed) identical to most 17', even if it's only 13'.

If you're looking for a easy kayak to paddle and do not want to be exhausted paddling a bathtub that doesn't move, this might be the kayak you're looking for. What else can I say, I love it, perfect for my size at 5'7", if you're taller you might consider its wider brother the Ookpik (24").
Just try it! and see by yourself.

I have owned my Borreal Kasko…

Submitted by: Marlin on 8/6/2013
I have owned my Borreal Kasko for about 5 years now and it has severed me well. I have used in in every thing from shallow creeks to large open water. At 13' and a width of 23 1/2" it is very maneuverable, but still tracks well. There is enough room in the cockpit to paddle with your shoes on and the foot pegs are well made and easy to use. It has front and rear sealed hatch's that are a plus when carrying extra gear. My Kasko didn't come with a rudder and I have not needed one. You could not as much more from a plastic rec. touring kayak at 13'
5

Yup, this kayak rules. I can…

Submitted by: paddler233085 on 4/28/2009
Yup, this kayak rules. I can take it in some pretty good chop and it even surfs a little, but the best is just taking one or two strokes and drifting silently close to shore and scaring up herons (my apologies, they usually just look at me). My only complaint is the front compartment lets a bit of water in if it's wavy out, but no more than an inch or so and it's sealed off from my feet so after kayaking I usually take a towel and mop it up. The rear compartment is dry dry dry though. Also the rudder sticks sometimes. whatever, just knock it down with your paddle. I'm still giving it a 10. Plus it looks nice. No funny boxes sticking out of it... just smooth nice curves. go kasko. I want another one.
4

I love this boat. It is…

Submitted by: guest-paddler on 7/26/2007
I love this boat. It is beautiful, tracks well for its size and is just plain easy.
5

I am a relatively new kayaker…

Submitted by: paddler231790 on 9/11/2006
I am a relatively new kayaker but am hooked on the sport, perhaps because of my Kasko! I bought a rudderless boat with one bulkhead and hatch and am delighted with the fit, responsiveness and stability. I'm finding there are lots of Fridays this time of year when the Ottawa river beckons so off we go and my legs and back still feel great after 25km. The seat is comfortable and my husband made me a rudder which makes handling in chop much easier. I would highly recommend this boat.
4

I purchased the Kasko as a…

Submitted by: jpbfrompa on 7/12/2006
I purchased the Kasko as a second boat to my primary boat which is an Impex Mystic. I wanted this boat mainly for creeks and rivers and maybe an occassional lake trip or to take along a friend. I am extremely pleased with this boat. This boat weighs approximately 47 lbs and measures 13'2" from bow to stern and is 23 3/4" wide with a rather small cockpit for a rec hybrid touring yak. I am 5' 6" and 150 lbs and it is a good fit for me. If you need a larger cockpit, the sister boat is the Oopik. My boat is outfitted with bow and stern bulkheads, very nice hatches and adequate deck rigging. It does not have a rudder but is molded to accept one but if you have a decent skill level you can lean this boat easily to turn it. It is highly manueverable but seems more like a longer boat in performance. It tracks pretty well for a 13' boat but due to it's higher profile(14"deep) and no drop-down skeg it will need some correction in stiff wind or surf. I have used this boat in all types of water and I am thoroughly pleased with it. The design with hard chines and the narrow width of this boat, along with great craftsmanship make this a keeper. The seat and backrest is comfortable but the cable support for the backrest is a little tacky. If this boat had a drop-down skeg I would rate it a 10 but overall this is one fine boat.
4

First, I was immediately…

Submitted by: tlc10598 on 2/6/2006
First, I was immediately struck by the fine worksmanship, good finish, and great hatches on my Kasco; there is a striking difference between these on my boat and on my son's Carolina 13.5. I tried both the Oopik and the Kasco, and for me, 5'8" and 160 pounds, with short legs, the Kasco was by far the better fit. In fact the fit is excellent, helping to make this a very responsive kayak. It seems to have an excellent balance between initial and secondary stability, leans easily several degrees but difficult to lean beyond that. Very manueverable, turns well. These factors are also apparent in contrast to the Perception Carolina 13.5.Mine was an end of season former demo; it came with no rudder but so far I don't think it needs one; it did come with two bulkheads which I do consider important. In sum, far more boat than most of the pure rec boats, but small and light enough for one person to car top it easily. I my well pleased with the choice, no way would I trade; my son likes mine but still prefers his, which is as it should be.
5

Wow! What a beautiful boat. I…

Submitted by: horrocks007 on 5/23/2005
Wow! What a beautiful boat. I own a Necky Zoar Sport, and I am fairly new to Kayaking. I bought this Kayak for my girlfriend so she could join me in this awesome sport. I got her kayak on sale for $900.00 and it came with two bulkheads and a rudder.

I think this kayak is perfect for someone who is new to the sport of kayaking. The boat is very maneuverable, not tipsy, but is slower than my Necky Zoar.

The Boreal Kasko rudder system is simple, yet effective which I see as an advantage. The Hatches on the bulkheads are designed much better than any kayak I've seen in the below $1000.00 range. The seat, though not fancy with air cushion gizmos, cup holders, and triple adjustment systems is actually quite nice. The height of the back cushion is perfect for wearing your life jacket, and the seat is firm but comfy.

This kayak is beautiful, and all parts, design and shape has convinced me that Boreal Design did not cut corners in making this craft. I will heavily consider this manufacturer when it comes time to upgrade my out of my Necky Zoar Sport.