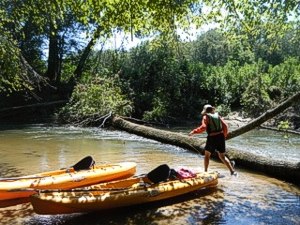 Several weeks before my spouse and I had canoed the Yadkin River from above the 268 bridge at Ferguson to Marley's Ford Park and also wanted to run the upstream section from Patterson to Ferguson as we thought it would be more interesting.

We put in at the Yadkin Valley Community Park in Caldwell County where these is a good access point and parking. We decided to take our kayaks as we knew they would be more maneuverable, though we had never taken them on a river before. The distance was a about 9 miles and took us 4 hours.

There are no serious rapids though numerous riffles and some ledges. There were a few sharp bends that were problematic because of the numerous trees and brush that were down in or overhung the river.

Between the first 268 bridge you reach and the Grandin Road bridge there was large Tulip Poplar tree completely blocking the stream. Fortunately the flow is slow in this area and a sand bank on the left against the trunk allowed us to easily pull the kayaks over to the other side and proceed. Shortly after that at the Grandin Road bridge another large tree was down and wedged against the pillars of the bridge itself. There was room to pull the boats over the rocks and limbs on the right base of the bridge.

There were no other complete blocks, but many where there was only a relatively narrow gap to shoot to get between fallen trees, overhanging limbs and the like. We each ended up going over at least once. 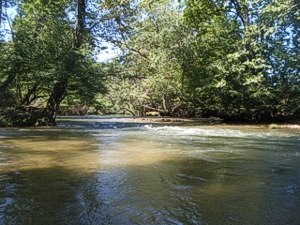 The banks are relatively high with large overhanging trees over most of the route. There were also many dense groves of bamboo along the banks. The river winds through farming country, cattle are seen from time to time with their accompanying smells.

There are a large number of old abandoned vehicles along the banks many with trees growing out of windows, engine compartments and trunks. Old tires are also common on the banks and on the river bottom.

The access at Ferguson is not marked on the river and a large tree had fallen just downstream from it obscuring sight of the 268 bridge. This resulted in our going by it. The current was too strong to paddle back so we ended up getting out and "walking" the boats back - no simple task.

There is a gravel parking lot at this access point.

We found this an exhilarating and somewhat exhausting trip. It might be a little less exciting with a lower water level and with some more experience on our part.

No accommodations, there is a toilet facility at the Yadkin Valley Community Park

There is some description of this route in CAROLINA WHITEWATER by Bob Benner, 1987, though the park and the Ferguson access points did not exist at the time the book was written. In the book the upstream put-in that he lists is at the 268 bridge near the junction of Buffalo Creek with the river which is just a few hundred yards above the park.