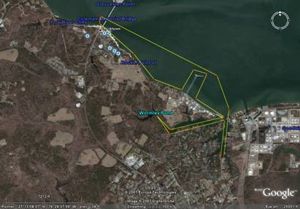 Wormley Creek is an urban jewel on the York-James Peninsula of Virginia. You might find that hard to believe when I tell you that, in addition to the expected homes and piers, it even includes a marina with a power plant looming over it. But its wide yet protected arms have enormous trees climbing steep hills, relatively undeveloped shorelines, and access to the York River. Its an easy few hour paddle for beginners, or a Plan B destination for questionable weather days like today.

The arms were cut during recent ice ages when sea level was much lower. As the York River rose to its current stand, the small, many-branched valleys flooded and filled with sediments, recounting in miniature the birth of the Chesapeake Bay. Presently fed by feeble streams from a watershed of less than 5 square miles, it seems destined to become a meadow with small creeks running through it.

Mid-morning at the Wormley Creek Landing, the weather was cool with mostly cloudy skies. Water visibility was only about 1, with salinity about half that of the ocean. It was 4 hours before low tide, a compromise between accessing the deepest nooks of the creek and beachcombing. The mild north wind was almost unnoticeable in the short, narrow arms. The oak trees were bare, but for once I could appreciate their massive trunks and branches. The only green was in the few pine trees, the understory holly trees, and the beachball-sized clusters of mistletoe. It seemed a good omen that I immediately met another kayaker who was also playing hooky.

At the end of the main branch, I temporarily exited the choppy inlet to check the mood of the York River. Over two miles wide at this point, she was cold and steely-gray under overcast skies. Snoring, not roaring. That was good news, since it meant I could later paddle upriver to Yorktown.

Back in the western branch of Wormley Creek, I crept along the wooded northern shore owned by the Coast Guard. A fresh water impoundment supplies the deer and other wildlife which share this peninsula with the Coasties. Squirrels made a racket. A small bird searched under every flake of bark for insects. A woodpecker tapped away. In the shallow water and exposed coquina benches, modern oyster shells were interspersed with ancient slipper shells still bearing traces of small spines. The boats at the Coast Guard marina look clean and rugged. Even the smallest have dual 225 hp engines.

Great blue herons, kingfishers, and extremely shy, back-and-white ducks were everywhere. The left hand side changes from sparse residential to National Historical Park. Deer are usually emboldened by overcast skies, but none were evident today. Nearing the end of the west branch, it became too shallow to continue so I turned around. When the tide is up, you can continue to the end, jam your kayak in the rip-rap, and climb up to the road and admire Wormley Pond. Its a nice place to have lunch, but watch the tide so you dont return to find your kayak resting on a mud flat.

On the way back, the dropping tide revealed just how narrow the navigational channel is near the mouth of the western arm. Shorebirds sought food and rest on small islands of muddy sand. A pair of bald eagles didnt seem bothered to view the world from trees above the Coast Guard pistol range. 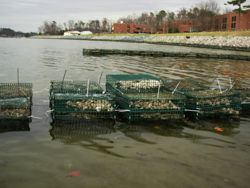 On re-entering the York River, I was delighted to find the wind had died down further. The water was much clearer, with 3-4 visibility. If you could see this well in summer, it would be positively creepy with medium-sized cow-nosed rays, but theyd gone south for the winter. Perhaps in late spring theres a time window with good ray-watching, before the plankton has built up enough to reduce the visibility. In front of the Coast Guard station, oyster farmers in a shallow-draft powerboat were setting out baskets of the small bivalves. The cages keep the rays from crunching up the young shellfish in their plate-like teeth.

Redbeard sponge and the yellowish-green sea lettuce were visible on the rocks and pilings, both colors of an intensity to melt your heart. Sea squirts are also common but are easy to miss in their homely yellow-greyness. Scores of small fossil snail shells, surprisingly intact, rocked in the clear water near shore. I also found a large fossil snail which looked like a lightbulb; surprisingly minor changes in the whorls over a few million years could evolve it into our familiar knobbed whelk. One cliff contained massive beds of those small spiny slipper shells. In another cliff, layers of sand have been fused into sheets by iron minerals leached from above.

I saw a few small sea nettles. The common wisdom is that this swimmers bane disappears in winter, leaving the water to the more robust-looking lions mane jellyfish. In the peak nettle season around July, there is some potential for getting irritating stings from broken tentacles dripping off your paddle. In early fall, the nettles begin to fade away, but parts of the York River are then carpeted with 2 bells of the relatively innocuous moon jellies. If any place had more jellies, you could walk on water. Its a very odd feeling to unexpectedly hit the submerged bell of a large moon jelly with your paddle.

After passing some isolated beaches, a small municipal park, and Cornwalliss Cave, I drew near Yorktowns Riverwalk Landing. It was close to low tide, but the opposing current was strong. The York is a real river, not just some tidally flushed arm of the Chesapeake Bay, and in the last mile it had narrowed by a factor of 2. On an outgoing tide, I dont think many of us could paddle upriver past Yorktown.

The concrete piers at the Riverwalk Landing are 3 higher than water level, so virtually unusable for kayaks. A short distance upriver, almost under the bridge, is a small beach. I was getting chilled and sorely tempted to stop at the Yorktown Pub for a hot meal. But the day was running short, so I paddled upstream, looped around one of the massive bridge piers, and let the current take me downstream.

It was nice to have the river to myself. This area can be an absolute zoo in the summer between the power boats, jet skies, and the 105 sailing schooner Alliance. The occasional warship passes under the bridge as well, after on- or off-loading ordnance at the Naval Weapons Station. In particular, keep your eyes open for the occasional submarine running on the surface. You would be shocked how close a 100 m long submarine can approach before you notice it. The captain of a billion dollar vessel negotiating a narrow channel between bridge piers, with strong currents and rapidly changing salinity, has enough to worry about without bathtub toys getting in the way.

Probably the highest cliffs on the York River are just downriver from Yorktown. With attractive homes perched on top, they made a nice photo in the reddening light. Dusk was approaching, and a line of pelicans winged up the York River to their roost. There is nothing more ungainly looking than a waddling pelican, but in flight they are fluid perfection. That warmed my heart, but not my feet, which didnt feel like they belonged to me anymore. Wading now and then in short, neoprene booties had finally sucked all the calories out of my feet. The way feet are braced in an SOT exacerbates this by reducing circulation. 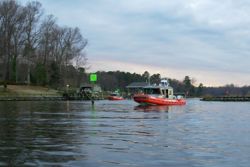 As I re-entered Wormley Creek, a string of small Coast Guard training boats were streaming down the narrow channel, making a hard left turn to enter the York River. It was clearly a training mission, since each enclosed cabin contained an instructor with a student at the helm. Excited to finally see them in motion, I stopped to take pictures. Unfortunately, while the camera was to my face, the boatwash gently sucked me into the channel on a collision course with the last vessel. The Coast Guard motto is semper paratus, which means We expect civilians to do stupid things. (Actually it means, Always Ready, which is much the same thing.) The instructor simply leaned to speak into the students ear, and they circled for another try. I was so grateful they didnt stop to yell at me.

Back at the landing, I was clumsy from the cold. This was my first serious winter SOT trip, and for what I was wearing today, this trip was one hour too many. I couldnt break apart my paddles to save my life. I had a vision of driving home with paddles sticking out the window, looking like I had Harvey the Rabbit in the back seat. But after 10 minutes of running the car heater, I was able to break the paddles apart, finish packing, and drive home with dignity for a long, hot shower.

This trip is of significant local interest for wildlife, scenery, and fossils. The described trip was 12 miles in 6.5 hours. There were lots of birds today, and on past visits in summer I have seen deer, otters, rays, terrapins, and lots of jumping fish. A friend of a friend was startled to see a large cobia swim under his kayak. The Wormley Creek section is rated easy, and is one of several York County water trails. I judge the Yorktown visit to be for intermediate kayakers due to open water, strong tides, and extreme power boat traffic in season. You have to feel comfortable swinging a quarter mile out into the river to circumvent the Coast Guard pier.

After this trip I bought knee-length neoprene waders which reduce water exchanges during wading. They also provide the better arch support and tread that was missing in my cheap, starter booties. I may not be able to give them up when summer returns. A large thermos of hot, sweet tea is also on the list for my next winter kayaking trip.

No services at the bare-bones Wormley Creek boat landing. At the present time there is parking for 5-10 cars with trailers. York County plans to renovate the facilities. A vandal-resistant porta-potty would be appreciated by boaters as well as the residents of the surrounding neighborhood.

From Rt. 17 in York County, VA, the landing is not far but its certainly hidden. Even locals will never stumble upon it without a map. Take the road on either side of the county library (Battle Road or Harrod Lane). Turn right on Old York Hampton Highway, then bear left to Hornsbyville Road. Very soon turn left on Wormley Creek Road. Drive slowly, watch the hairpin turn, and admire the castle-like home along the way. When you get to a gravel parking lot which at the time of writing looks like a former Superfund site, youre there.

The York County, VA, map of water trails is available at:
http://www.yorkcounty.gov/parksandrec/images/h2otrail.pdf

Historic Yorktown information can be gleaned from:
http://www.yorkcounty.gov/tourism/

Aerial photos and topo maps from http://www.terraserver.microsoft.com were useful, as were virtual tours via Google Earth.

The CBOFS wind forecast for the Chesapeake Bay area can be found at http://tidesandcurrents.noaa.gov/ofs/cbofs/wind_forecast.shtml