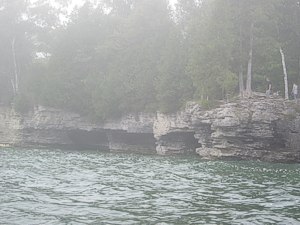 After many years of paddling, this was my first time going on Lake Michigan. I had read some articles about Cave Point in Door County and decided to give it a try.

Launched at Whitefish Dunes State Park. you park right after the guard shack and unload your boat. Move the car to the lot, than return to walk your boat down a short path to the water. The beach was very nice, got there early so not too crowded yet. great launch spot.

The weather, was slightly cool and very foggy. Knowing the wind could come up at anytime I wanted an early start. Girlfriend decided it was a bit much for her so she stayed behind on the beach. rounding the first peak to the north, the waves picked up slightly. crystal clear water, with very shallow depths due to rocky ledges.

Paddling north, my goal was Cave Point. Very short paddle. Not as awe inspiring as I had hoped for, in fact I paddled right passed it thinking this must be the pre-cave formations. After paddling quite a bit farther up the coast I realized that the "pre-caves" must have indeed been Cave Point.

After turning around, the winds did pick up as expected. didn't take long before the waves a short distance from shore were regularly 2 feet with some being 3 feet. I managed to bury the bow of the boat in the waves a few times. Luckily I had recently purchased a spray skirt for the Necky 14 I was paddling. It was a welcome addition for this ride. 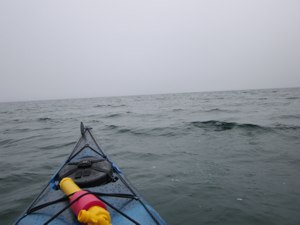 Paddling back I did stop to take a few pics of the caves. Spoke to one of the tour guides who had a group out there. We agreed it was a fun day to be paddling. His group was probably 50/50 on that though...

I did see a few folks out in rec kayaks of 10 foot lengths. They mostly turned around quickly or stayed very close to the shoreline. Personally I wouldn't recommend paddling here without a good boat that has flotation in it. Mine was a Necky 14 and did well a smaller boat would work on a perfectly calm day.

All in all it was a perfect day for me. I love the waves when they come, so this was a good time. The fog did stick around for the whole ride, actually made it kind of interesting. Coming back to the beach I was very glad the girlfriend had decided not to come along. she would have been miserable in her short boat with the waves and slight breeze.

Definitely worth the trip, even though the caves were less than awe inspiring. Great to be on the big water. I will definitely go back up as this was also my first trip to Door County. Next time I hope to find some of the ship wrecks

The park had camping available. I drove home same day.

North on HWY 57 to Door County then a few turns to Clark Lake Rd. Once on the road you will come to a turn that has a sign for Cave Point and a turn to the right with some signage but nothing definite. That is the entrance to the State Park. I drove passed it at first. had to u-turn to go back, as did many others that I seen.