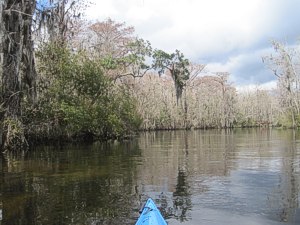 The Wakulla River is one of Florida's crystal rivers. It originates at Wakulla Springs, tucked away in the Edward Ball Wakulla Springs State Park, about 20 miles south of Tallahassee, just off US 98.

The springs are said to be among the largest and deepest freshwater springs in the world, making the area a popular vacation site. The lodge, built in 1937 by financier Edward Ball and restored to its original Mediterranean Revival elegance, has 27 guest rooms, an excellent restaurant, an old-time soda fountain, gift shop, and old-world architecture, making it worth a visit in its own right. The lodge and park are listed on the National Register of Historic Places and are designated a National Natural Landmark.

The large lobby area contains, among other things, the preserved remains of Old Joe, an 11-foot alligator with a peaceful disposition that lived for untold years at the springs and was killed by an intruder in 1960. Estimates of the animal�s age run as high as 300 years.

Within sight of the lodge are the springs. A sightseeing boat takes visitors for a tour downstream. Anhinga, turkey buzzards, great blue herons and other birds are frequently seen along the river, along with the occasional alligator. The guide probably won't tell you that one of the Wakulla Springs alligators killed a 29-year-old man while the man was snorkeling at the springs in 1987. The clear waters were the location for the underwater scenes in the 1954 film, "Creature from the Black Lagoon," as well as several "Tarzan" films featuring Johnny Weissmuller.

But aside from a visit to the park, kayakers on the Wakulla River can only paddle to its boundary, which is guarded by a fence erected by Edward Ball in the 1930s, and posted with a large "Keep Out" sign. Of all the parks in Florida, this one is probably the most restrictive to canoeists and kayakers, who are forced to miss the most attractive three miles of the river.

However, there are six miles of the Wakulla River south of the boundary fence that are worth exploring, and in early March, 2010, as my wife and I drove back to Kansas City and most of Florida was beginning to recede in our rear-view mirror, I decided to do it.

We were staying at the Shell Island Fish Camp in St. Marks, a facility with a marina and cabins that has been owned by the Hobbs family since 1962. The camp is located just upriver from the city park, a popular put-in on the Wakulla River. Our cabin was literally within a stone's throw of the river, and a ramp suitable for kayak launching was within sight, on a small, protected inlet. Using my Hurricane Santee 116 Sport, I was determined to paddle upstream to the state park boundary and back.

The weather forecast was iffy, with temperatures in the fifties and rain showers probable. Dark clouds were building in the west as I put in at 10:45 a.m. and headed upstream in the wide river. Hoping to beat the rain, I nevertheless wore a rain slicker. Within 20 minutes, the rain began, first in gentle drops that dotted the calm water, then gradually increasing to a splashing downpour.

I briefly took refuge alongside the river beside a couple of large cypress trees. When the rain subsided a bit, I resumed my paddle. Despite the rain, the river was beautiful, full of blues and greens and densely bordered by cypress and hardwoods. An occasional great blue heron and several anhinga defied the rain to patrol the river, as I paddled.

The US 98 Bridge was undergoing repairs. I asked a couple of workers, waiting out the rain in a truck, if they'd heard any weather reports. One of them yelled back that he hadn't heard anything new, and I paddled on, the rain continuing to fall in big splashes. 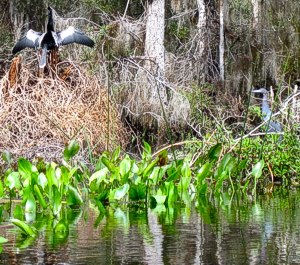 The next leg of my paddle, to the FL 365 Bridge, was four miles. The scenery was consistently wild, with a few breaks in the trees allowing a house and dock to access the river. The rain let up as I paddled by several islands. Egrets and other birds were roosting in downed trees along the bank. Thick tufts of water plants swirled in the clear water as I paddled on, hoping to complete my trip before the weather deteriorated.

Within an hour I reached the second bridge and saw the infamous fence. According to stories I've heard, the fence had survived a court challenge, with a judge actually denying access to canoeists on the grounds that the river above the fence was un-navigable. A sign, posted high on the chain-link fence, warned: "WILDLIFE SANCTUARY. NO TRESPASSING. WAKULLA SPRINGS STATE PARK."

I turned around, paddled under the bridge to a small ramp on the west side of the river, and took my kayak out of the water. Everything was wet with the recent rain, and pools of water were everywhere, but the rain seemed to be over, for the moment, anyway. I ate a light lunch I had brought, and got back on the river.

The downriver paddle was uneventful, at least the first half. However, within a mile of my put-in at Shell Island Fish Camp the sky darkened, and the wind picked up considerably as a front passed through. The river that had been smooth and clear became angry and choppy, with wave-tops splashing over the bow and around the coaming of the cockpit. My boat was bobbing vigorously, and I paddled hard, racing to keep ahead of the apparent storm.

As I approached the inlet leading to the ramp, the sky was much darker, with the wind blowing harder. The good news: it was blowing out of the west, and my course was east-southeast. I paddled into the inlet, out of the wind, reached the ramp, and took out my kayak.

After about four hours, I had accomplished my goal to paddle the Wakulla. I only wish the judge had made the developers take down the fence.

St. Marks is located south of Newport, just off FL 98.

There is a public boat ramp just south of the Shell Island Fish Camp, and another put-in area alongside the FL 98 bridge.