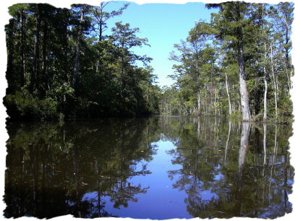 Conditions seemed right for a long trip into the mouth of the Dragon Swamp here on the Atlantic coastal plain of Virginia. The weather report was for clear skies with little chance of rain. If I waited for the bugs to die down any further, it might be too cool for me as well. The tide would help pull me up the river in the morning and then help push me downriver and home at the end of the day. Fresh deadfall from Labor Day weekends tropical storm Ernesto could be expected to block some of the narrower channels of the swamp. So I chose to come up the Piankatank River, entering via the widest section of the swamp then traveling further up the narrowing stream until I hit Route 17. (Or not.)

It was too cool with a stiff headwind and 2 breaking waves as I left the exposed landing in a Prowler 13 SOT at the quaint Freeport Marina. After only a few minutes I was concerned about my very slow progress and budding hypothermia on what was meant to be a long days tour, and asked myself, "What am I doing here?!" But after escaping from the bulkheads and shallows of the point, I headed across the open water with at least the tide in my favor, seeking the wind shadows of the wooded opposite shore. Many gulls were in the air, some of them making shallow dives to catch a morsel. Regaining my composure, I noted that the water was warmer than the air, half as salty as the ocean, with about 2 visibility.

Paddling along the calm northern bank offered a view of the woods and birds, including a juvenile bald eagle. Two watermen were pulling crab traps with a boat hook into a vessel not much larger than my kayak. High tide was approaching, so the limited beachcombing opportunities of the upper Piankatank River had shrunk to precisely zero. Startled great blue herons squawked their displeasure at being disturbed and flapped away, but cursed by tiny brains, would usually fly further up my route where I was sure to disturb them again in a few minutes.

Just a few miles upstream of the Freeport Marina near the small riverfront community of Holly Beach, the water was cooler, less clear, and virtually fresh. Wide beds of sediment-discolored coontail reached almost to the surface. The large fish seemed to love the area with its faint nip of salt, the changing tide, and the baitfish sheltering in the weeds. They frequently swirled loudly around my kayak. Some of the fish in this area were scary-big, exposing 3 feet of body while doing sea-serpent rolls, or leaping out of the water and landing with a pronounced crack! After one such commotion I found a 10 catfish floating, stunned and belly-up, only to swim away as soon as I poked him. At least some big fish eat big meals. 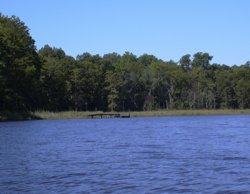 Pushing further upriver, the gulls thinned out. The kingfishers multiplied until even they felt crowded and were staging aerial dogfights, twittering like a childs rapid-fire ray gun. The Chesapeake Bay blue crabs were everywhere there was a muddy bottom on which to hide. The woods became lusher and the few homes were often beautifully integrated into the shoreline on large lots. As I approached a low marshy island in the middle of the river, a flock of wary mute swans patrolled offshore. This island marks the beginning of a wide, marshy area at the threshold of the swamp.

Not long after the wide marshy area is crossed by a power line, you have to bear right at the large duck blind to enter Dragon Swamp. (Im writing in 2006, so the pilings at least should still be there after the next few hurricanes.) The shore is very low and flooded here, with many large bald cypress trees at different stages of life. The mouth of the Dragon is a scruffy looking area, where fluctuations in water level and salinity have severely stressed or killed many small trees that had gotten started during more favorable conditions. Yet this area is a boon to diverse and thriving populations of woodpeckers. Snowy egrets also stalked the marshes in this area.

Further on, one enters the belly of the Dragon. [PHOTO] By this time the tide had crested and there was no current to follow. The higher water level only multiplied the number of channels, but I had no problem following the main channel. (The few who make it home always say that). Of course a good map, compass, GPS, and cell-phone are recommended, but this part of the swamp is pretty tame. In most of this section, the channel was at least two boat-lengths wide (26) which gave lots of elbow room while still providing excellent wind protection. The only insects I noticed were, appropriately, dragon flies.

Around every corner, basking turtles would spill off their favorite logs into the cool water and then line up to get back on again. Its tough being an aquatic exotherm in the Fall in a stream where the sun penetrates only a few hours a day. You could sell tickets to these basking logs. No snakes were seen on this trip. Even watersnakes cant tolerate being wet all the time, so they may have temporarily fled to higher ground in the surrounding forest. Many small birds flew from tree to tree. Infrequent deadfalls were easily skirted without portaging and were even a little fun (thanks not to luck but to the hard work of human caretakers with chainsaws).

In the few locations where the water was illuminated and warmed by the sun, I was surprised to see the sandy bottom in up to 4 of reddish, tannin-stained water. Once I even watched a large slider turtle swim below me. The combination of current and tide flushes the bottom clean. That hard sandy bottom means you can stand up in the shallows, something nice to know since there may be little non-submerged ground at high tide other than a few crude boat landings. Native yellow pond lilies (spatterdock) grow on the margins of the channels.

I could hear the traffic noises from Rt 17 about half a mile away, and was looking forward to stretching my legs, when my luck ran out and I encountered a double dead-fall. From one of the trees, poison ivy hung down to the waters surface. In the woods bordering the stream, Virginias unofficial state vine was already turning to beautiful fall colors, but here it was a thick green waterfall. Since the shoreline was flooded, it would have been easy to paddle and wade around both trees. But I was 4 hours from the boat landing, would have to DEET-up for chiggers before bushwhacking near water this fresh, and the tide has reversed a half hour earlier, so it seemed like an auspicious time to turn around and go with the flow.

Using, rather than fighting, the mild current felt like I was being flushed out of the swamp along with a few leaves and remaining traces of sediment. Turtles scattered as I shot around corners. Submerged logs produced small riffles. Startled great blue herons would beat the thick swamp vegetation with their wings on take off, sounding like a large animal crashing through the underbrush. Great blue herons arent particularly attractive, and their startled call makes them sound like a B-movie pterodactyl, but I had to admire their ability to succeed from blackwater swamp to salty Chesapeake Bay.

At the big marsh at the exit of the swamp proper, the wind had died to a low breeze and the air had warmed. The big birds were riding the updrafts along the border between the tall trees and the marsh. It was hard to believe this was the same trip that had sucked so badly the first half hour. A red-tailed hawk screamed repeatedly to let a turkey vulture know who was boss. After a 5-10 times, the red-taileds scream becomes the outdoor equivalent of fingernails on a chalkboard. He thankfully shut up when more vultures showed up. The mute swans were nowhere to be found. 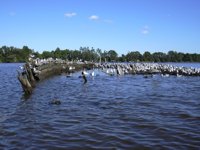 By the time I got back to the Holly Beach area, the water level had dropped enough to expose a large, old wooden shipwreck exposed mid-river near Holly Beach. This was a very popular hangout for the gulls, and not wanting a messy shower, I quietly drifted by without paddling. The number of gulls per acre of water is high in the middle and upper Piankatank River. Copious gull poop is probably the secret ingredient in the sea foam that covers the wave-washed shores.

The few small sandy beaches exposed in this area only confirmed my impression that the upper Piankatank is not for beachcombers. Small, ancient deposits of nearly pure sand erode in one place and are transported to another place to make small, modern beaches of nearly pure sand. Theres not a rock or fossil in sight. And what might otherwise be great diamondback terrapin habitat suffers from a lack of suitable nesting beaches.

Still, despite some shortcomings, this trip ranks as one of my all-time favorites. If you like wildlife (birds, fish, turtles, and did I mention birds?), this is a great trip in the early fall. In only 6-8 miles, you pass through diverse and rich habitats. With lots of short breaks and small side-trip, this was a 17 mile round trip taking 8 hours in a somewhat pokey Prowler 13 SOT. (The gel seat is truly an enabling technology.)

A more practical itinerary would be to arrange a shuttle by leaving one car at Freeport Marina on the south shore of the Piankatank River and another car near where Rt. 17 crosses Dragon Run. When youre at the Freeport Marina, note the architecture of the some of the standing farm buildings. This area clearly has deep roots.

Freeport Marina. Bathrooms in the big old house with the wide porch are open April-November.

The Thousand Trails campground just west of the Freeport Marina is perfectly situated if you happen to be a member. Compared to the Freeport Marina, its a few miles closer to the Dragon Swamp which would be a big advantage in a round trip. The river is narrower there, so youre also better protected from the winds. The lone kayaker that I met said hed been making short trips out of Thousand Trails.


If you're not already a member of Thousand Trails, forget it. They're so gated and exclusive, you'd think it was a nudist colony for super-models.

The Rt. 17 put-in is where Dragon Run forms the border between Gloucester and Middlesex counties. The Freeport Marina landing is off Rt. 198 which parallels the southern shores of the Pianktank River.

The Dragon has friends at http://www.dragonrun.org/

I didnt find the free aerial photos available on the web to be very useful. They were either underexposed for this particular area or only available at poor resolution. Next time Ill photocopy the sections I need from a map of Middlesex and Gloucester Counties (eg, the ADC map of Greater Hampton Roads).